Our 3rd trip of the year began to take shape when Vermont got pounded with early season snow in November.  That was looking pretty good from dry, smokey California where we were reading about firestorms and waiting for snow in Tahoe. With our full Epic passes this year, we got “free” skiing at Stowe, VT. So we decided to squeeze in a  trip to knock off 3 of the best Vermont areas:  Stowe, Sugarbush, and Mad River Glen. The only time to do it was early January because of our other commitments. And there were two big risks we were taking: extremely low temperatures and winter air travel with connections. 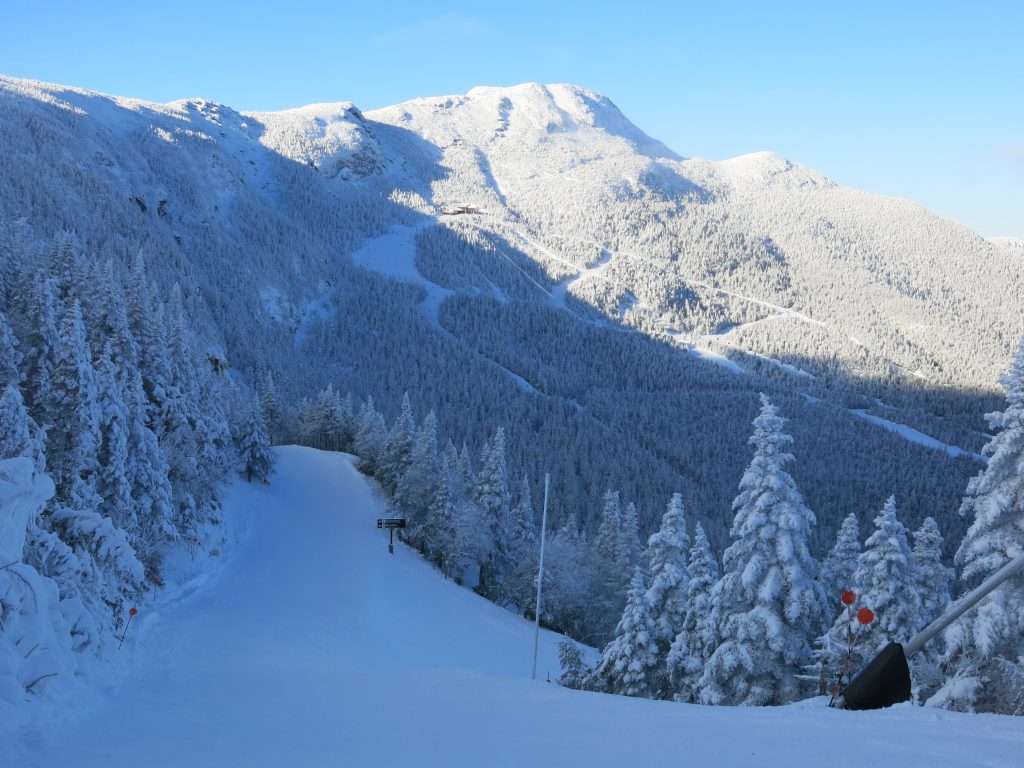 Luckily it all worked out, and more.  Our flights were a non-event. And after a month of no snow and lots of rain, Vermont got their biggest snowfalls of the year in the 2 days before we got there. When we were landing in Burlington, we heard a returning local complaining: “I can’t believe how much snow fell while we were gone.  Yuck!”.  We were loving it. 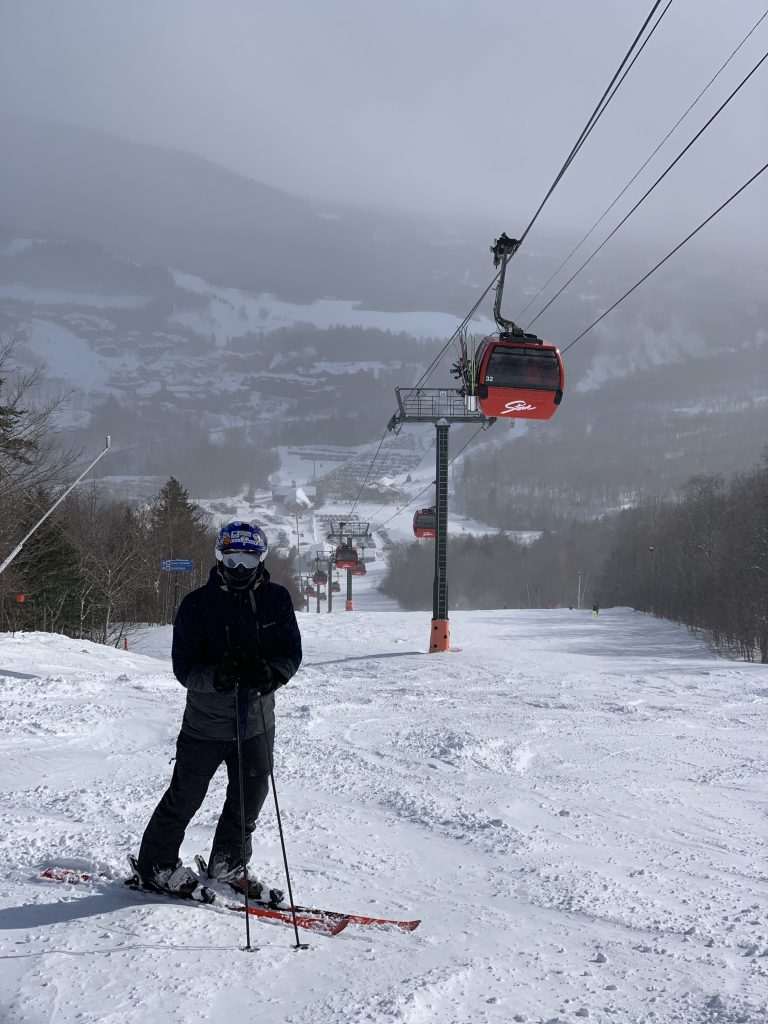 All covered up at Stowe, January 2019

Our first day at Stowe featured 8″ of fresh on top of 16″ the day before that.  The only problem was the temperatures and wind.  It was -10F at the Mt. Mansfield weather station and was blowing 50mph, which is a wind chill of -45F.  That is serious danger territory, where skin freezes in 5 minutes.  We had double face masks with absolutely zero exposed skin.  The problem is breathing because you have to breath through the fabric and your goggles get fogged.  Everything becomes difficult at those temps:  Skis don’t slide well, goggles are fogged, fingers frozen so badly that you can’t operate a camera or phone (which are dead anyway because of the cold).  Taking your gloves off for a minute for a picture is a painful experience.  Chemical hand warmers are an absolute necessity.  Every picture on this page was taken at great expense and personal torture! 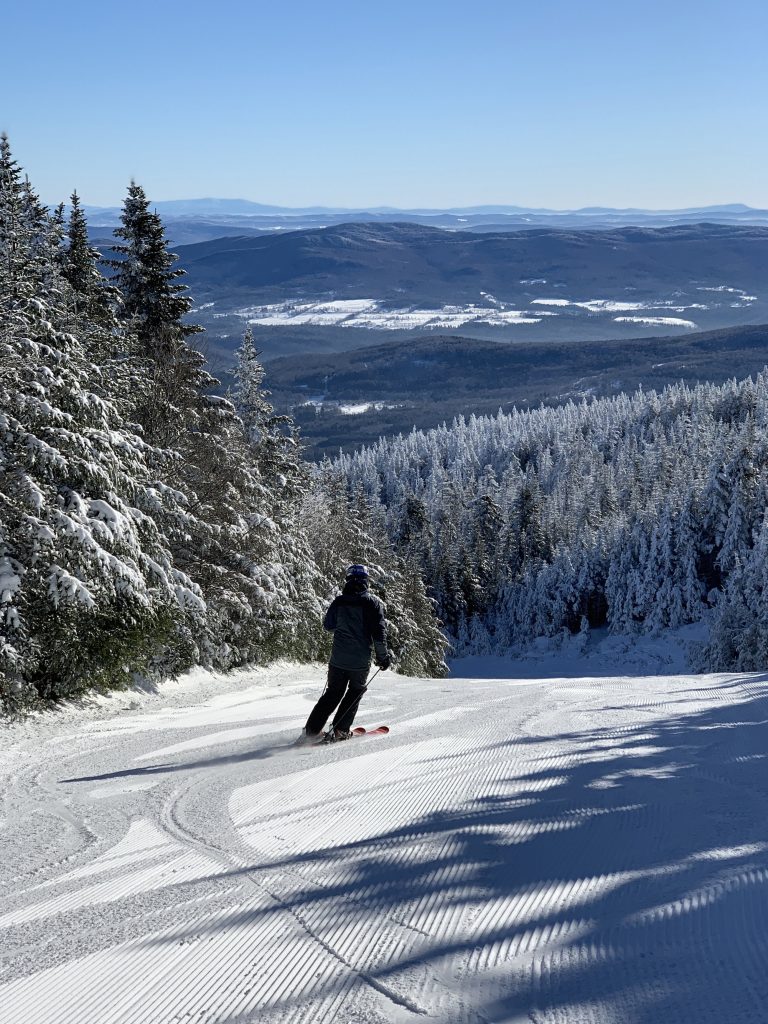 Nearly untouched groomer at Mad River Glen at 10:30AM, January 2019

Oh, but the skiing was great!  No crowds, everything was open, and soft snow almost exactly the quality we see in Tahoe…pretty much as good as it gets in the East.

By the 2nd day we were more used to it and started to really enjoy ourselves.  We skied about 90% of the named runs at Stowe over 2 days, including the VERY steep front 4 runs: Starr, Goat, National, and Liftline.  I have to give the scary nod to Starr, which was an absolutely smooth slippery slope that you would NOT want to fall on.  I wouldn’t exactly call it ice, but it was as close to ice as is possible to get an edge into.  The lower part was fantastic though, as were the others.  This was a bucket list item for me because we used to ski Stowe regularly when I was a kid growing up in Buffalo, and I always looked at that run as something to aspire to be able to ski.  Mission accomplished 42 years later! 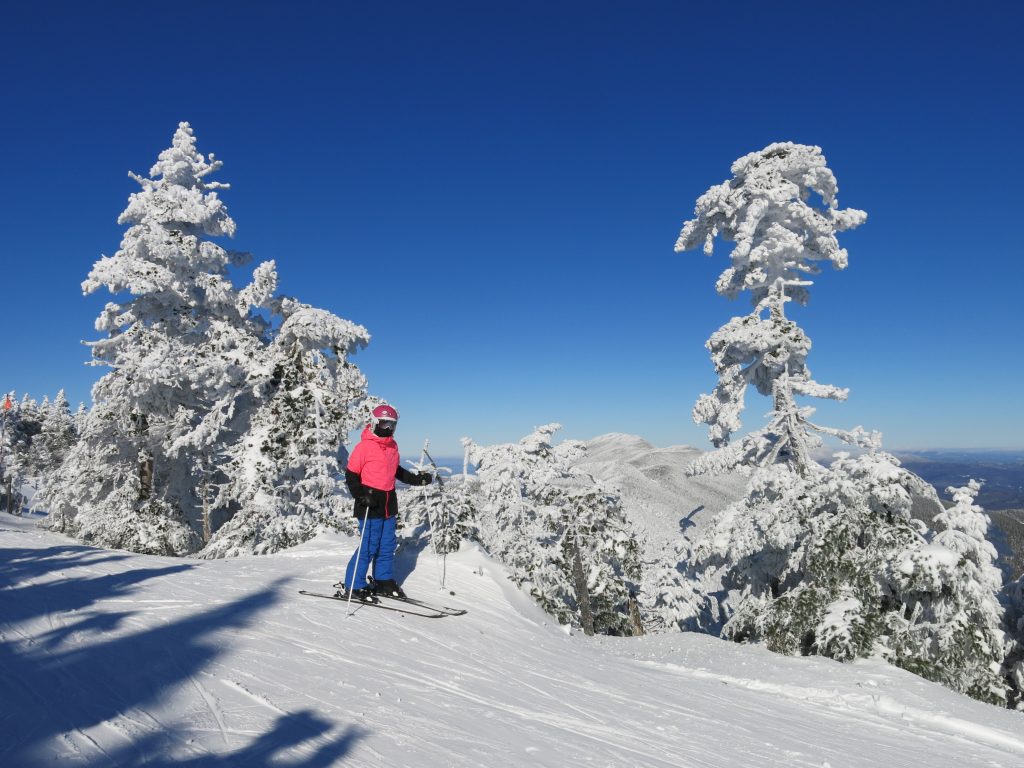 The namesake trees at Sugarbush, January 2019

After 2 days at Stowe, we moved on to Sugarbush.  Sugarbush is a larger resort spread over 2 distinct ski areas connected by a lift that was NOT running when we were there.  That meant that in order to get the full resort experience we had to get in the car and drive over from the Lincoln Peak side to the Mt. Ellen side.  Both sides of Sugarbush are great with a distinct character and plenty of advanced to expert terrain on both.  We would have liked to have spent more time there. 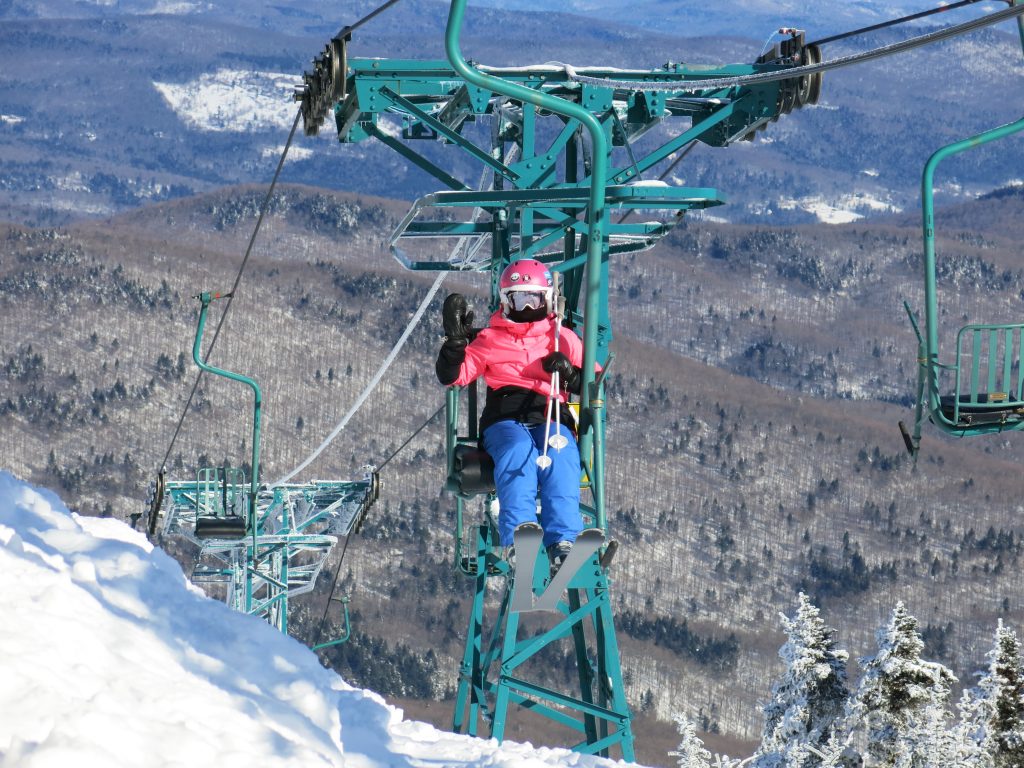 The last day was at Mad River Glen.  The last time I skied there was in the mid 70’s.  It hasn’t changed much.  This is one of North American skiing’s historic places, and it is a truly unique experience.  If you ask people you meet at Stowe or Sugarbush what their favorite Vermont resort is, they might say it’s Mad River Glen. Nobody can really put their finger on why that is exactly.  We think the 1948 single chair is a big part of that, being the only single chair remaining in regular operation in North America.  Mt. Eyak in Alaska still runs a single that was purchased and moved from Sun Valley, built originally in 1939, but it only runs a few days a year.

Mad River Glen features what is often rated as the most difficult run in the East: Paradise.  Although not super steep by Western standards, it’s full of ice falls, rocks, and tight trees and believe me it will be a serious challenge getting down that with intact dignity at the bottom.  There are better runs there though, and we ended up skiing about 75% of this small resort.  There were a total of about 20-30 people skiing that day so we felt like we had the place to ourselves.  It was a surreal experience and I recommend it to every skier that wants to experience what skiing used to be like. 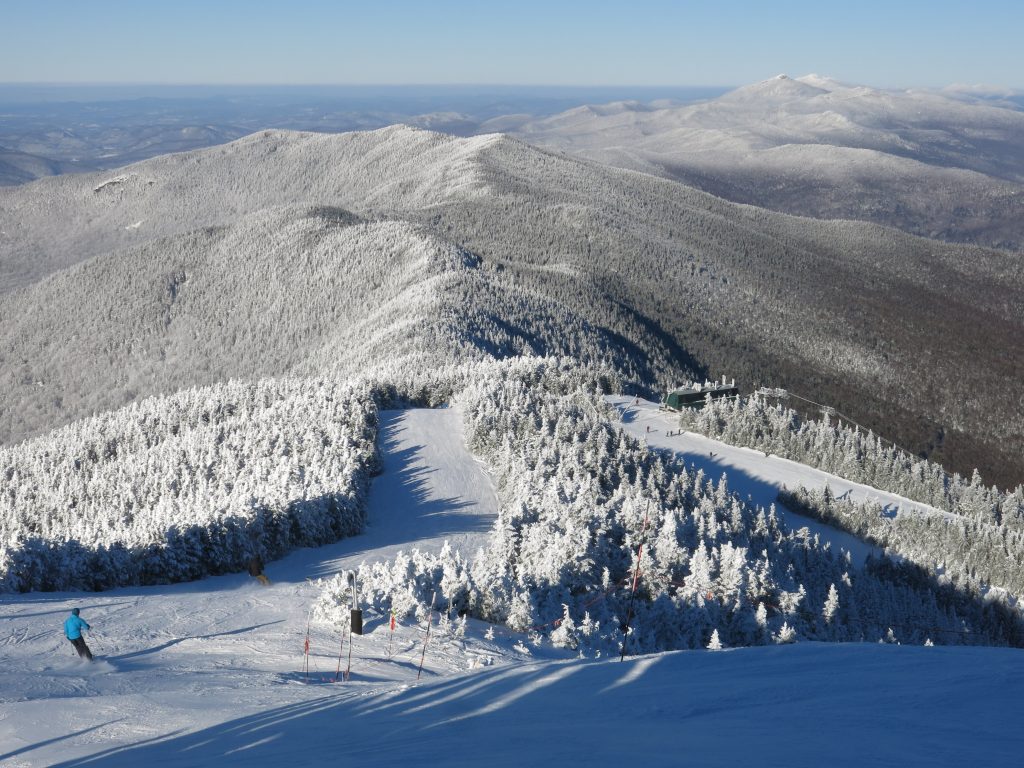 We always learn something new after our ski trips. Because of our really positive experience with this trip,  we gave some more thought to what it is that makes a resort stand out. We decided that, while snow and acreage are important, what really makes a place for us is vertical drop.  So we made some changes to the 100 list. We have added back Whiteface, New York, which has the biggest vertical in the East, and Sunday River, Maine which is a huge, popular resort that everyone keeps telling us must be on the list.  Removed were Eldora and Monarch Colorado which are at the bottom of the list for vertical drop and fell under the 1,400 vertical lower limit.  We also removed Brian Head, Utah which has a real continuously skiable vertical of only 1,100 feet to make room for Tamarack, Idaho. Tamarack was added back because they are re-installing one of the vital lifts that was removed when the resort was foreclosed on 10 years ago. We had previously skied Brian Head so after all this shuffling we are back to 76 resorts completed.

Lots of thought has gone into the list and we think it’s pretty close to final now.  We may make more changes later as we finish the last 24.  There are also 2 new resorts being planned in British Columbia that may need to be added to the list if they are built in time:  Valemount and Garibaldi.  These will be huge resorts and when complete will rival many of the best resorts on the list now. 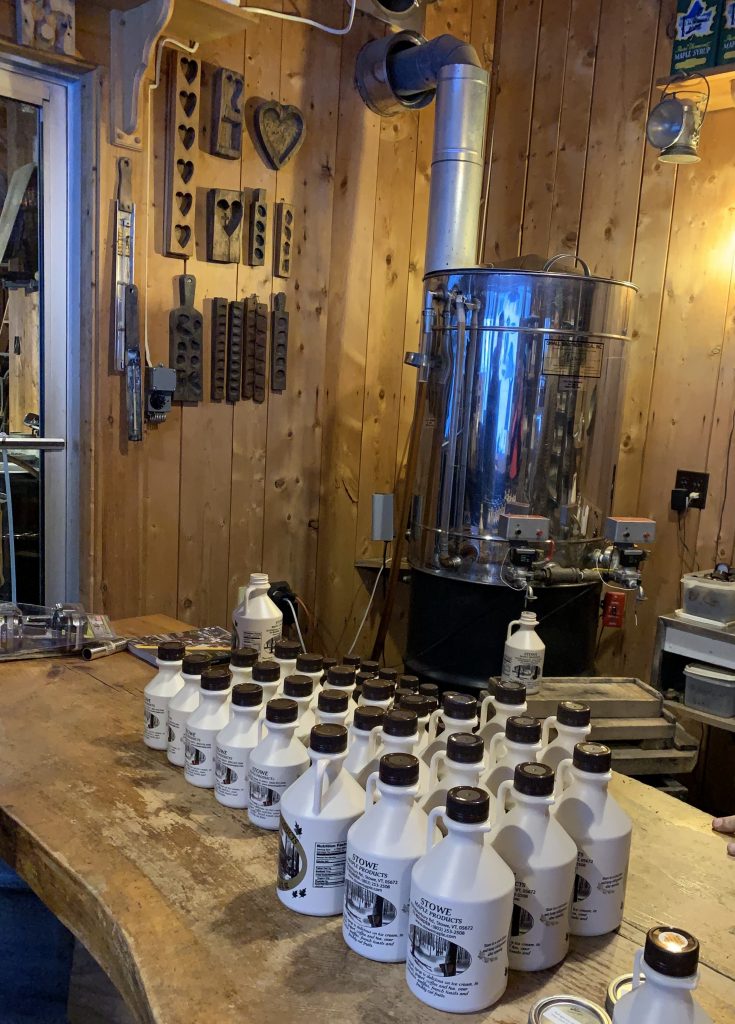