Lost Trail Powder Mountain has a legendary reputation for untracked powder due to its location far away from any population centers, plentiful snowfall, and the fact that it only operates 4-5 days a week. It is located at the top of Lost Trail Pass straddling the Idaho and Montana border. Most of the skiers come up from the Bitterroot valley north of the pass, but we came up from Salmon, Idaho on the south side. This review is based on one visit during perfect powdery conditions. 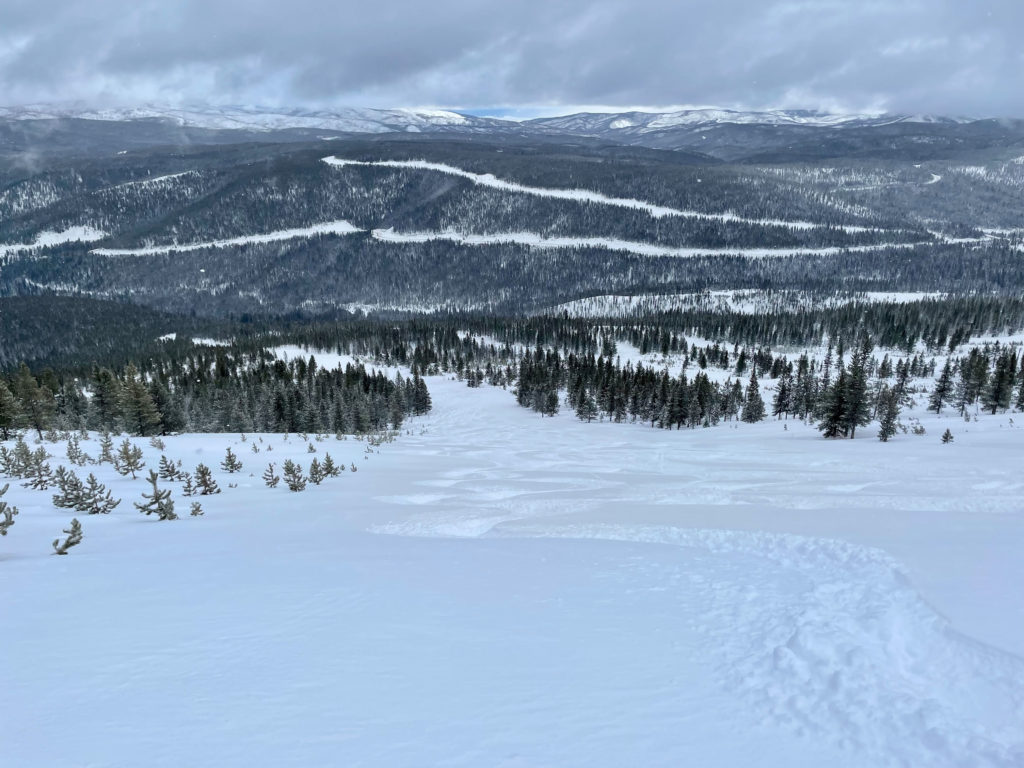 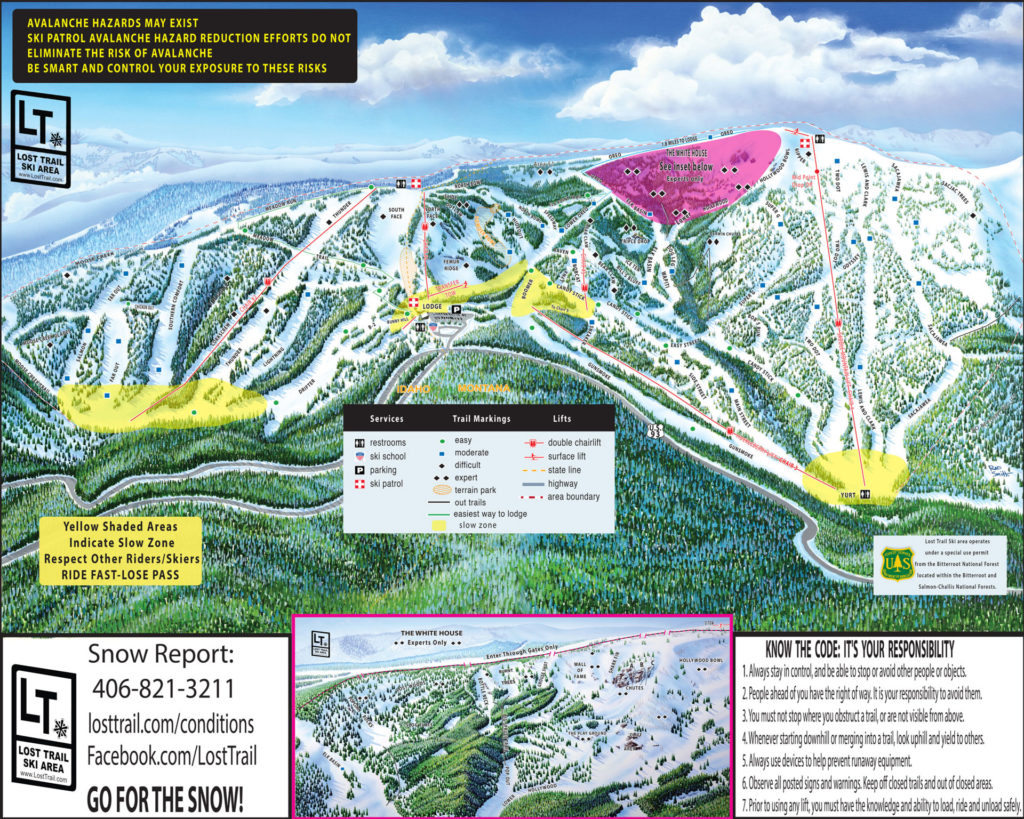 We had one of our most fun powder skiing days ever at Lost Trail.  The typical powder day there is 4-12″ — Not so deep that you will get stuck and just enough to completely erase the previous day’s tracks and let you zip down mellow terrain at high speed.  Our day was 6″ overnight and 10″ total for 24h.  This doesn’t sound like enough but the place gets so little traffic that big bumps don’t form and a small amount of fresh on top of the smooth surface does the trick. 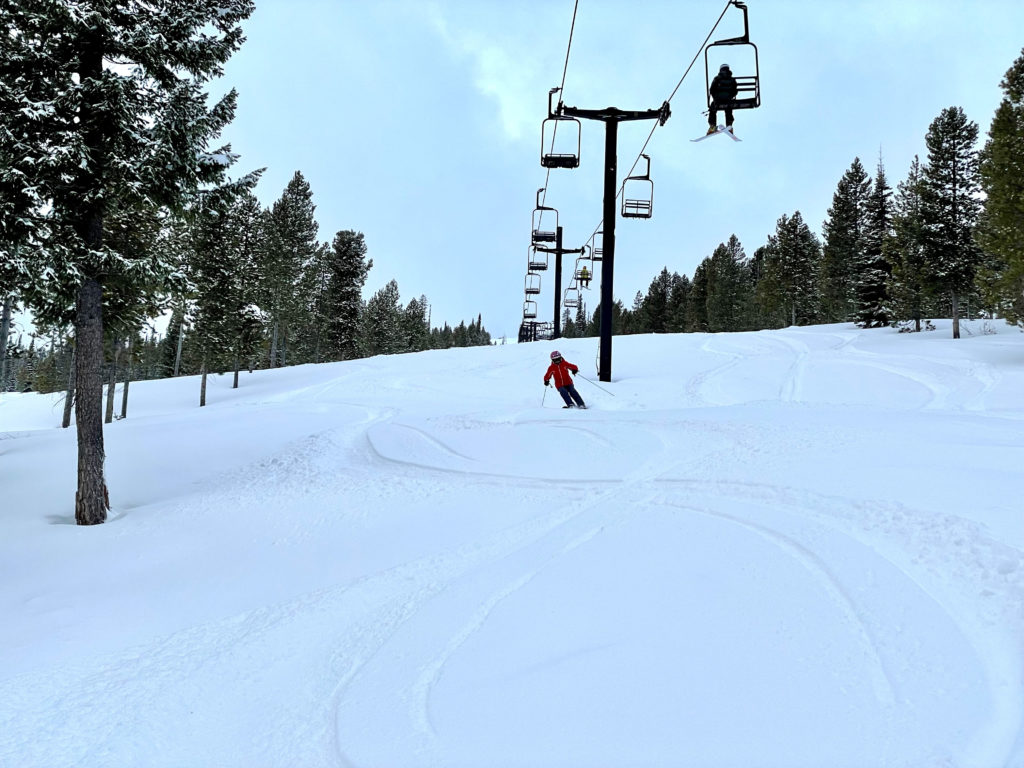 We stayed 40 miles away in Salmon, Idaho because we were on a south to north trip up from Utah and Salmon is the last place before the resort with any lodging.  The drive up in the morning was nearly empty of any other cars on the snow-packed roads.  It’s a pretty long drive though, and points out the remoteness of the resort and why it’s so empty.  To the north, the closest lodging is about 30 miles, so almost as far.

The base area straddles the Idaho/Montana border right at the top of Lost Trail pass.  There is only one lodge building (which really needs an update!) and one ancient double chair #1 that gets you to the 2 other ancient double chairs.  There were only about 20 people queued up to get first tracks when we got there just before the lift opened. 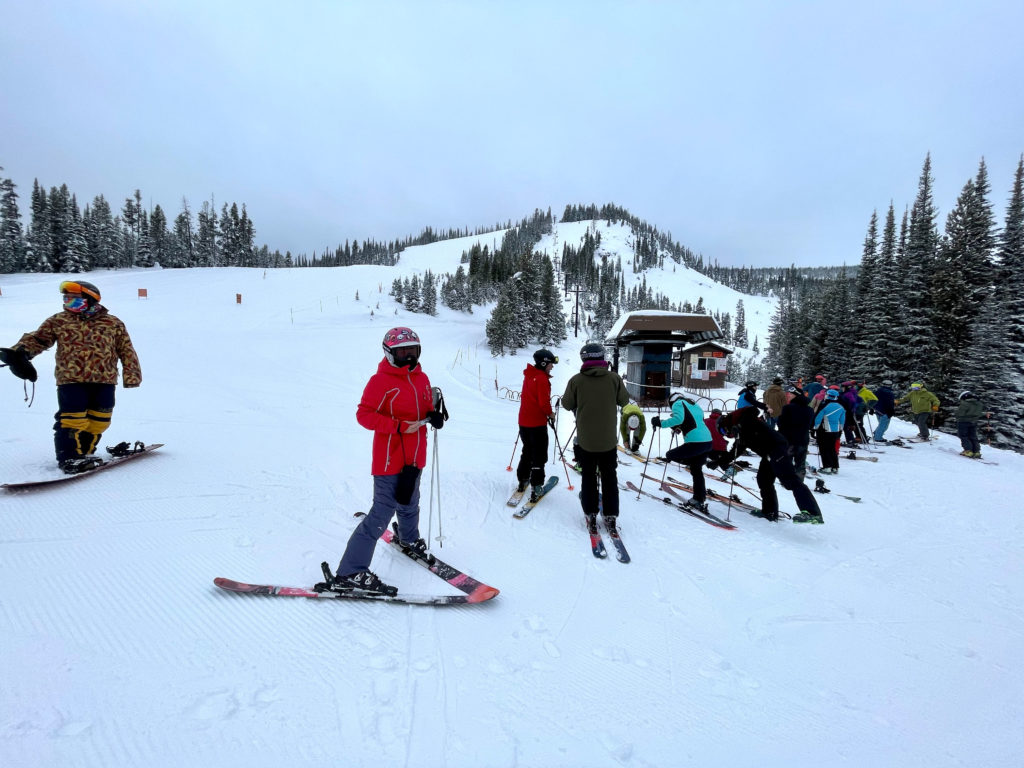 The Saddle Mountain chair #4 is what put Lost Trail on our radar.  It’s a relatively new addition to the resort added in 2001.  The chair itself was made in 1969 and was relocated from Grand Targhee.  The terrain off Saddle Mountain is ideal for skiing with a consistent mostly intermediate pitch, and notable in that there are vast areas with perfectly spaced trees for powder day fun.  It’s almost as if they were gladed or planted that way after fire clearly swept through the area long ago. 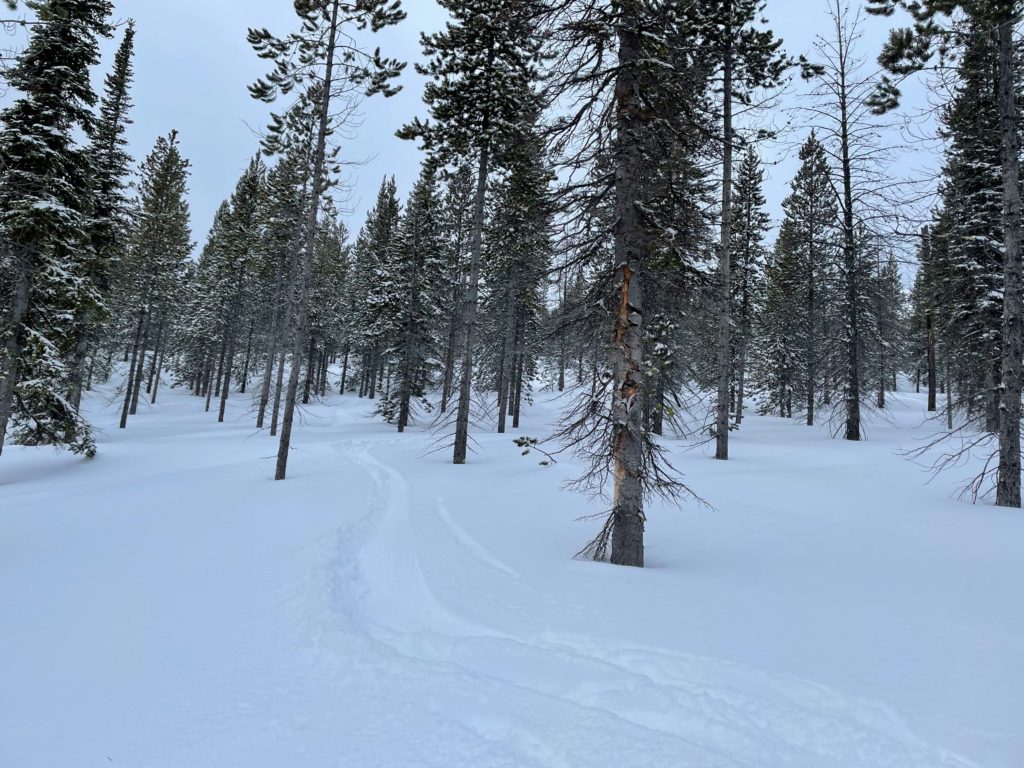 The chair also gives you access to the steepest double-black terrain in “The White House”.  We ran out of time to ski that zone but it looks good.  Instead we took many, many runs in the trees next to some of the groomed blue runs in that zone.  This was the first time we really didn’t want them to groom ANYTHING though.  The powder was just too good. 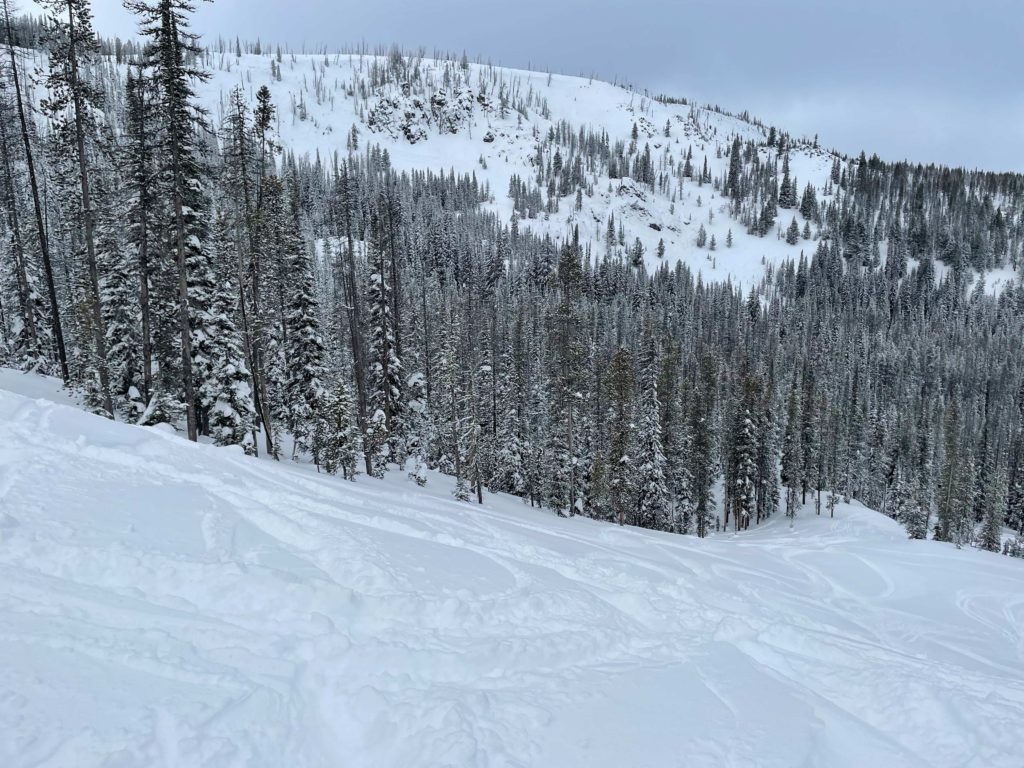 After lunch we lapped Chair 2 on the Idaho side.  That chair accesses some more traditional single black runs like Thunder and Corkscrew plus another set of great blue runs.  We also sampled the Moose Creek glades which were steep less skied in late in the day. 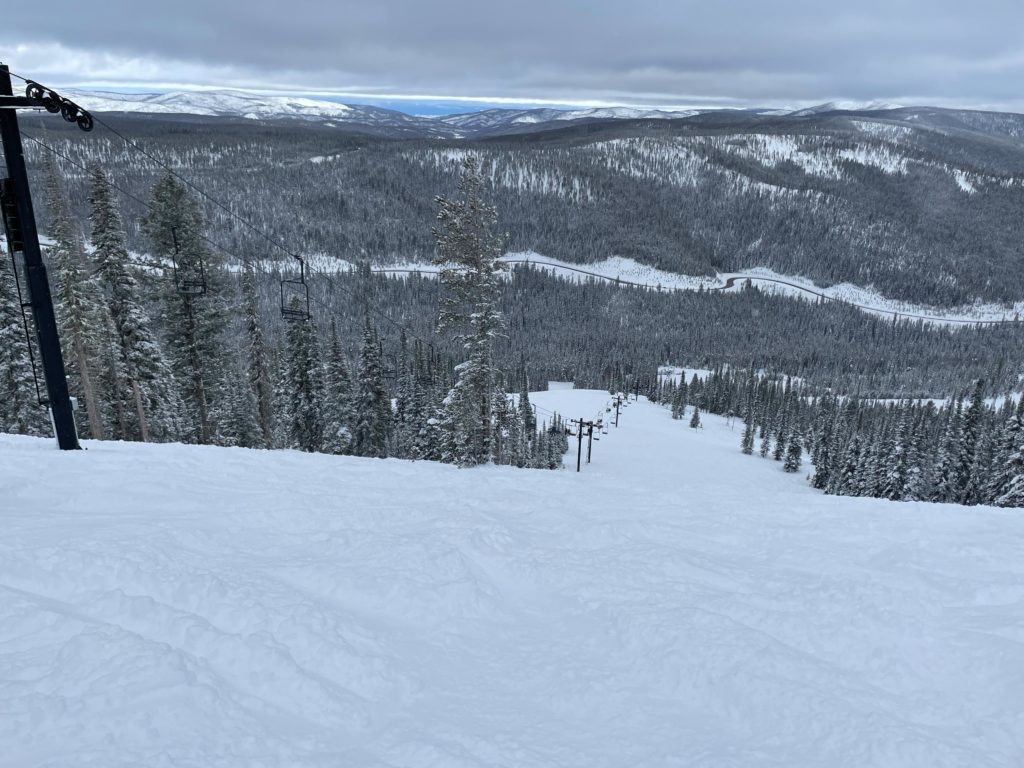 Chairs 2 and 4 are the main course at Lost Trail, because Chair 1 has a lot less vertical than the other 2 and mostly serves single and double-black terrain.  We took a run down South Face at the end of the day which looks like it builds up some bumps if you are looking for that. 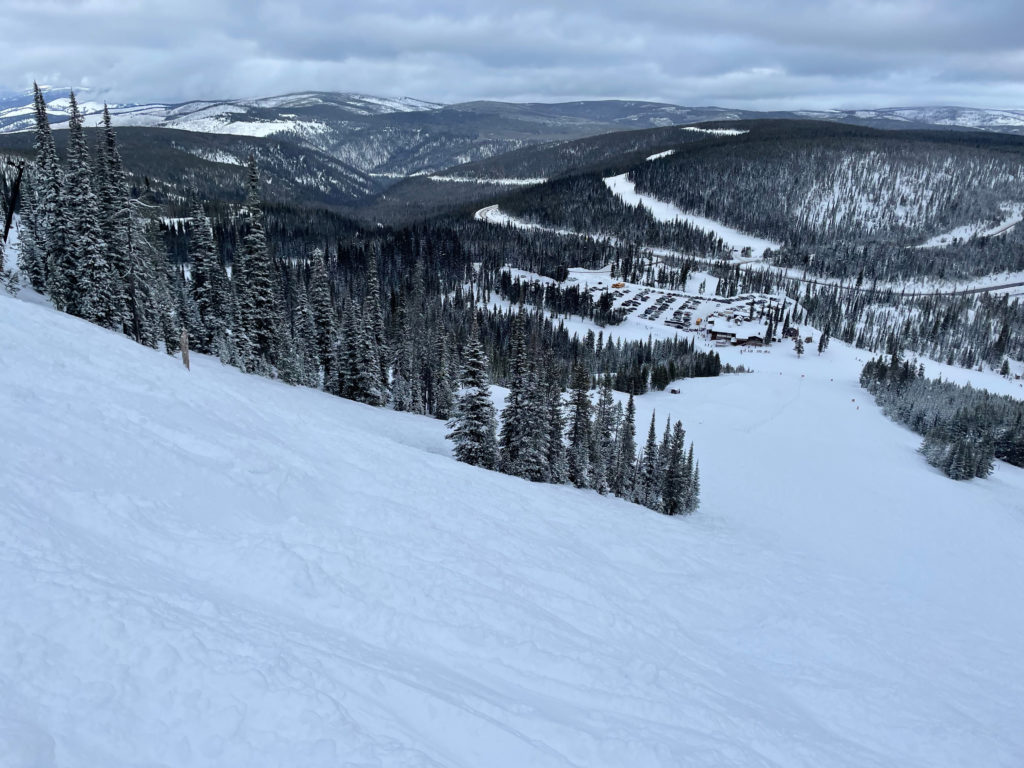 I’m not sure why these exist and if they ever run, but they weren’t running on the Friday we were there.  They don’t seem to be needed and don’t seem to even be built in the right places.  Strange.

There are a lot of interesting nooks and crannies in the 1800 acres that we didn’t explore at all.  Realistically it would take a whole season to explore the place because the widely spaced trees allow skiing much of it.  This is one of the major plus factors of the resort. 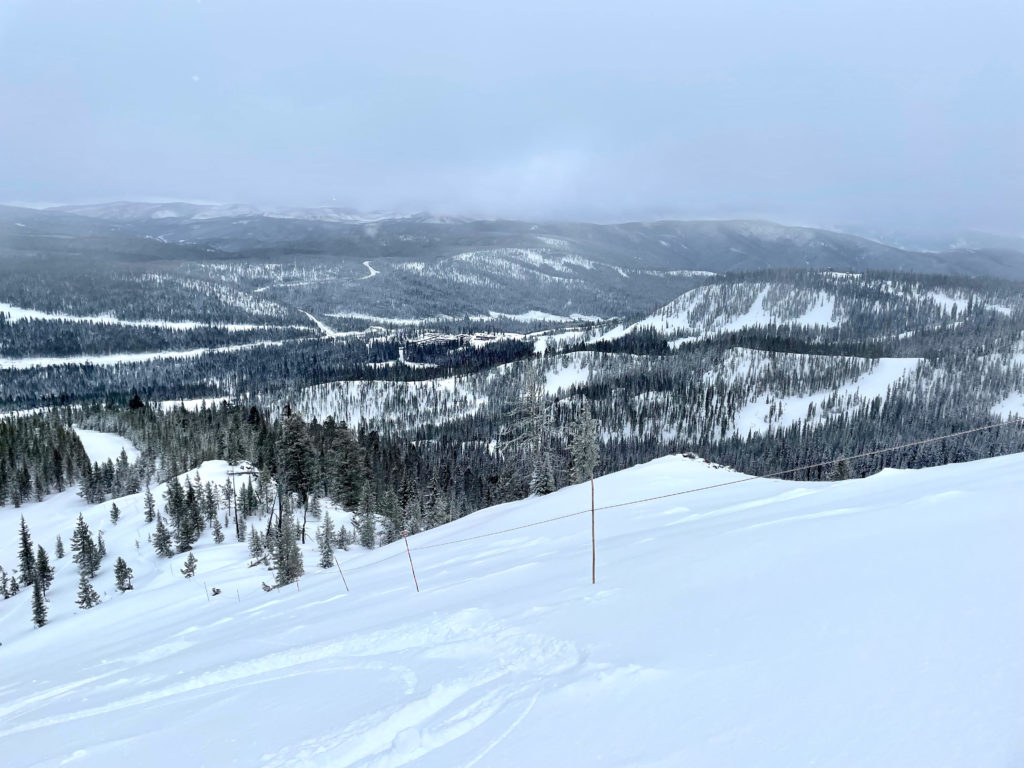 This is a bare-bones family operation so it was pretty surprising the amount and quality of grooming that was done.  Each chair had a few of the major runs groomed.  It seemed like just the right amount of grooming because you don’t really go to Lost Trail for that type of experience anyway, and with the low skier traffic it doesn’t need much.  A 2-day old groom is still going to ski well. 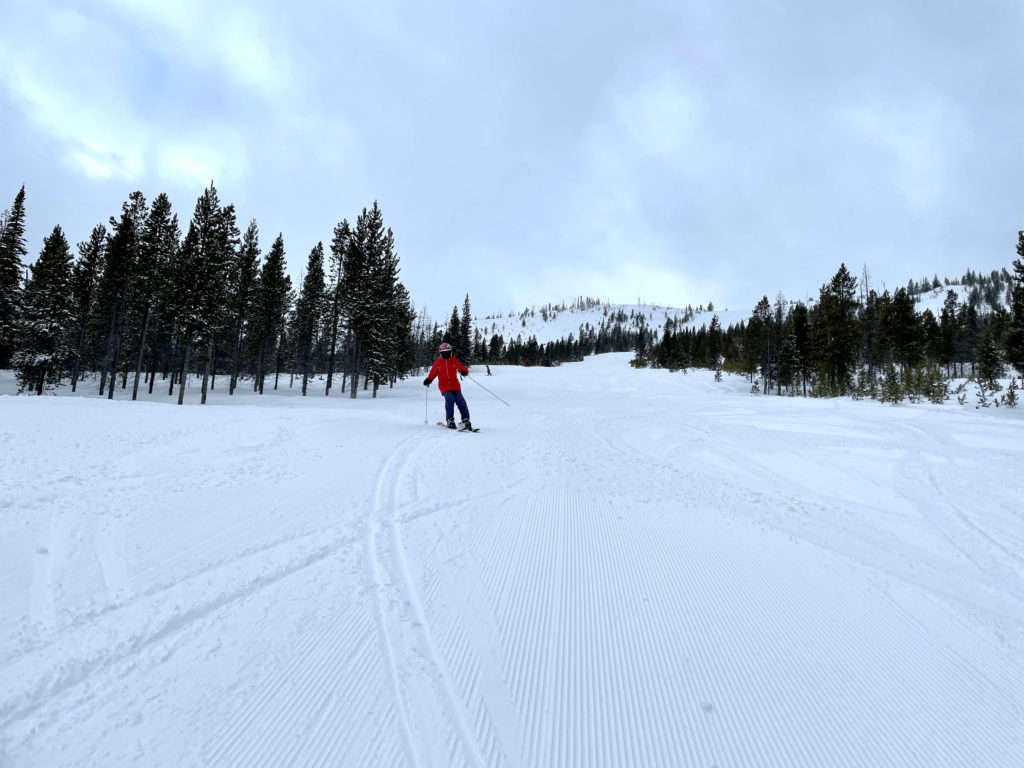 Base Lodge and Food

The base lodge is truly a run-down relic.  It’s too small for even the sparse midweek crowd we encountered.  Food was actually not bad for traditional ski area cafeteria fare though, and you definitely won’t be breaking the bank to eat there. 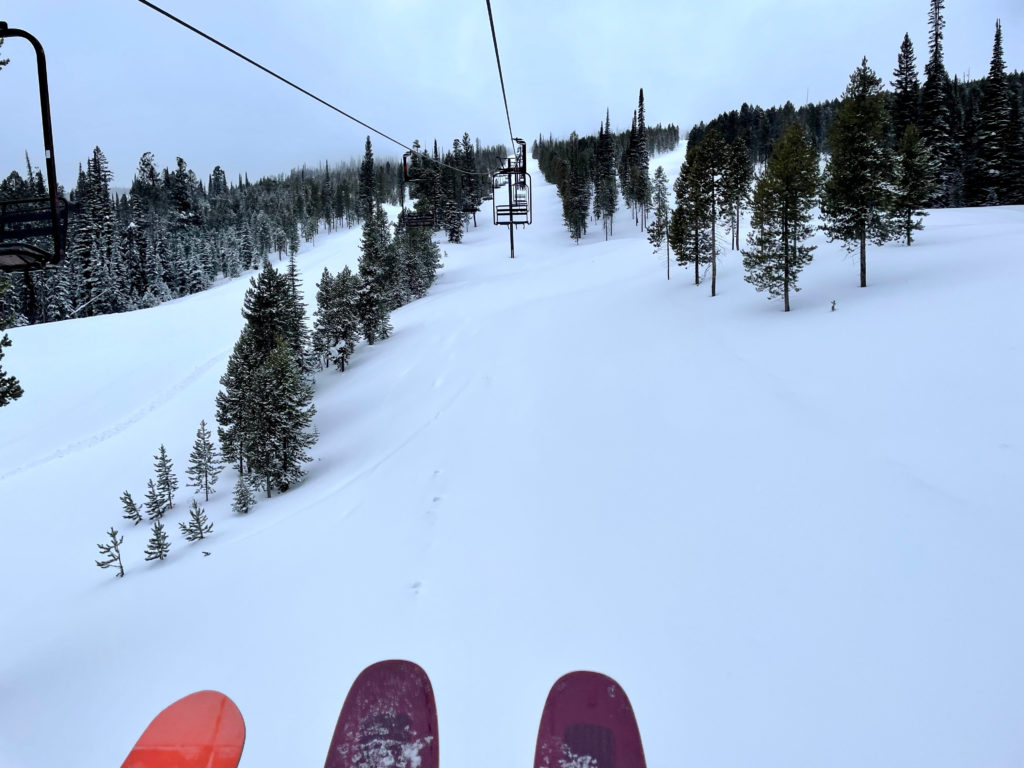 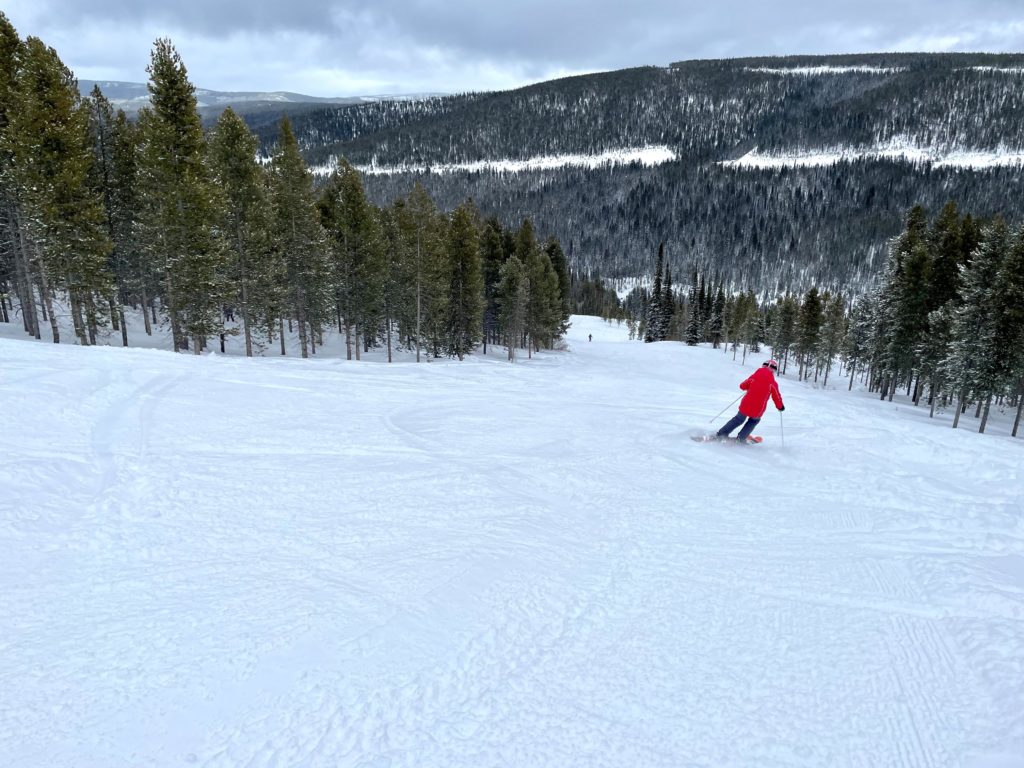 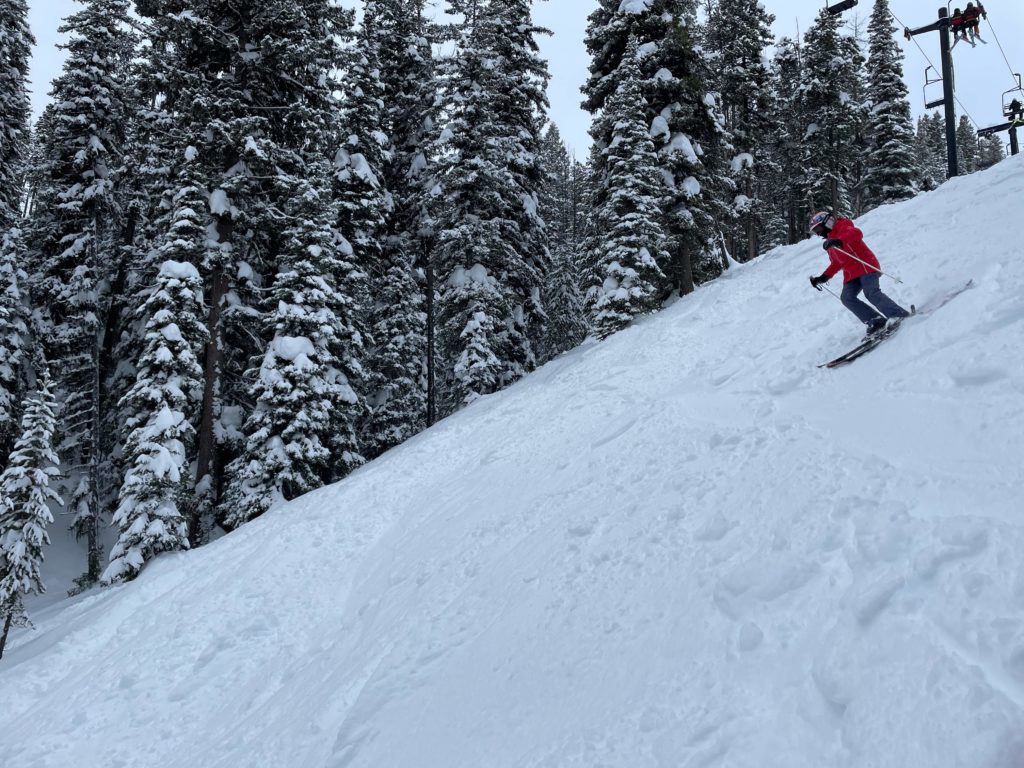 3 stars is a pretty high rating for a resort like this with lifts and lodges that likely were around when I learned to ski 52 years ago.  However, it deserves it because Lost Trail was probably the best of the relatively unknown resorts we found on the project. The ski terrain and typical snow conditions are excellent, and it’s likely you will never have to stand in a line. It’s a place you go for skiing and nothing else. Do yourself a favor and make the effort to ski this mountain! 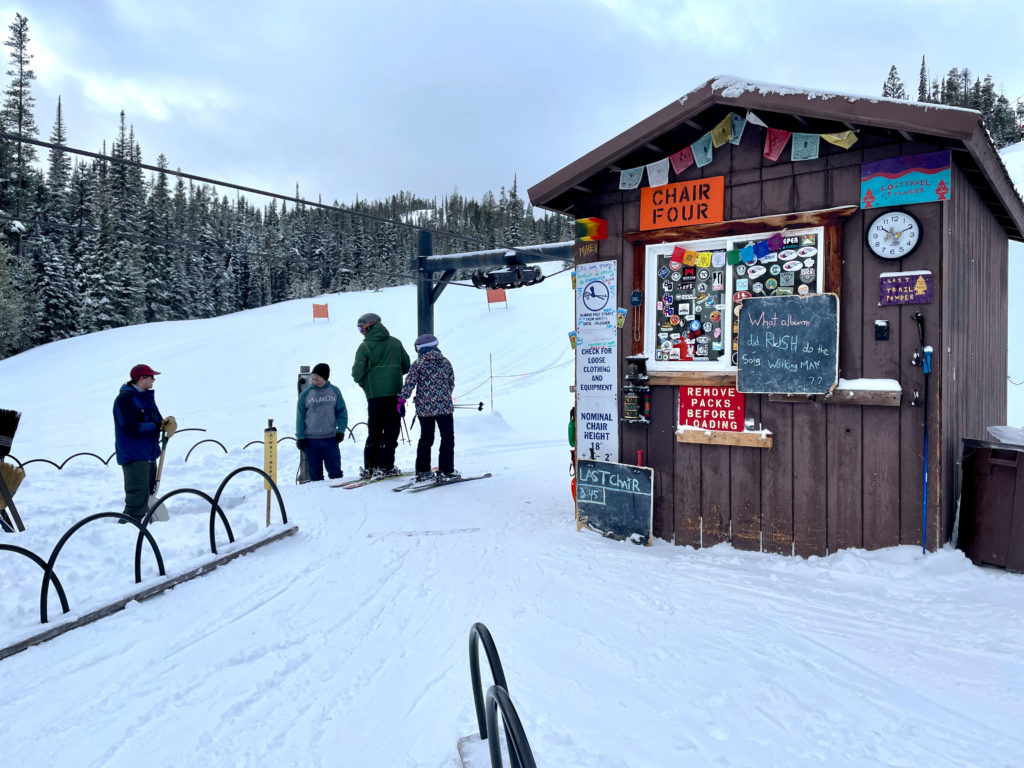