Steamboat is one of the most iconic ski resorts in Colorado with perhaps the largest Colorado ski resort town right at the base.  This review is based on a mid-December visit with good conditions and a couple of visits in the 80’s. 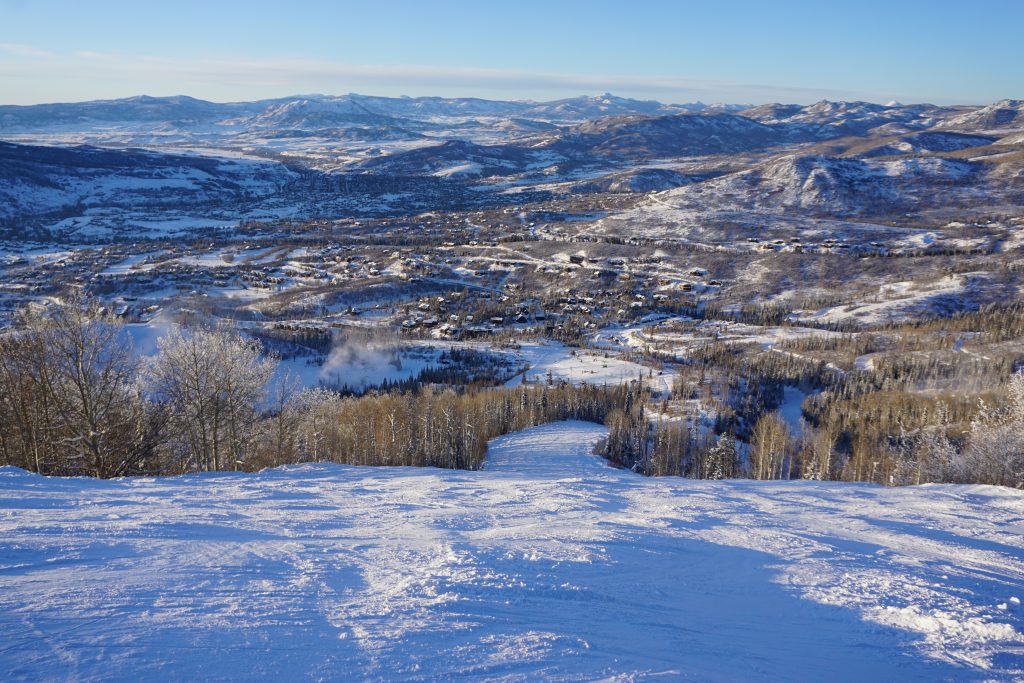 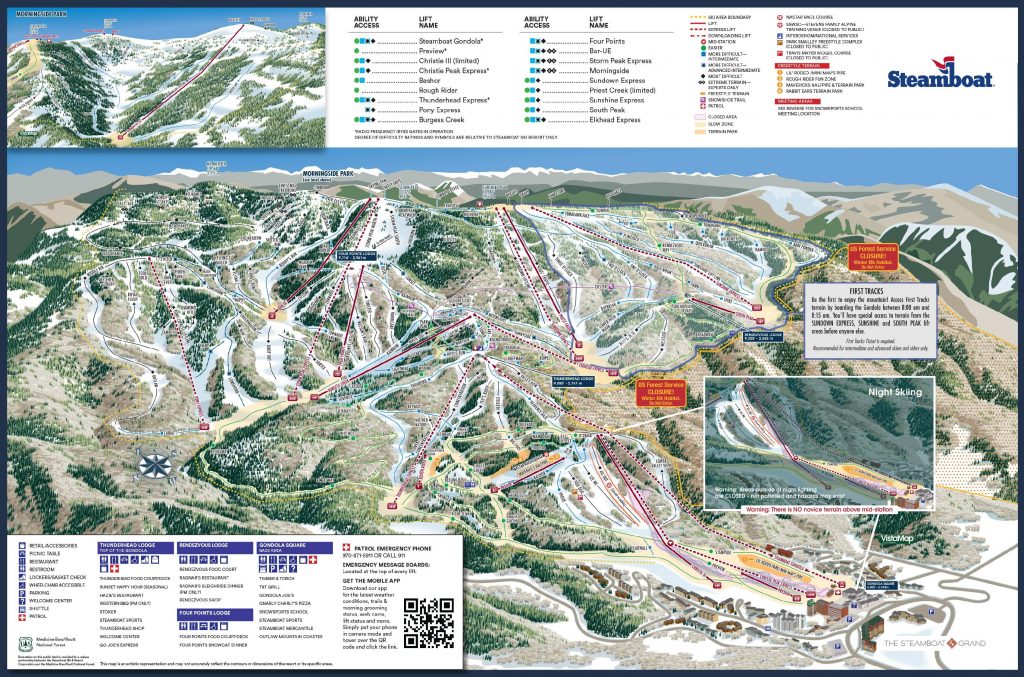 Although I’ve been to Steamboat a couple of previous times in the 80’s, AiRung had never been there so we had to go. Because the mid-season ticket prices are so high at Icon and Epic resorts (if you don’t have the right season pass), we decided to gamble on early-season snow and pre-purchased 3-day early season Steamboat Icon passes good until December 20th for about $55/day. We booked flights to Denver (ug), and rented a crappy car and we were off.

Steamboat is 177 miles from the rental car agencies at Denver International Airport, and with the normal (bad) traffic on I-70, you have to plan for about 3 1/2 hours. You have 2 passes to cross, and Rabbit Ears pass is high and exposed. There is nothing like a sudden uncontrolled slide toward a snowbank to remind you that all-season rental car tires are the worst! Luckily the weather cooperated and Steamboat was sitting at 130% of normal snowfall by the time we got there in mid December. Whew! These are the things we are always weighing and planning to make sure we do our best to ski new resorts when the snow is good without breaking the bank.

Because it was early season, we were able to get some ski-in / ski-out accommodations a few hundred yards above the base of the Gondola. This is the only base area so everyone is going to be loading the Gondola or Christy Peak 6-pack in the morning. The Gondola was new when we skied there and is was a big upgrade for getting skiers out of the base. It’s fast and gets you up to a point that’s high enough to access either side of the upper mountain.

New for the 22/23 ski season they will be moving the base of the gondola they just installed in 2019 to make room for ANOTHER gondola.  That has got to be an expensive mistake! 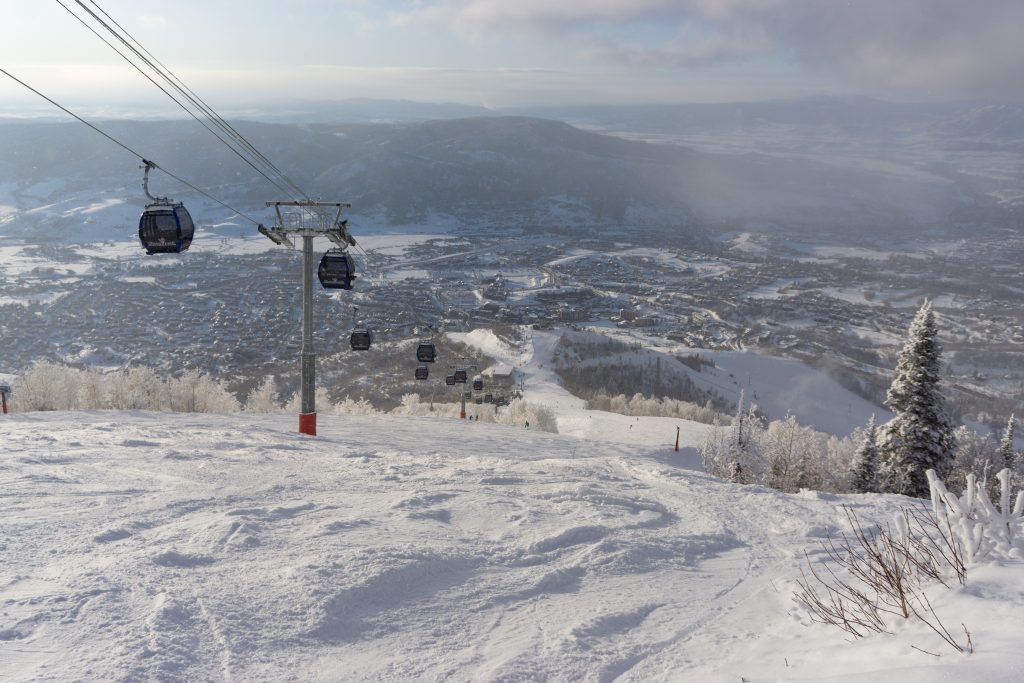 We spent most of the first day on the north side of the mountain on the Storm Peak and Four Points lifts. Storm Peak ended up being our favorite because there are many distinct runs to be had, and they are all of a consistent steeper pitch. The Pony Express lift was not open due to the lack of snow at the lower altitude there, but it would be steeper bump runs and 1 groomer on Longhorn if it was open. 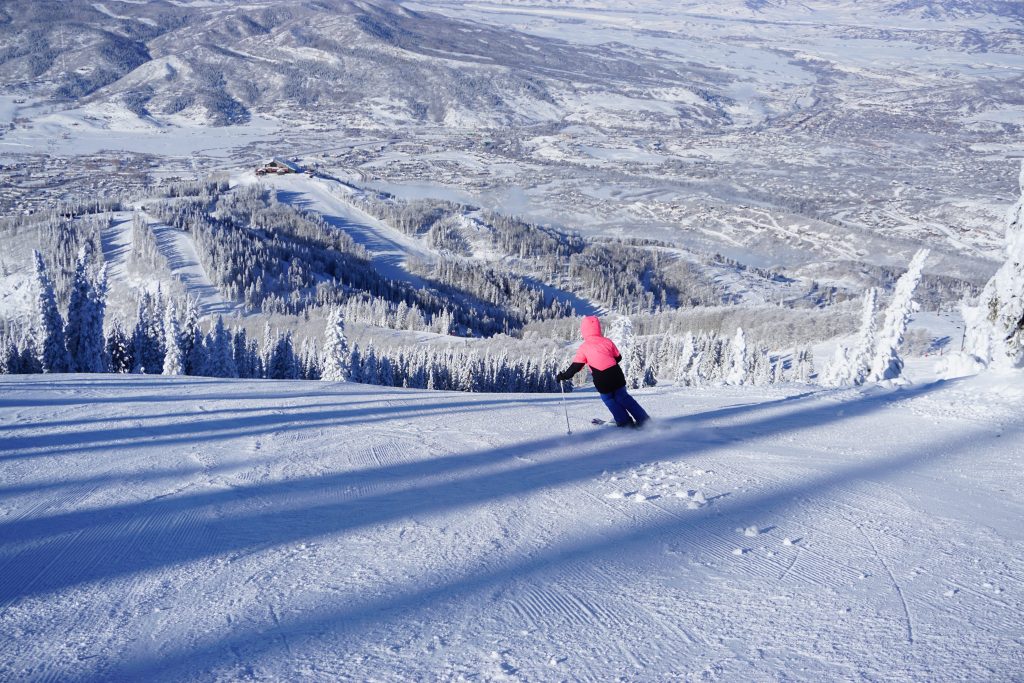 View of downtown Steamboat from the top of Storm Peak, December 2019

The steepest terrain at Steamboat is above the Pony Express lift, accessible from the only other closed lift: Morningside. The chutes there are a very small steep zone that I did ski the last time I was there. This time it was roped off because the day we arrived it slid and caught 5 skiers in an avalanche (no fatalities). We were able to ski some of the steeper terrain next to the chutes on this trip though. Buddy’s run is the signature blue groomer in this zone and is probably the best intermediate run on the mountain. 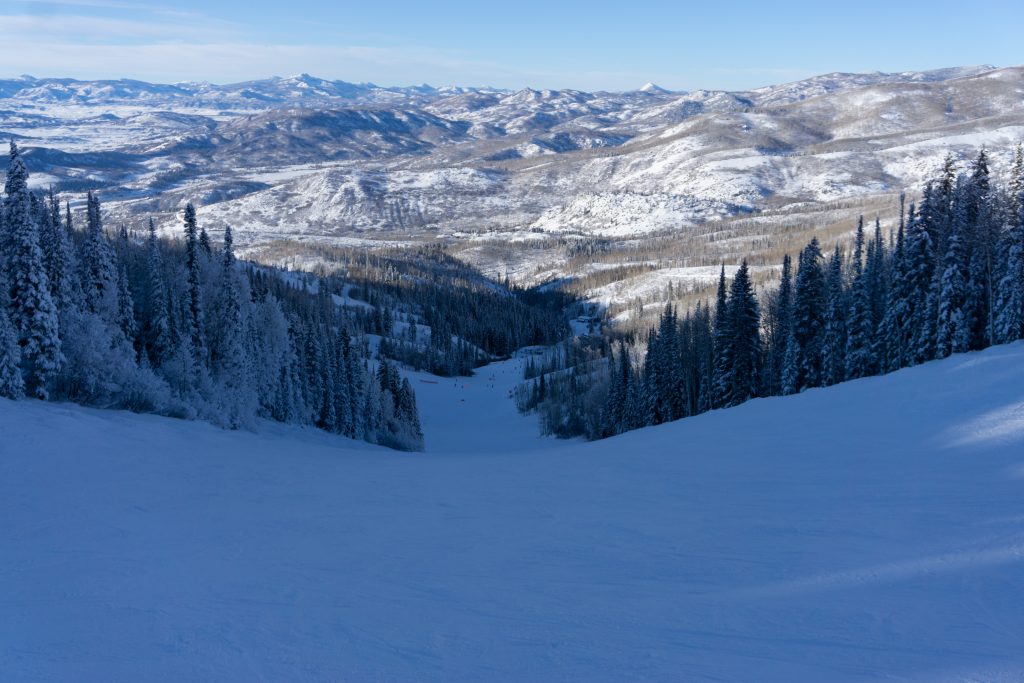 The next day we skied the other side of the mountain on the Sundown Express and Sunshine Express. Sundown has a lot more vertical and is much steeper than Sunshine, but both are very popular lifts. We found the terrain off of Sunshine to be far too flat and uninteresting, but most of the runs off Sundown are good long runs with steep sections. These 2 lifts are the most popular on the mountain. 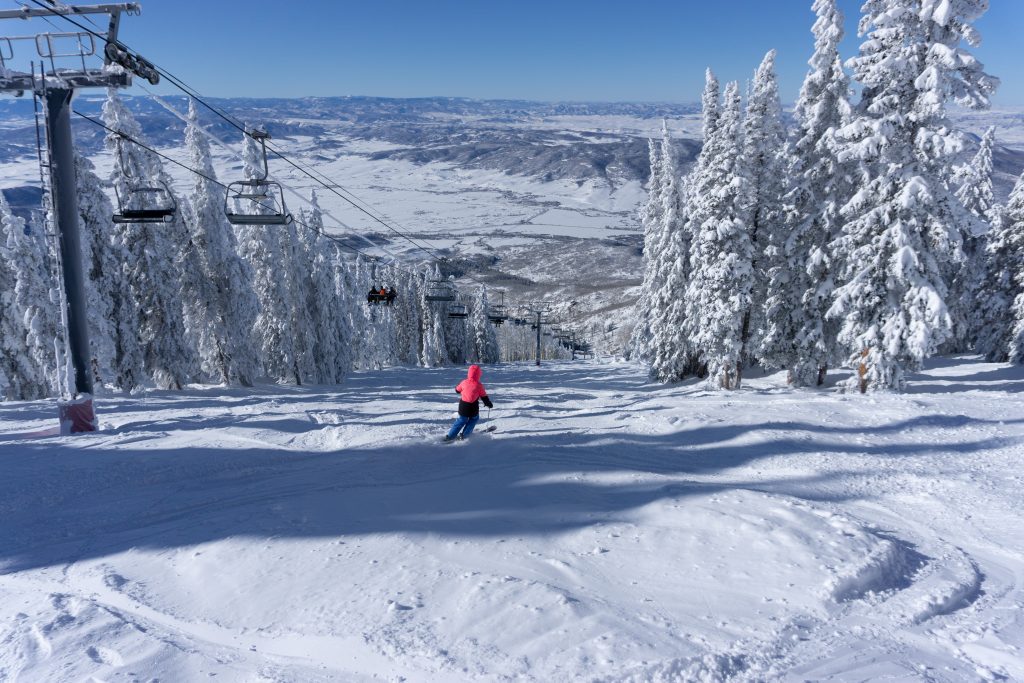 There is some good skiing on the lower mountain off of Thunderhead Express and the Gondola as well. That zone has runs like Ted’s Ridge and Valley View which are interesting steeper runs that are sometimes groomed, and bump staples like Vertigo. Blue groomers like Vagabond and Heavenly Daze are fun steeper blues, but they get a lot of traffic and are going to be icy in the afternoon unless it snowed recently. Generally, this lower mountain terrain is more icy because it’s quite low in altitude compared to other resorts in Colorado that bottom out at what would be the top of the Gondola at Steamboat. 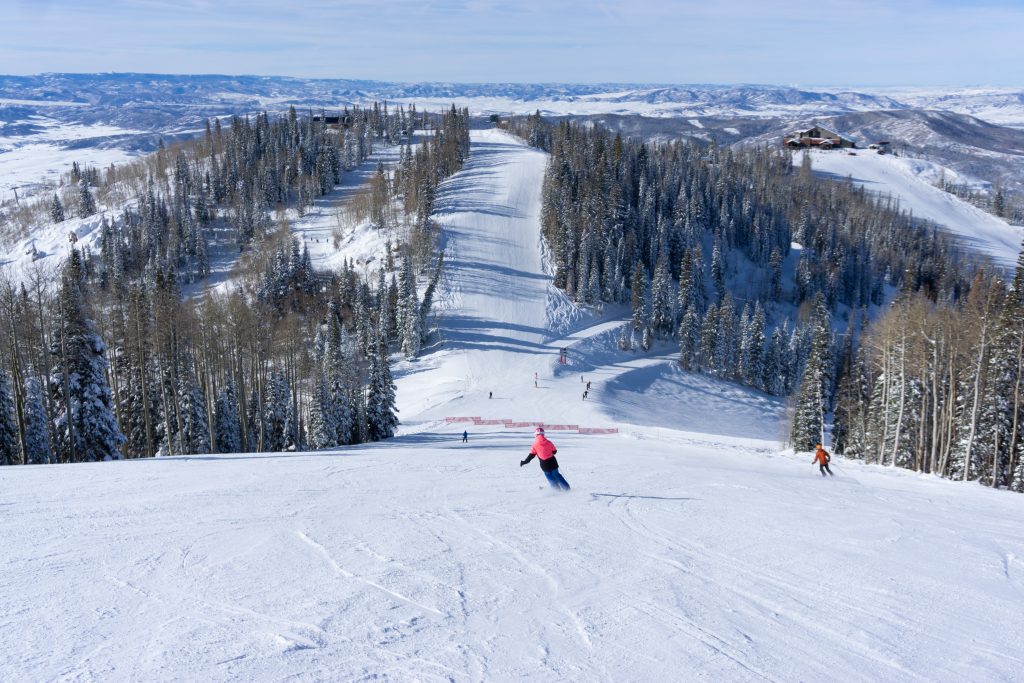 Steamboat is famous for tree skiing and it does have something somewhat unique on runs like Shadows and Bug’s Run which are gladed Aspen trees. Usually Aspens are too close together for my comfort, but at Steamboat in select zones it’s doable. At the top of Storm peak on Closets and around Big Meadow there are some conifer forests that are skiable. So the tree skiing is definitely a notch above at Steamboat, but we maintain that the best tree skiing on the planet is at Heavenly and Sierra at Tahoe, where almost every forested area between marked runs is skiable by an advanced skier. 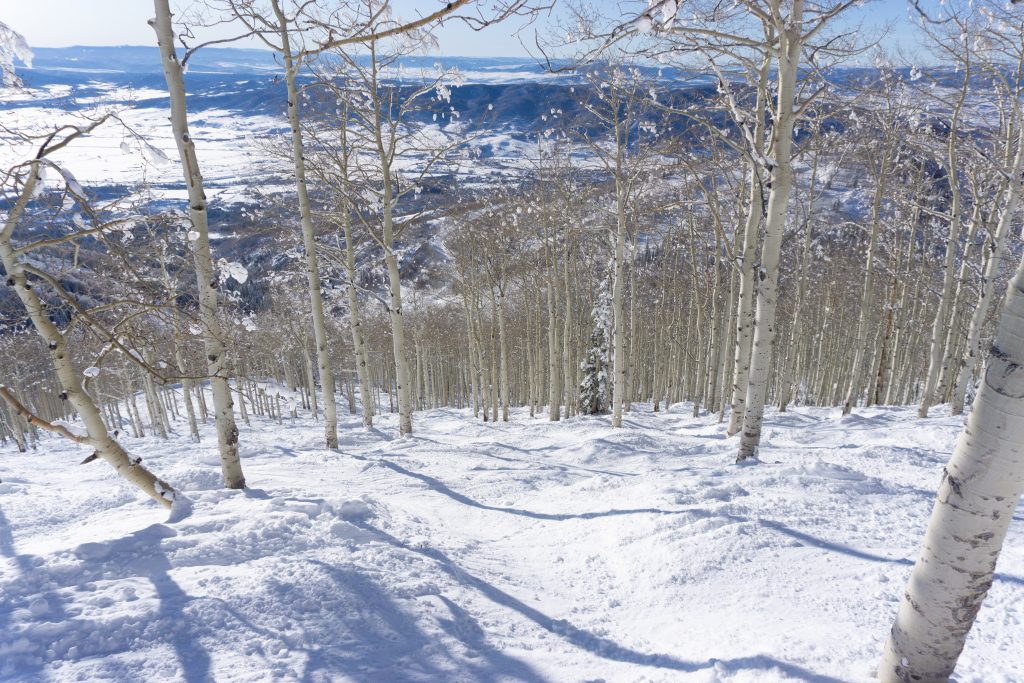 The great thing about Steamboat is that it’s easy to ski down to Gondola Square where there are lots of good eating options without necessarily being tied into resort food (and prices). The on-mountain food looked good but as usual we ate at the base every day. We liked the ribs at the Gondola Pub and Grill for something memorable. There are SO many restaurants in Steamboat you would need a few years to try all of them. Tripadvisor put’s it at 129 as of this writing. 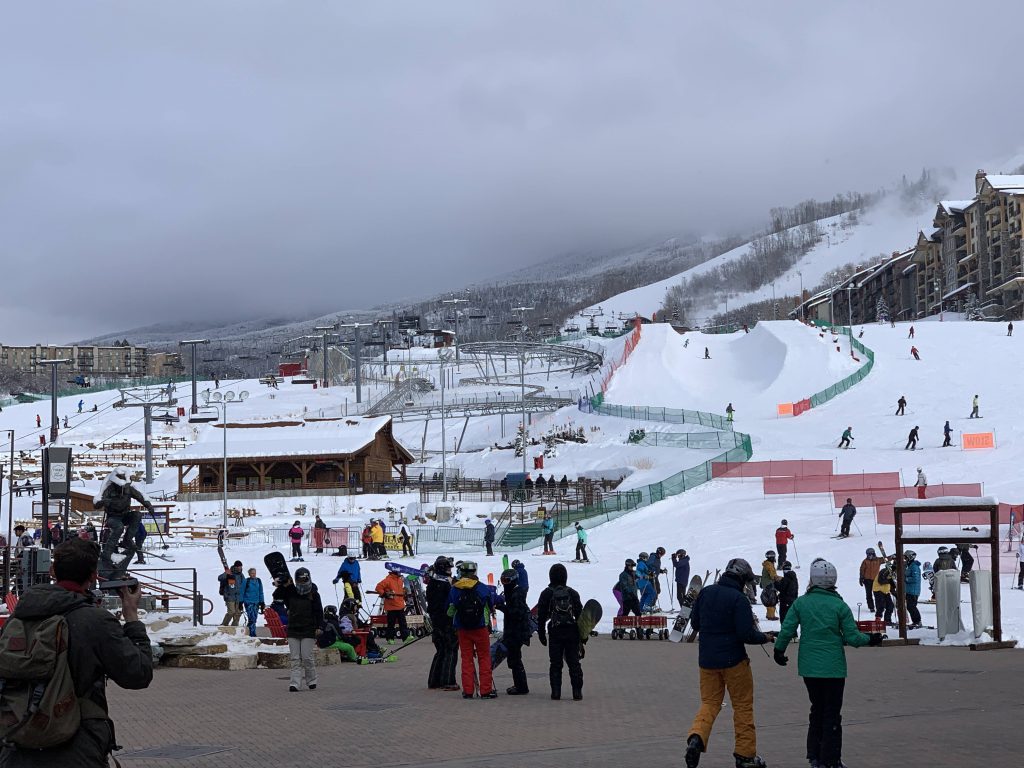 Steamboat is a big town with a lot of options. We walked around the downtown area at night and tried the Old Town Hot springs on a night when it was 0F. That is an experience that’s hard to describe going from 0F to 104F wearing only a swimsuit. Make sure your heart health is good before trying it on a cold night! 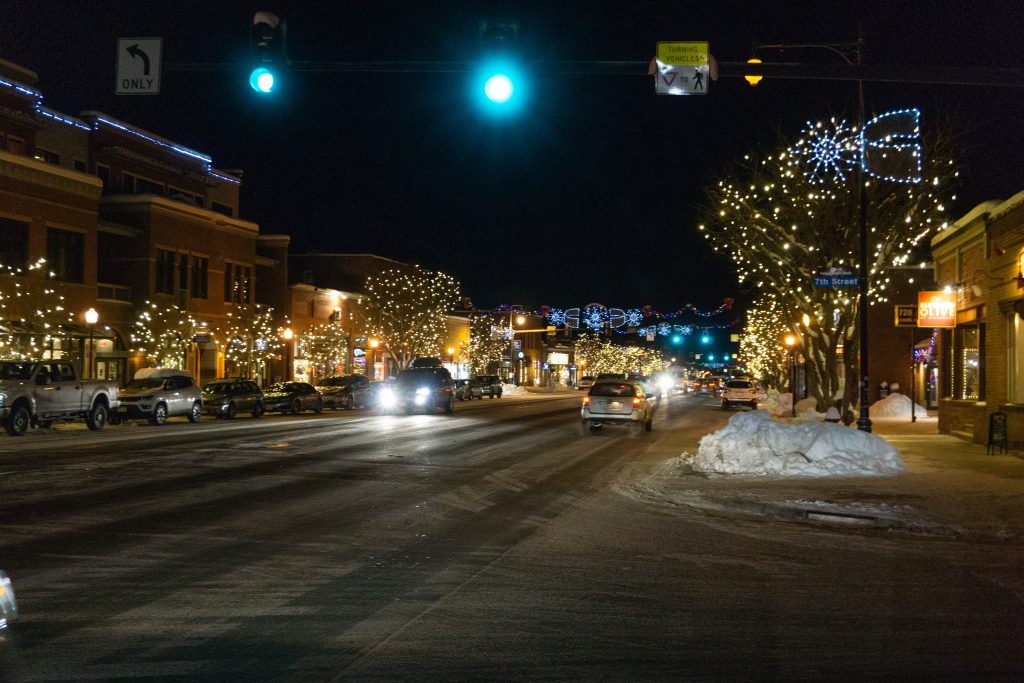 They include a lot of western themes in the Steamboat marketing message, and so you can always find western horse-drawn sleigh BBQ dinners, snowmobiling, western shops everywhere, and actual skijoring behind horses in downtown Steamboat on main street during the winter carnival in February. 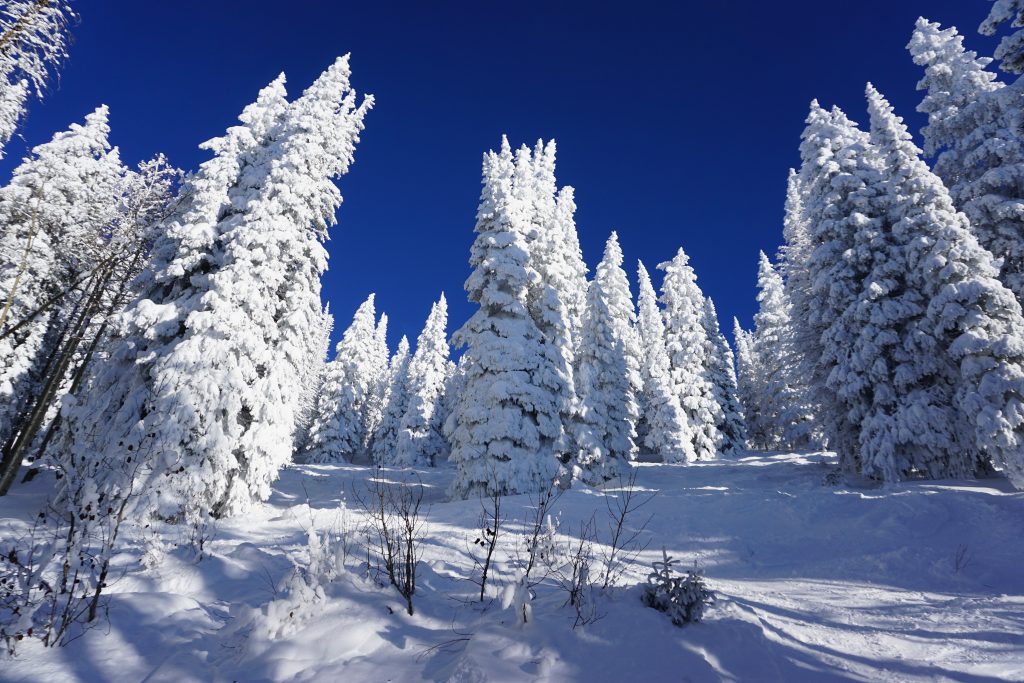 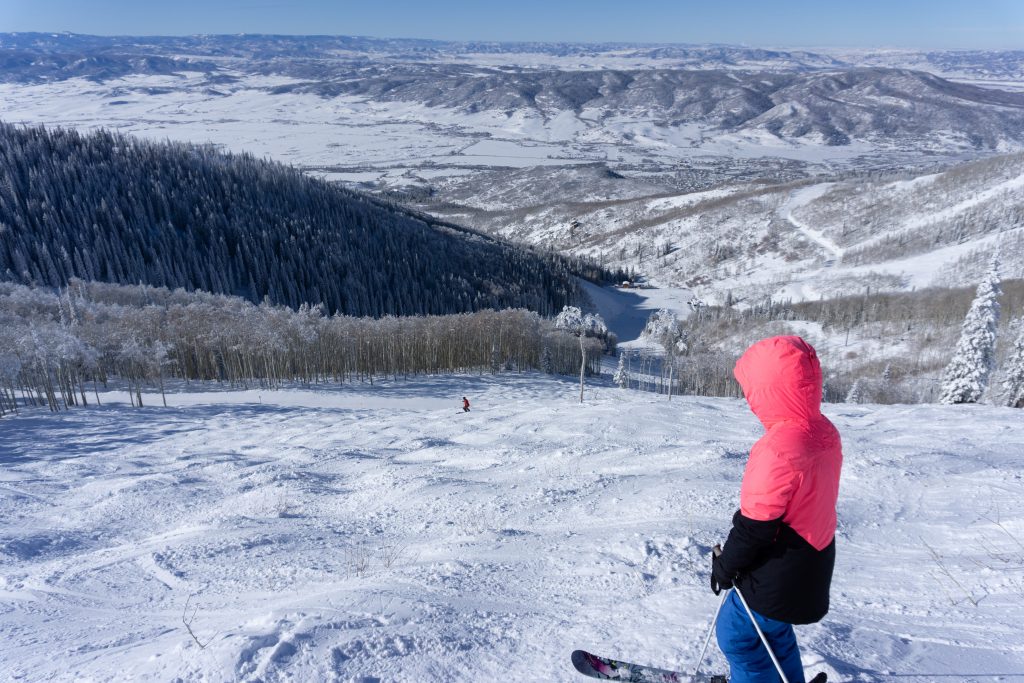 More bumps to ski on Three O’Clock at Steamboat, December 2019 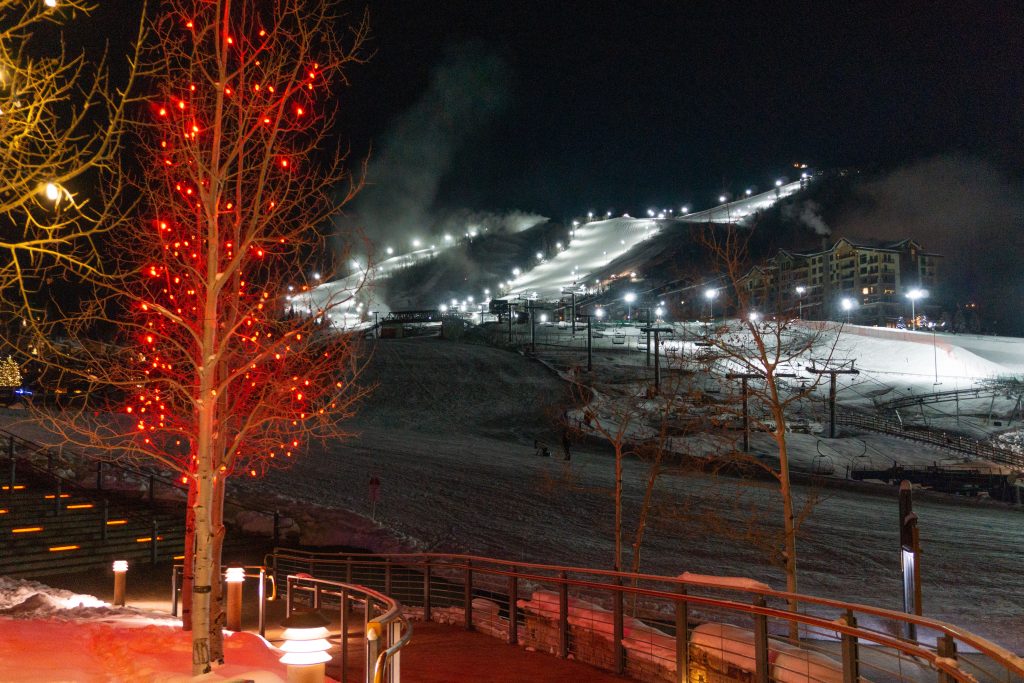 This is a major resort that many people fall in love with and go back year after year. Based on the size of the town, and having talked to many locals, Steamboat is a great place to live and lives up to the “Ski town USA” branding they are using now. There isn’t much that stands out that would make us choose Steamboat over Vail, Copper, or Breckenridge though, so we might not find ourselves inspired enough to make the extra effort it takes to go there again.

The thing that is missing is the “Wow!” factor of spectacular scenery or wide-open bowls, or steep avalanche chutes that other resorts in this class often have. Steamboat feels like more of a family resort where everyone including non-skiers will find plenty to do, and the whole mountain is pretty non-intimidating. So if that is what you are looking for head to The ‘Boat!