Grand Targhee is one of 3 ski areas near Jackson, WY. People often hit Targhee for one day on their trips to ski Jackson Hole. It is known mostly as a less-steep area than Jackson Hole and for the great consisten snow.  This review is based on 2 visits under really good conditions both times. 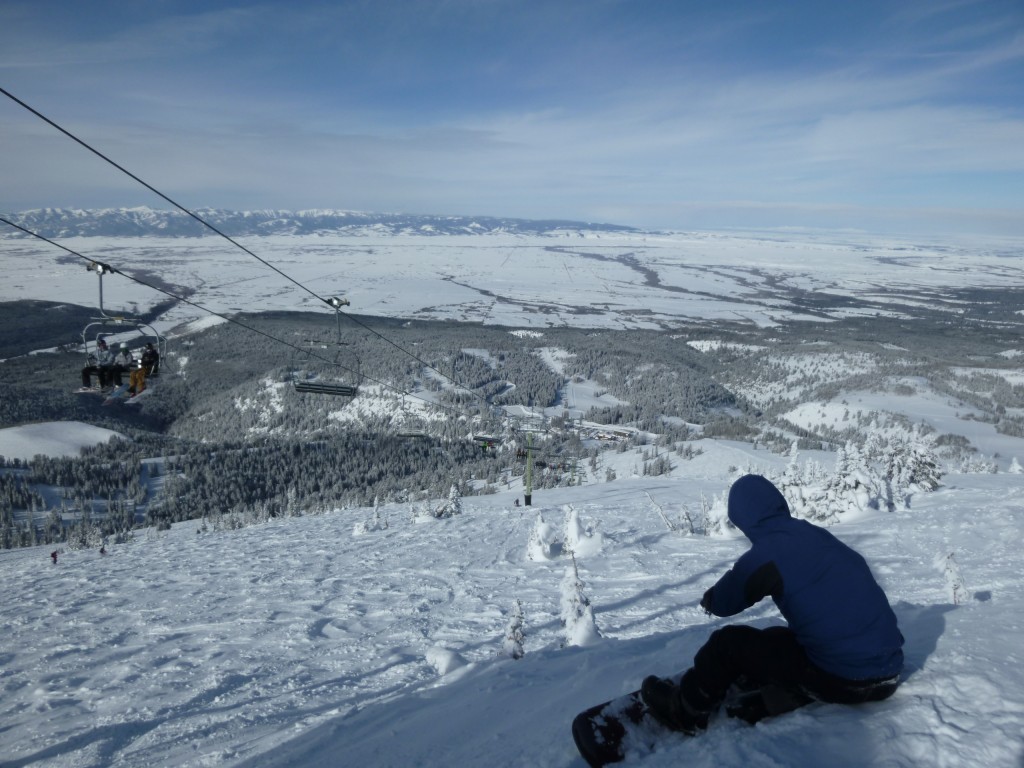 Views into Idaho from the top of Grand Targhee, March 2011

We had been hearing about Grand Targhee for years. So when we finally made it to Jackson Hole, we took a day to ski Targhee. This is a classic type of ski resort with only about 2,000 ft of vertical aligned along a single ridge. It has 3 major ski pods on 2 peaks. Each run will be top-bottom. And the vertical is decent on the 2 high speed quads. That allows you to rack up a lot of vertical in a day. 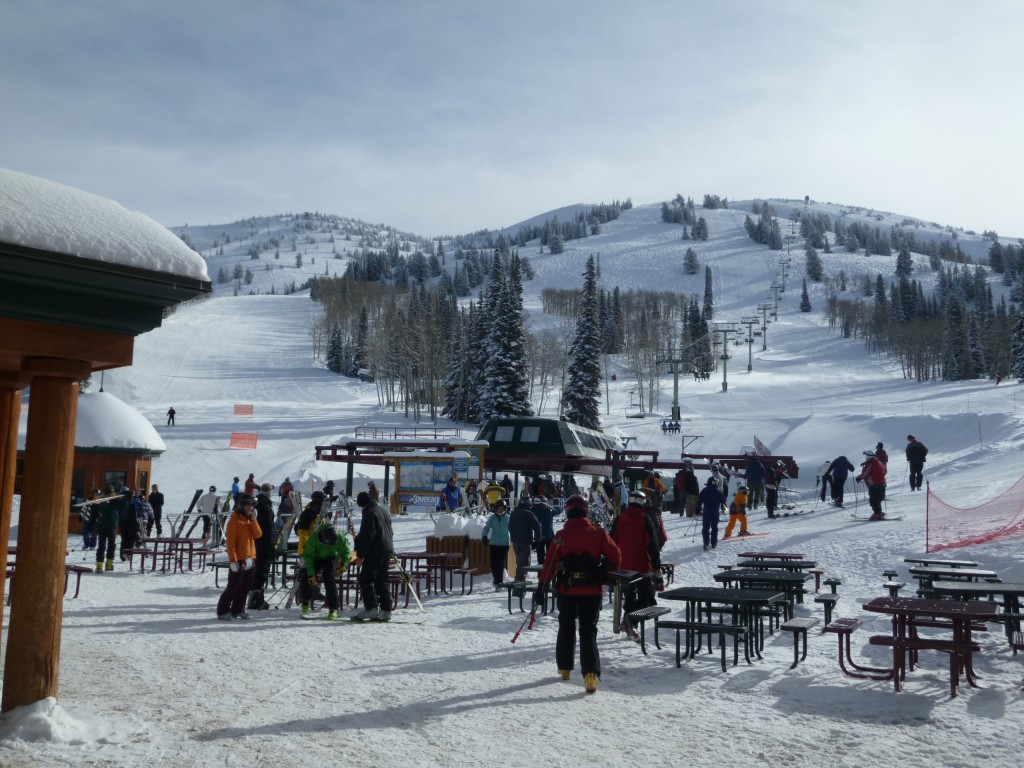 There is actually a LOT of acreage to keep you entertained. With 2,600 acres, it is bigger than Jackson Hole. I’m not entirely sure if that 2,600 includes the snowcat-only terrain though, because it doesn’t really feel like it is that large when you are skiing it. There are few trees on the Fred’s Mountain terrain, so most of the acreage is ungroomed.

The crowd, or lack there of

Oddly, the ski area does not get lots of traffic, and it is almost always possible to find untouched powder off the groomed terrain. On a powder day it is one of the few areas on our list that you will be skiing powder all day, instead of just a couple of runs first thing in the morning. Thankfully, there are lots of powder days and frequent snowfalls. Because the area only has 5% of the terrain covered with snowmaking, which is one of the least amounts of snowmaking for any of the resorts on our list. The snowfall is so consistent there that they don’t really need it, which is a very rare feature.

Starting on the left, the Blackfoot chair skis larger than the trail map suggests. This area gets less traffic and is my favorite spot in the afternoon because the groomers can still be fresh. It’s also slightly less foggy up top than Dreamcatcher on one of the frequent foggy days.  The ancient double chair was replaced with a new quad in 2016 after our visit. 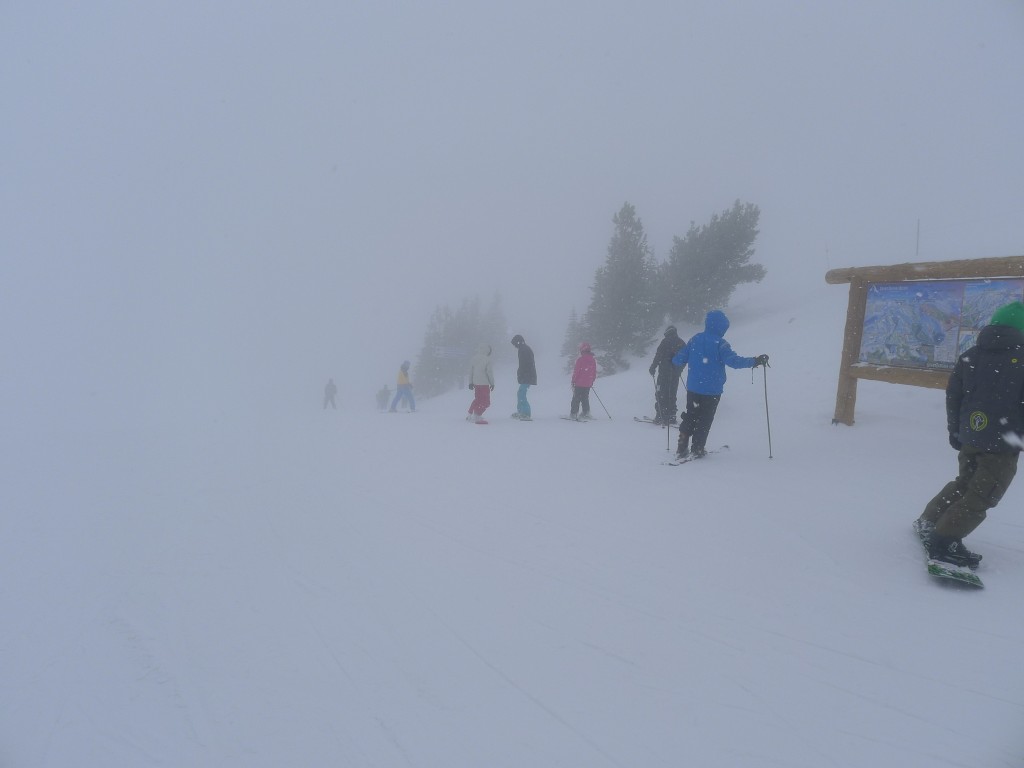 Fog at the top of Dreamcatcher, December 2013

Dreamcatcher is the main lift and it’s a great one with 2,000 ft of vertical. Lots of groomed intermediate and advanced trails. The lift also provide access to hike-only terrain to skiers left. The hike to the top of “Mary’s Nipple” is short with a nice payoff of about 1,000 vertical of powder skiing. 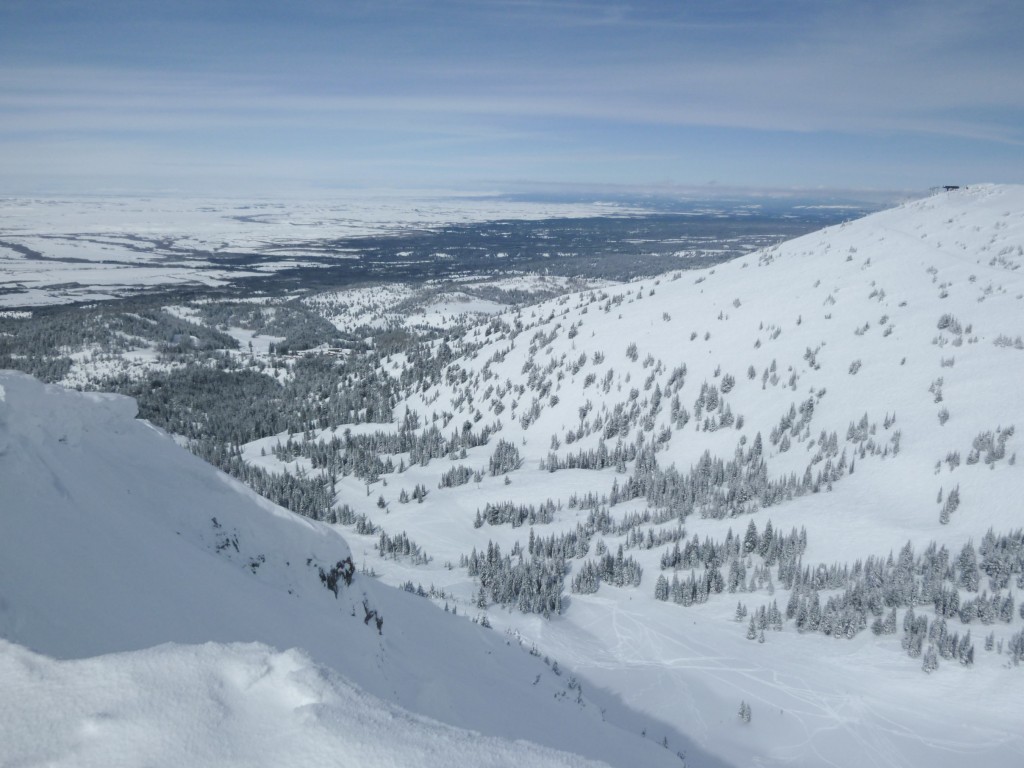 From the top of Peaked Mountain, Grand Targhee, March 2011

The Sacajawea lift is more typical of most Western resorts, with some mostly heavily wooded terrain and runs cut through the trees. The only problem with this lift is that Dreamweaver is the only way to get back to the Dreamcatcher side. And it’s a narrow blue on a ridge top that get pretty scraped up and rocky. The rest of the terrain is great with some varied winding runs.

I’ve hiked all the way over to the top of Peaked Mountain, which is above the top of the Sacajawea lift and was also the top of the snowcat skiing operation until 2021. They have signs up there that you are not supposed to ski down the Sacajawea side unless you’ve paid for snowcat privileges. The open double-blacks right down from the peak are steep and scary. These also face due north and have fantastic snow conditions. This is the steepest terrain on the mountain. The lower chutes on this steep ridge are accessible from the Sacajawea lift.

In summer 2021 construction began on a new lift that goes to the top of Peaked mountain.  This will be complete in 2022 which means no more snowcat skiing there.  But having lift-served access will really expand the skiable terrain.  More lifts are planned in the master plan for the future, but it remains to be seen if this actually happens.  There has been a lot of local opposition and also concerns about bighorn sheep habitat being impacted. 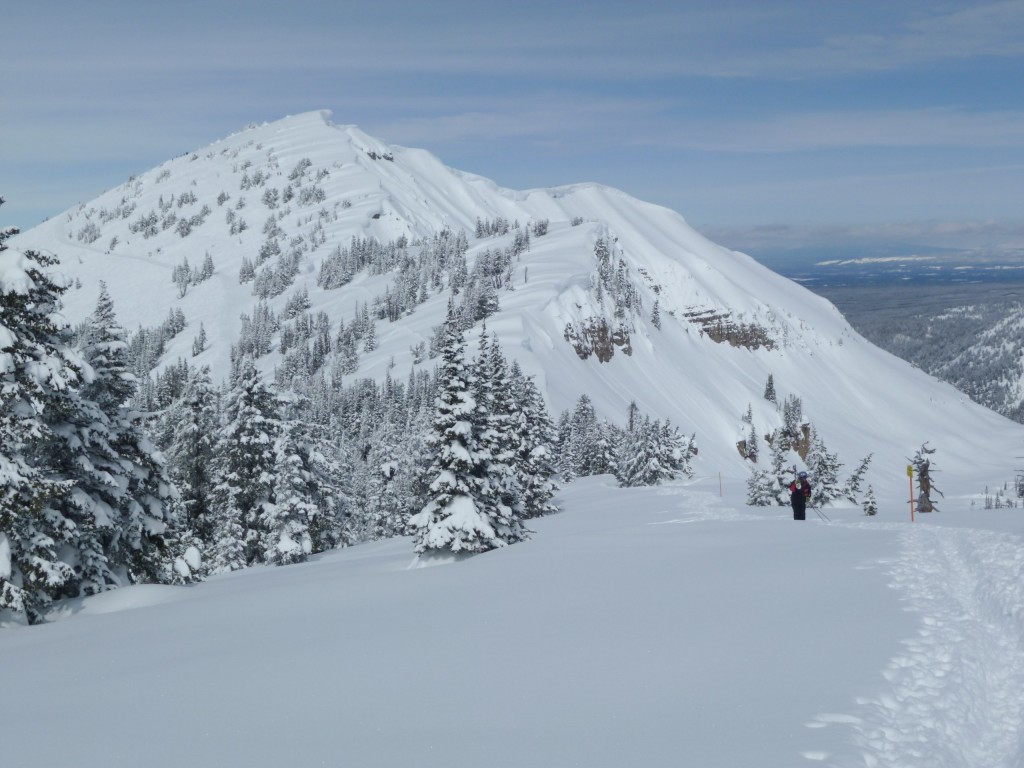 Food is pretty limited and average. This is not something I look forward to when skiing there. We’ve eaten at the main Cafeteria and the smaller Trap Bar which is more of a locals hangout. There is also a deli that I haven’t tried. You are not at Targhee for the food though, so grab a quick bite and get back out there in the powder.

The vibe at Targhee is very friendly and way less competitive than at Jackson Hole. We’ve had some great chairlift conversations and had a great time skiing with a couple of the old timers that were giving tours. There are lots of local families there with race programs and a dedicated beginner chair and “Kid Fun Zone” that will keep the kids entertained.

Targhee had a snowcat operation as mentioned above. Friends of ours spent a day doing that and said it was a lot of fun and fairly inexpensive, although the terrain is a little flat for powder skiing. This will be replace with lift-served skiing which should be interesting once complete. 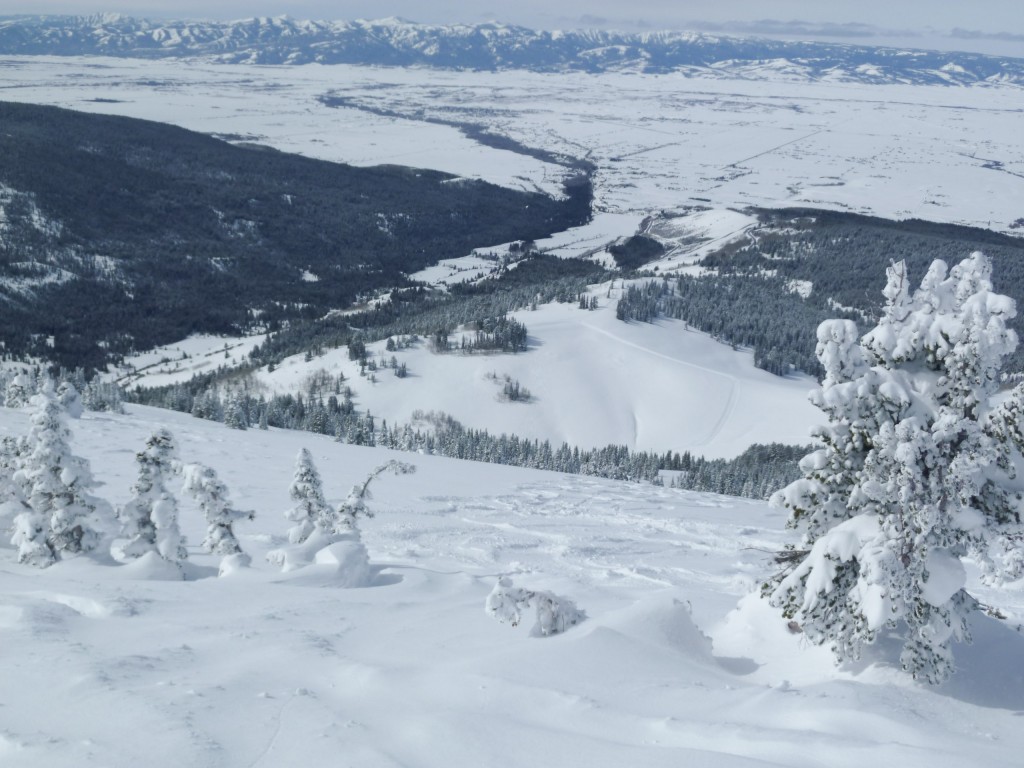 Looking down the snowcat terrain from the top, Grand Targhee, March 2011 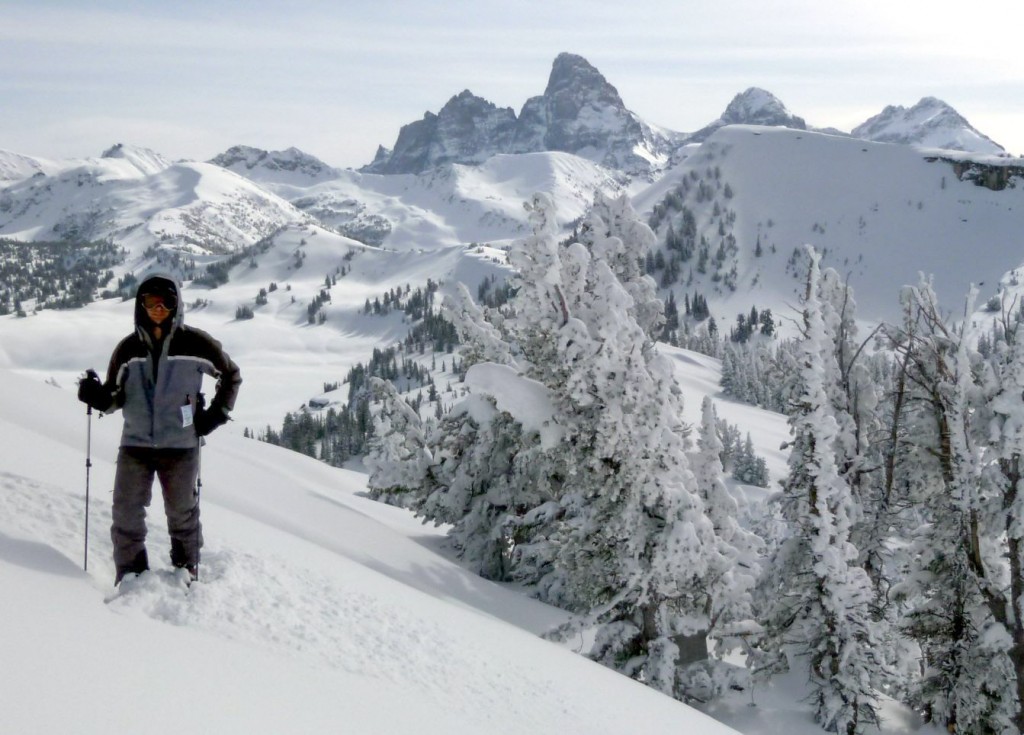 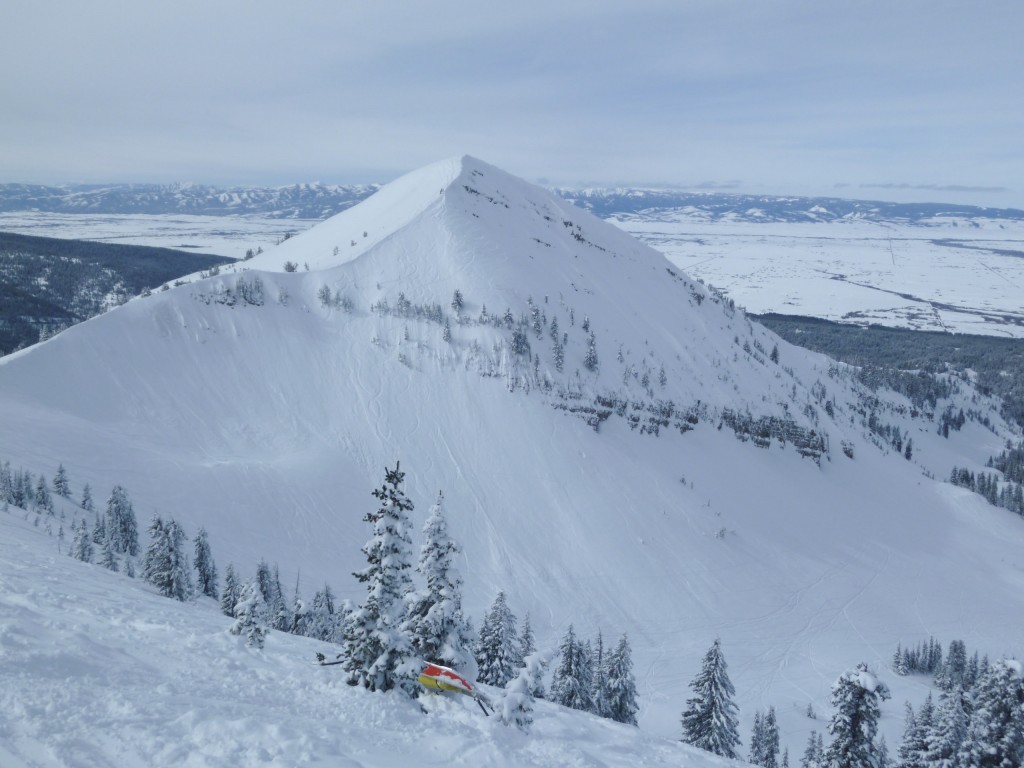 Targhee is powder paradise with some of the most consistent snowfall in North America.  We are definitely planning to go back. With the consistent deep snow I’m sure we will end up there someday soon when snow is hard to find at most other western ski resorts. 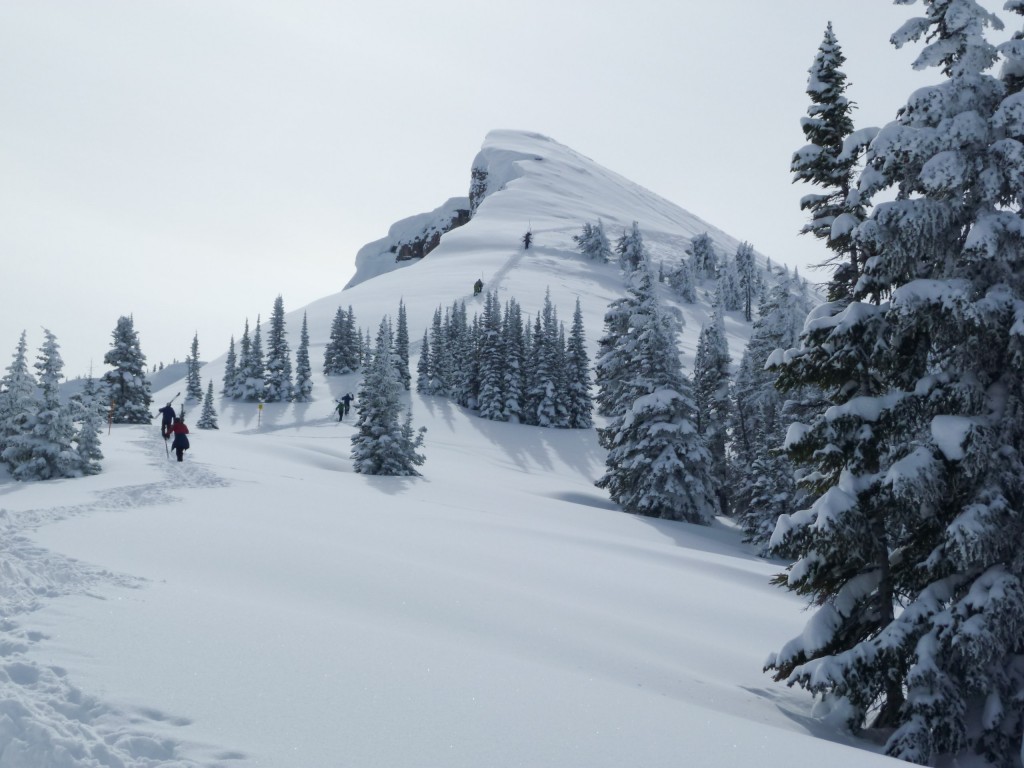