Homewood ski resort is on the west shore of Lake Tahoe. This is the only resort in Tahoe where the runs end up close to the lakeshore at 6,230 ft.  This review is based on about 5 visits in many different conditions over a 10-year period.

Since we visited last, Homewood upgraded a bit with a high speed quad replacing their most popular lift “The Quad” which has now become “Old Homewood Express”.  They have plans to replace the main chair out of the base “Madden” with a new gondola next year.  Homewood is entirely on private properly and they intend to develop home sites on the mountain so the gondola supports that goal.

Unfortunately, Homewood is switching to a private resort model in the next couple of years and unless you are a homeowner in the area you will not be able to ski there.  They intend to only sell season passes to a collection of Homeowner associations in the Homewood area, as well as their own newly developed properties.  Thus, Homewood will drop off the Top 100 list.  We were never able to get back there to take photos unfortunately, but I will keep this old review up on the site. 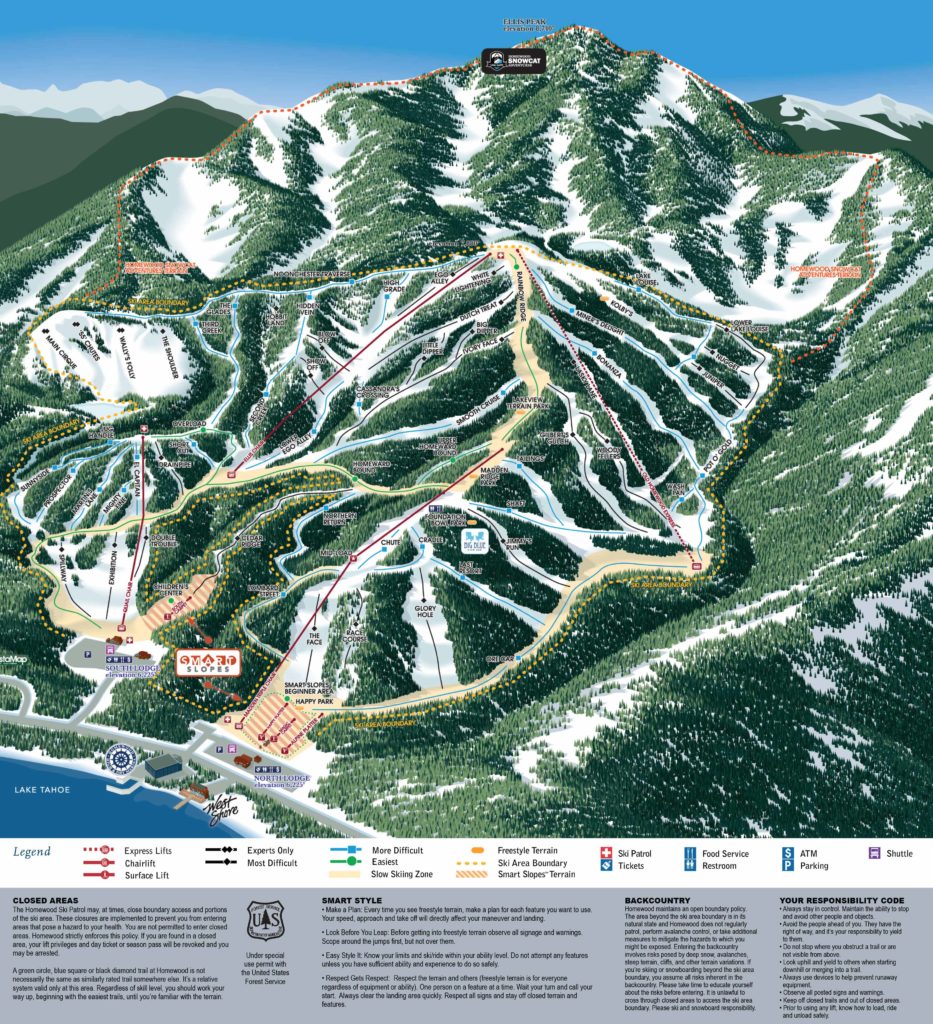 Homewood is a very unique place with some compelling qualities that make it rank higher that it would normally rank on paper. The main extraordinary quality is the stunning view of Lake Tahoe from many of the runs. It’s hard to take your eyes off the lake as you make your way down the ridge. The other one is that the low elevation is great on a storm day to stay out of the wind. On days when Heavenly is shut down due to wind, Homewood will probably be 100% open.

We started skiing there with the kids in 2001 because of the 2 for 1 lift ticket deals and discounts for kids that they offer. The drive is a bit farther from the Bay Area though, because it is about mid-way up the lake on the west shore, so it’s a long-ish drive once you get off I-80 in Truckee, and you have to drive past Squaw and Alpine to get there. Later, we skied there with my parents who really liked it.

The area has some nice groomers and black runs, but the runs are fairly short because the area is set up on a ridge and the lifts are shorter affairs falling off of that on either side. There are two triple chairs that access the summit that are the most popular. Both provide access to the best terrain at the top of the mountain. There are 2 other major lifts that access the two distinct base areas (these used to be 2 different ski areas), but that terrain is not as usable due to snow conditions and terrain shape.

Homewood is a fun / mellow / uncrowded place with great views that is worth doing when the snow is good and it’s cold.  The low elevation is a blessing on a storm day and a curse when it’s raining, so pick your days carefully and when the conditions are good it’s a fun place for a day of chill skiing.