After spending a few days in Ogden on the Wasatch Front, the long-ish drive through Logan and up the windy Logan Canyon is a shocker. Temps in the high 20’s in Logan dropped to -2F as we approached the turnoff to Beaver Mountain. It’s a whole different world up there away from the traffic and industrial landscapes down below. We didn’t know what to expect because there is almost no chatter about this place outside of northern Utah. Turns out we were in for a treat! 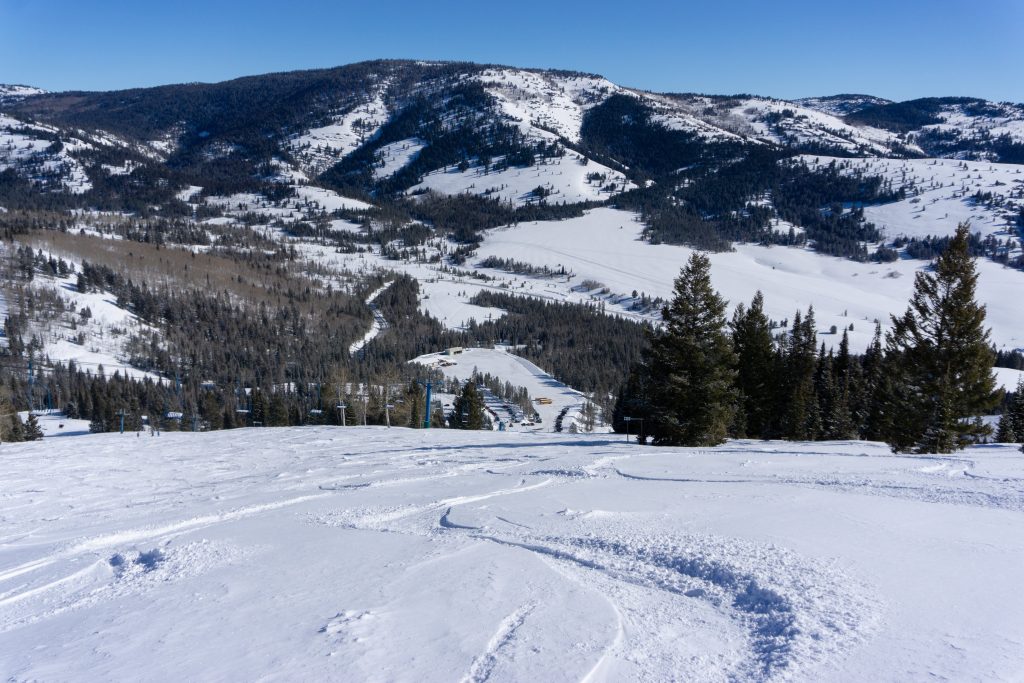 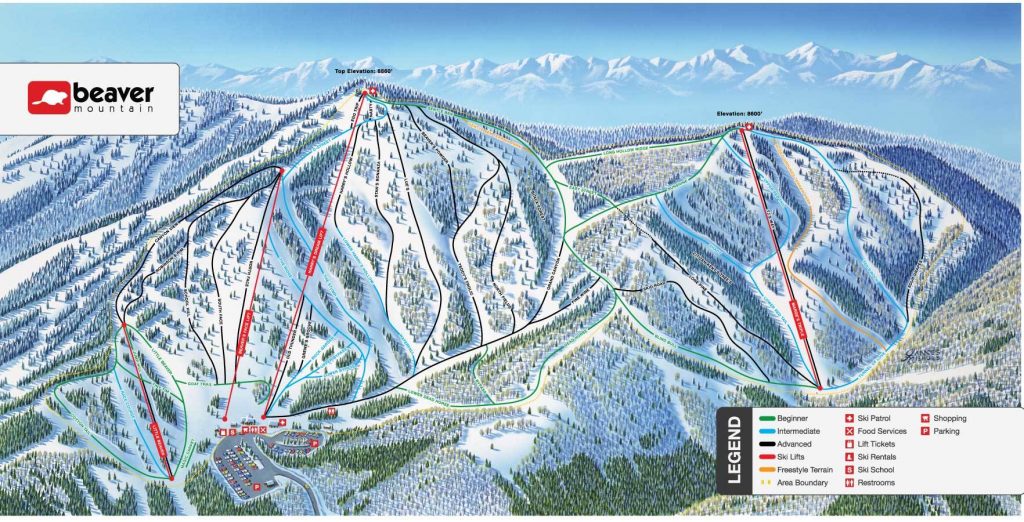 The northernmost trail at Beaver Mountain is only 1.1 miles from the Idaho border, so this place experiences a different weather pattern than the Wasatch Front resorts far to the south. This was evident on our day there after skiing Snowbasin the day before. At Snowbasin we could only ski groomers and wind-affected chalky snow off-piste in the shade where a freeze-thaw-freeze cycle had made everything else unbearable. At Beaver, the whole mountain was in-play with 5″ of fresh snow in the previous 2 days that had barely been touched in places. This was one of the top 2 days of the season outside of our home Tahoe resorts.  We never waited in a lift line.

On paper, Beaver isn’t a home-run with only 828 acres and 2 main lifts that are slow, but the reality is that almost everything is skiable. See those trees over there? Yes, you can ski those. This place has great tree skiing, and it’s basically everywhere. These are tighter trees than at Heavenly or Sierra at Tahoe, but they are much more accessible than most resorts in the Rocky Mountain states. 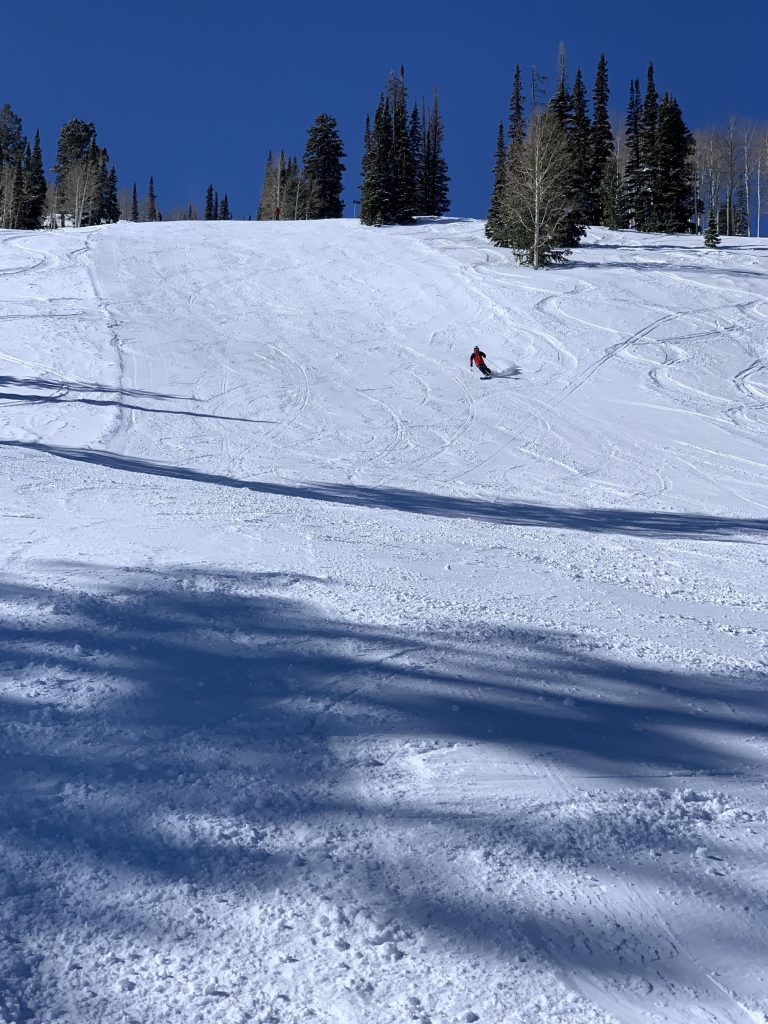 Powder between the groomed runs at Beaver Mountain, February 2020

Beaver Mountain will stroke your ego a bit with their trail ratings. Some of the advanced trail ratings could easily be intermediates at other resorts. In reality, most of the mountain is intermediate level. It gets so little traffic that only small bumps form. The frequent Beaver Mountain skier will be after trees and soft snow rather than challenge. There are no double-black runs. Heck, there aren’t really even any short, steep drop offs anywhere that we found. You can safely explore this place with your less-accomplished companions without fear of getting them into trouble. 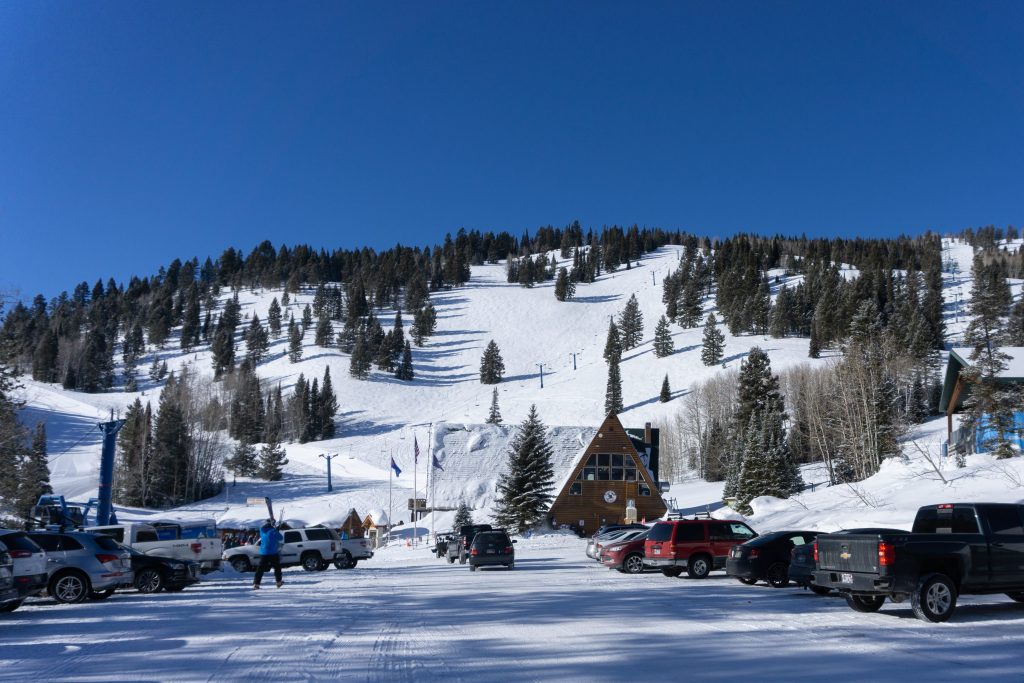 View of Beaver Mountain from the parking lot, February 2020

This is the best lift on the mountain with 1600′ vertical and a large variety of runs. They did a good job grooming the ones that should have been groomed and not grooming the ones that should have been left alone. We skied just about all of them. Lue’s was our favorite with a little more pitch and wonderful soft snow. We ended up skiing in the trees along most of the trails though, so it’s basically one huge skiable mountain. 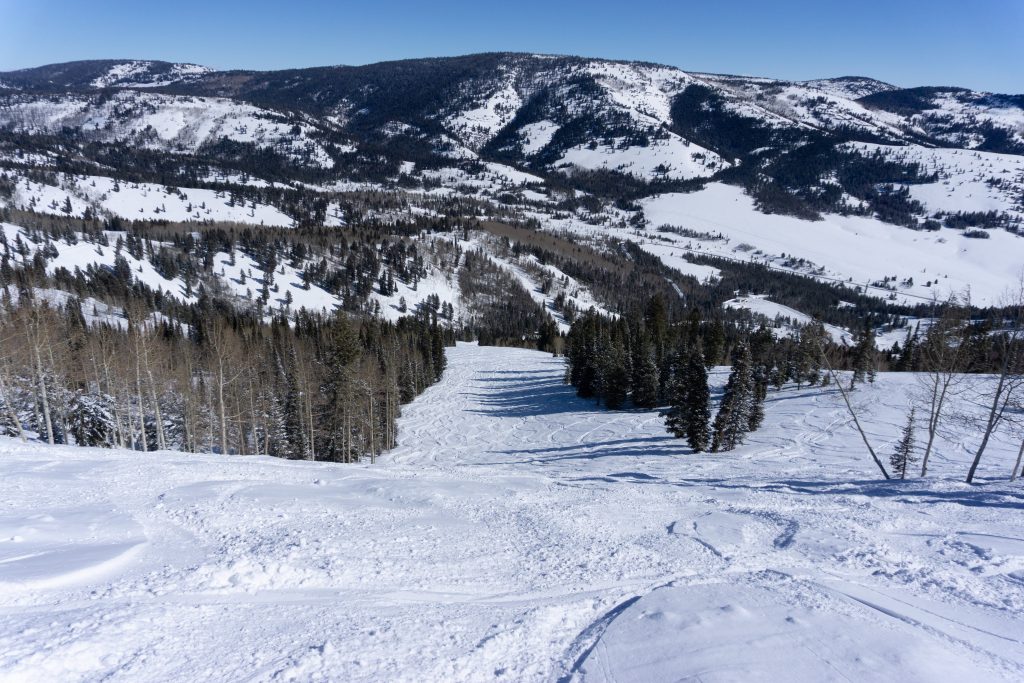 This one is fun too, but without as much vertical it’s not really the main course. The runs have more twists and turns though, which makes it more interesting. There is a lot of hardly touched powder north of the Ted’s Rock run.  The lift’s namesake Marge was the person who sold us our (very cheap) lift tickets in the morning! 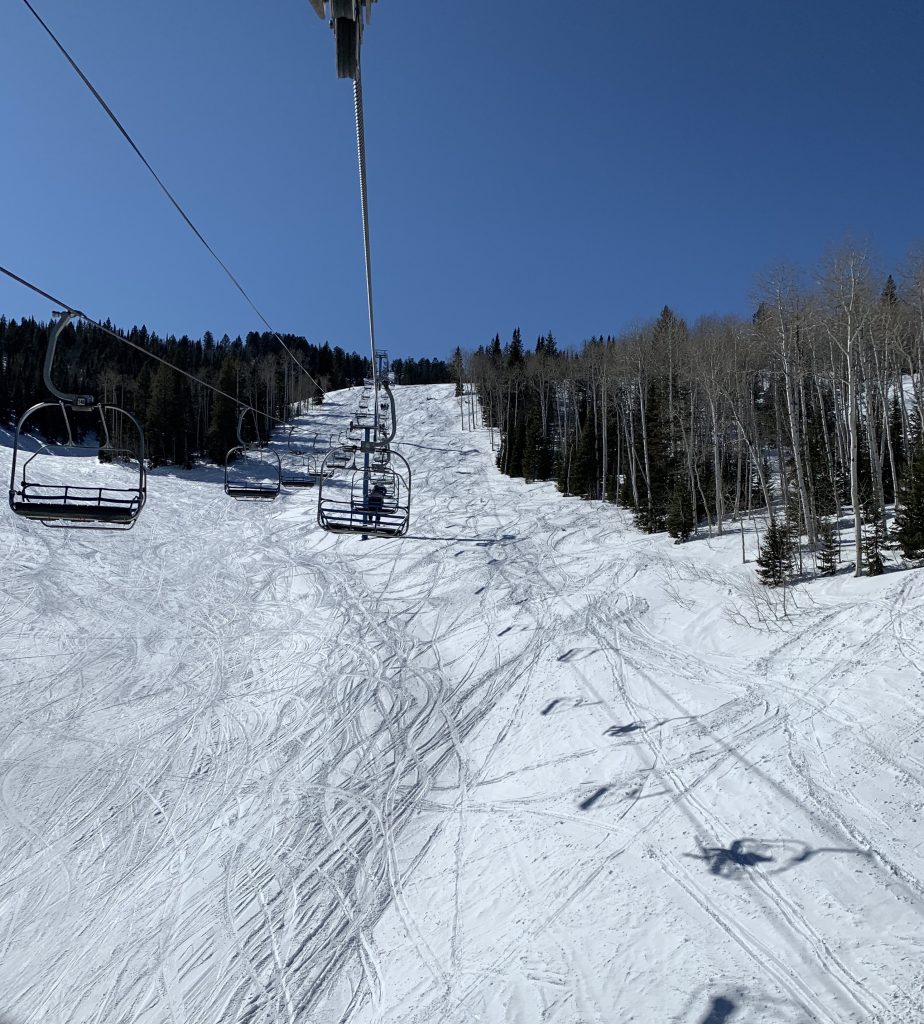 Beaver is a bare-bones operation without any snowmaking, old fixed-grip lifts, and an ancient base lodge to go along with that. This is where I usually say that the food was average, but not this time! The Street Taco stand was fantastic. The 2 large tacos for $10 that we got were some of the best ever. Nobody would have predicted that! The day we were there was obviously a school field trip day, and it was full of kids, but it was refreshing seeing a bunch of kids together NOT on their cell phones (there is no cell service at the base). Beaver Mountain is perfect for families with kids because the kids aren’t going to get into trouble and can be left to roam free. 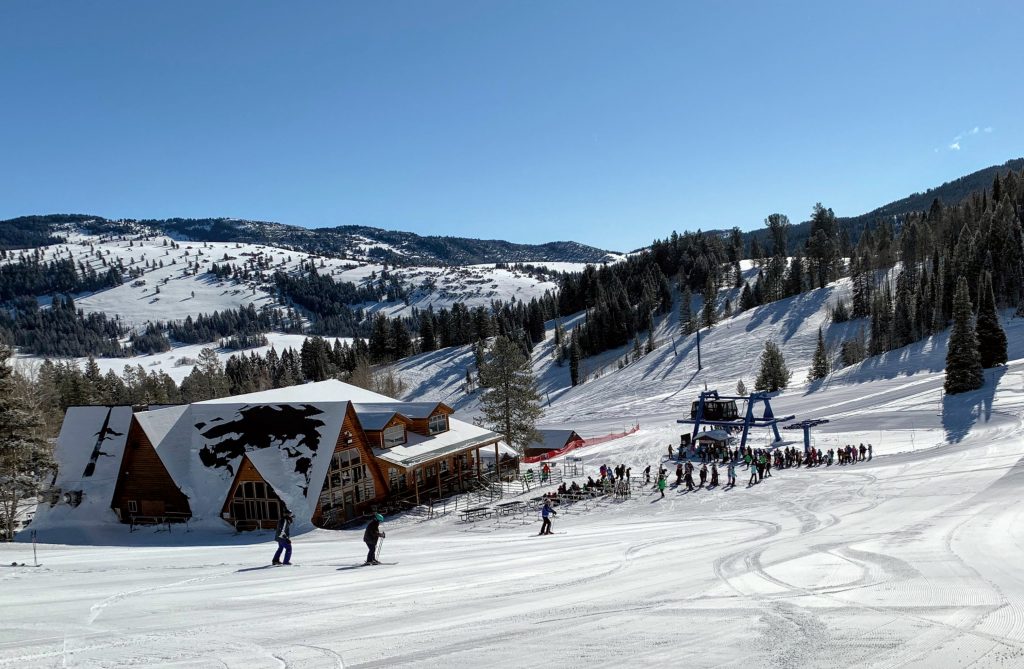 Tidy base area at Beaver Mountain, February 2020.  That’s a group of kids on a field trip lined up – not a lift line 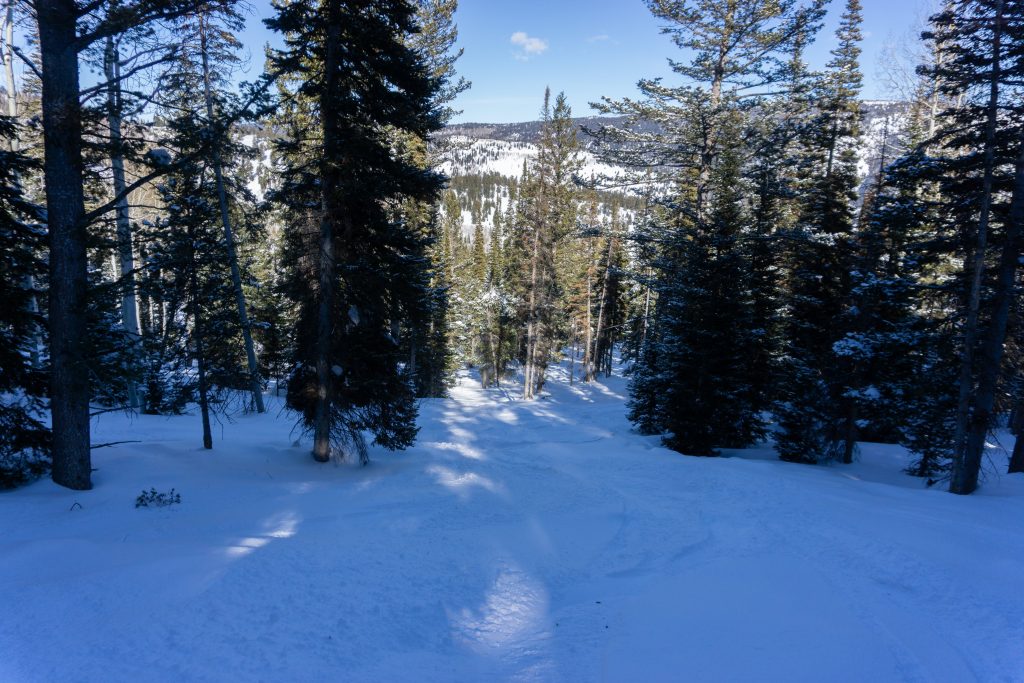 Trees off of Marge’s Triple at Beaver Mountain, February 2020 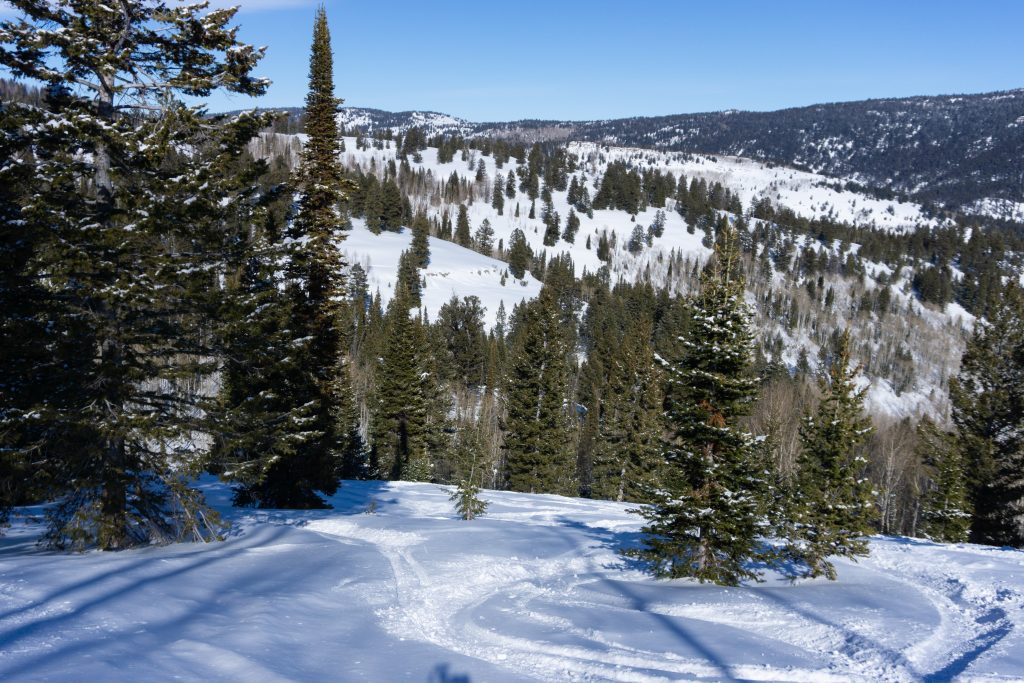 Beaver Mountain was another score for the skinorthamerica100 project. We never would have discovered this place otherwise. Right after AiRung posted her review on Facebook we got comments from locals calling it “Utah’s best kept secret”. We agree, and just might make another trip over there from Tahoe some day to experience some more of that uncrowded, enjoyable skiing. 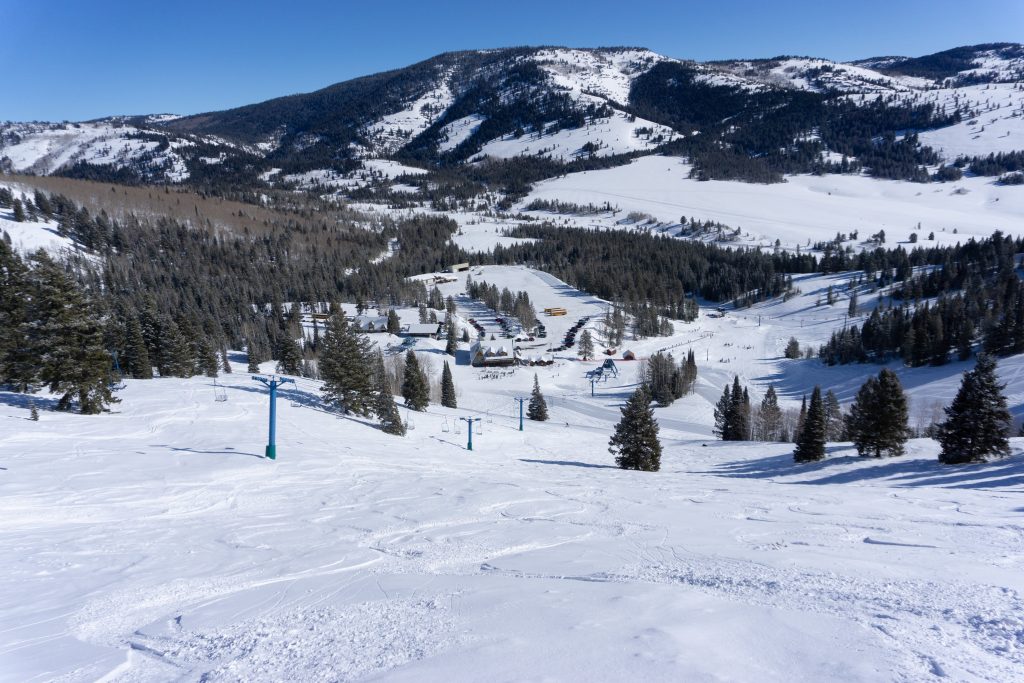 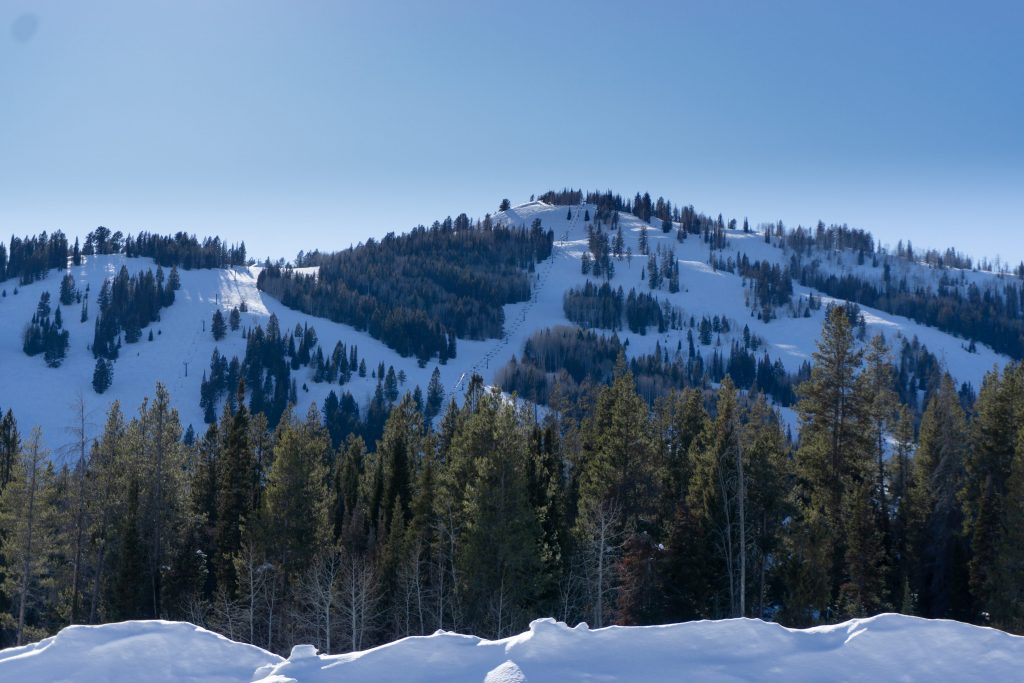