Whitefish is a relatively new major player in Montana skiing, second only to Big Sky as a destination resort.  The town of Whitefish is attractive to tourists. Being close to Glacier National Park and having a major ski resort close by make Whitefish a year-round attraction.  This review is based on one visit of 2 days during good mid-season conditions. 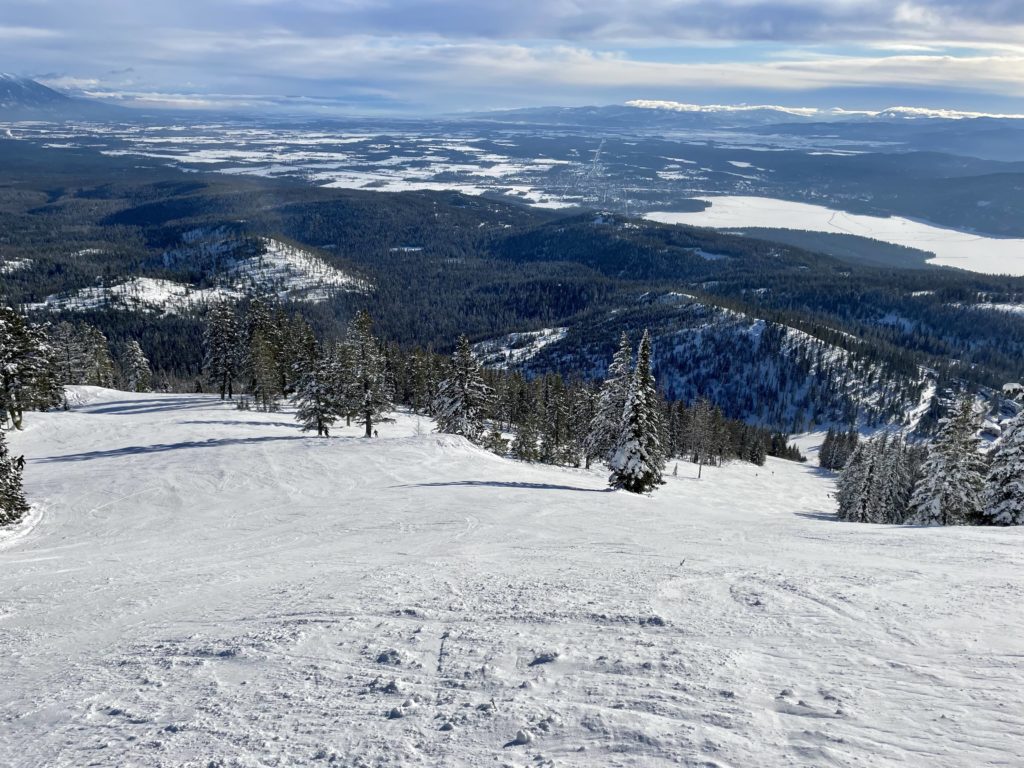 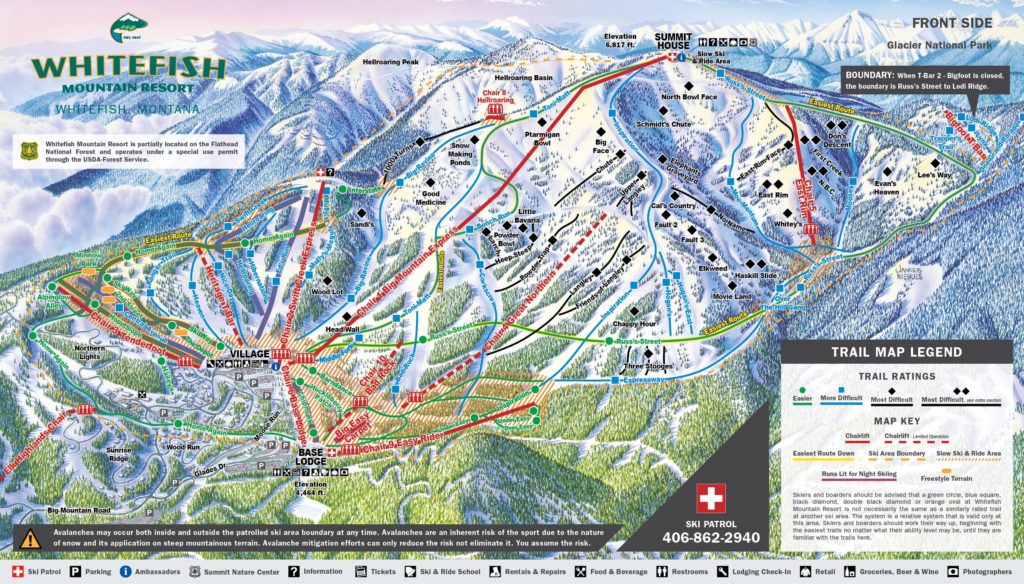 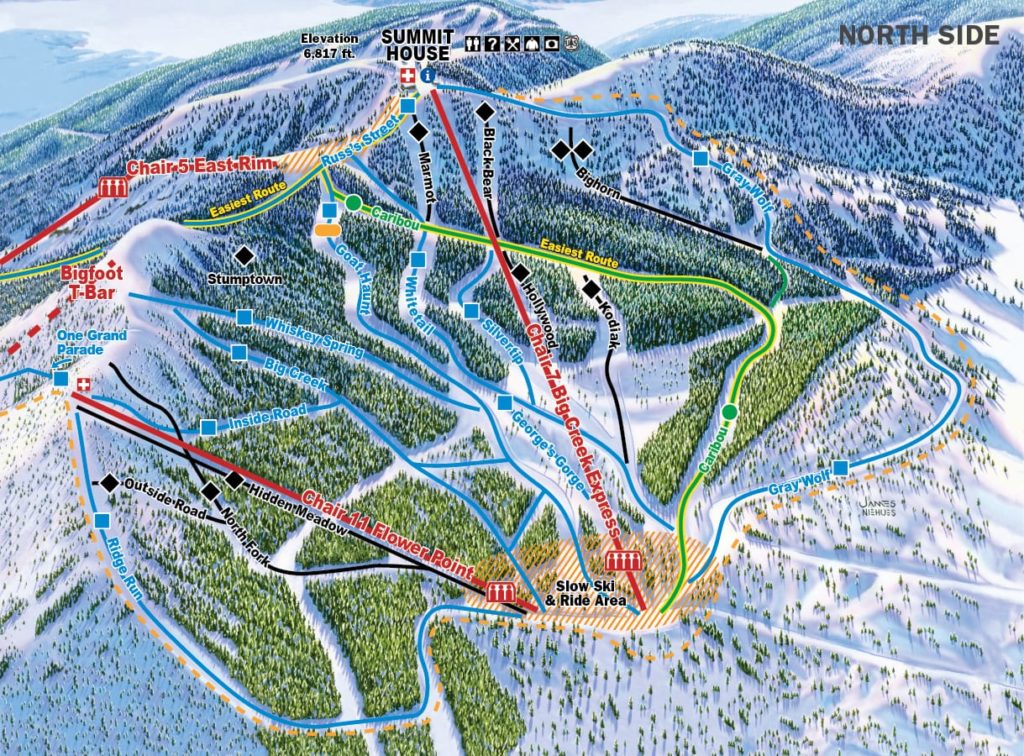 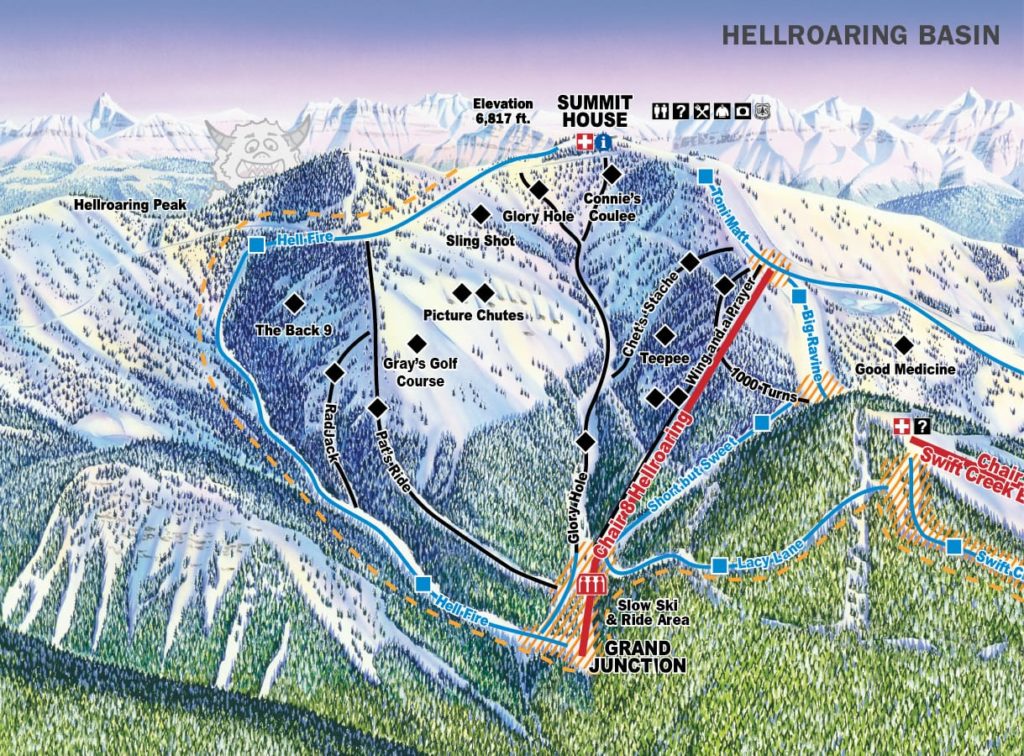 Whitefish was the most significant new resort on our 2022 Big Trip through Utah, Idaho, Montana, and Washington.  The resort has been expanding and improving more rapidly than most in the years leading up to our visit, and they seem determined to become a major player in North America.  It was a real treat visiting this place which has a lot going for it.

As we drove into the town of Whitefish we got a beautiful view of Big Mountain and the ski trails flowing down its flanks.  Like many northern resorts, the main ski pods actually face south.  That doesn’t work down south in California where the sun is blazing most days, but up in the far north where it’s colder and cloudy more often, that works just fine. 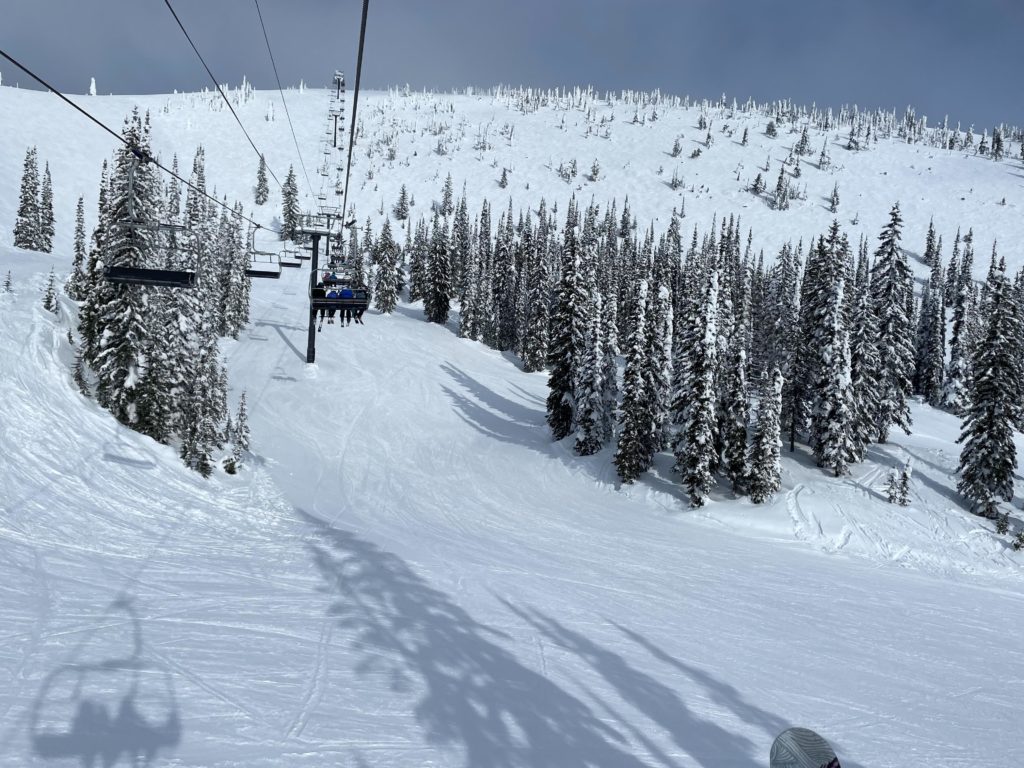 Our first day of skiing featured what we would come to learn was one of the better visibility days compared to average.  They stagger lift openings so we started on the Swift Creek Express chair which opens at 9AM.  Swift Creek has some of the best consistent intermediate groomers on the mountain.  We appreciated the fact that everything was groomed on that chair, and it had a nice pitch for intermediate skiing. 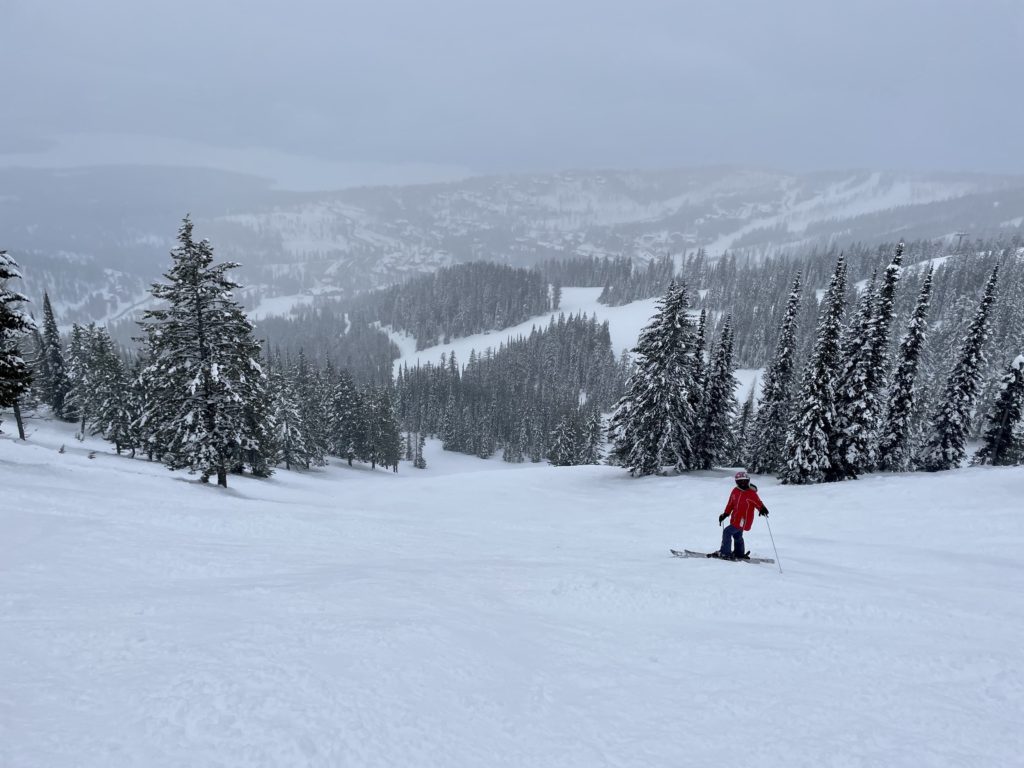 The Big Mountain Express is the main lift on the south side of Big Mountain.   We got to the top right about at 10AM and decided to take a tour with the mountain guides.  Notably, Whitefish actually PAYS the guides and we were told there are more than 20 of them.  Amazing!  They really are investing in customer relations and trying to make repeat customers out of everyone.  Our guide was excellent and showed us some of the better more advanced terrain that wasn’t completely obvious to us.

The Big Mountain Express serves over 2,000′ of vertical and a large collection and variety of runs.  It’s the most popular lift on the mountain and could be crowded at times.  Next year in 22/23 they plan to put in a six-pack “Snow Ghost Express that will alleviate some of the crowding by having another major lift on the south side going all the way to the top.  This will have the added benefit of starting near the base lodge.  Right now the base lodge is not at the core of the resort and it seems like it’s in a strange place.  This should be corrected somewhat after the new lift goes in. 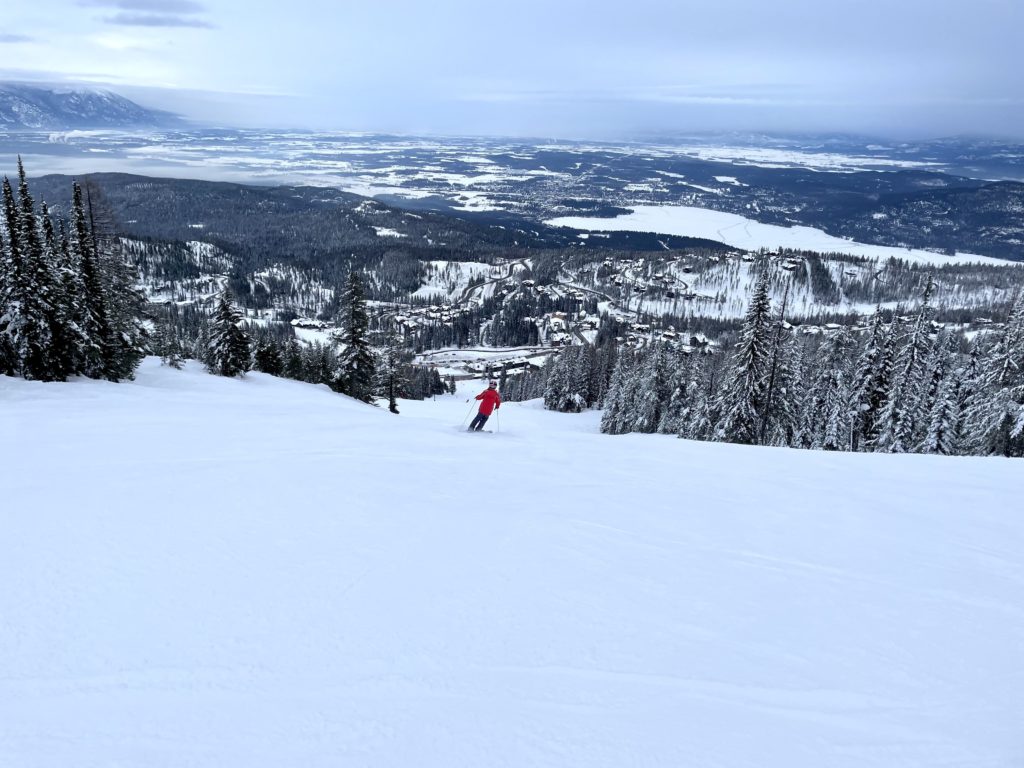 View of the town of Whitefish and Whitefish lake from the south side of Big Mountain, January 2022

On the south side of Big Mountain, the Inspiration run is just that — inspirational.  The views are incredible on a clear day and it’s a very long run.  Big Ravine and Tony Matt are the other 2 major runs off the top of Big Mountain.  If the snow was better off-piste I would think Ptarmigan Bowl and Big Face would be the places to be but the snow was very firm when we were there so we didn’t get a chance to spend much time in the trees.

The backside is the place to go when it’s foggy on the frontside.  We were told that sometimes the fog doesn’t fill in around the back and you can have relatively good visibility there.  We enjoyed the runs on the Flower Point chair the most.  The Big Creek Express is relatively flat except on lookers right at the top which features some of the steepest (but short) pitches.  We skied both the double-black Bighorn and the single black Blackbear runs there. 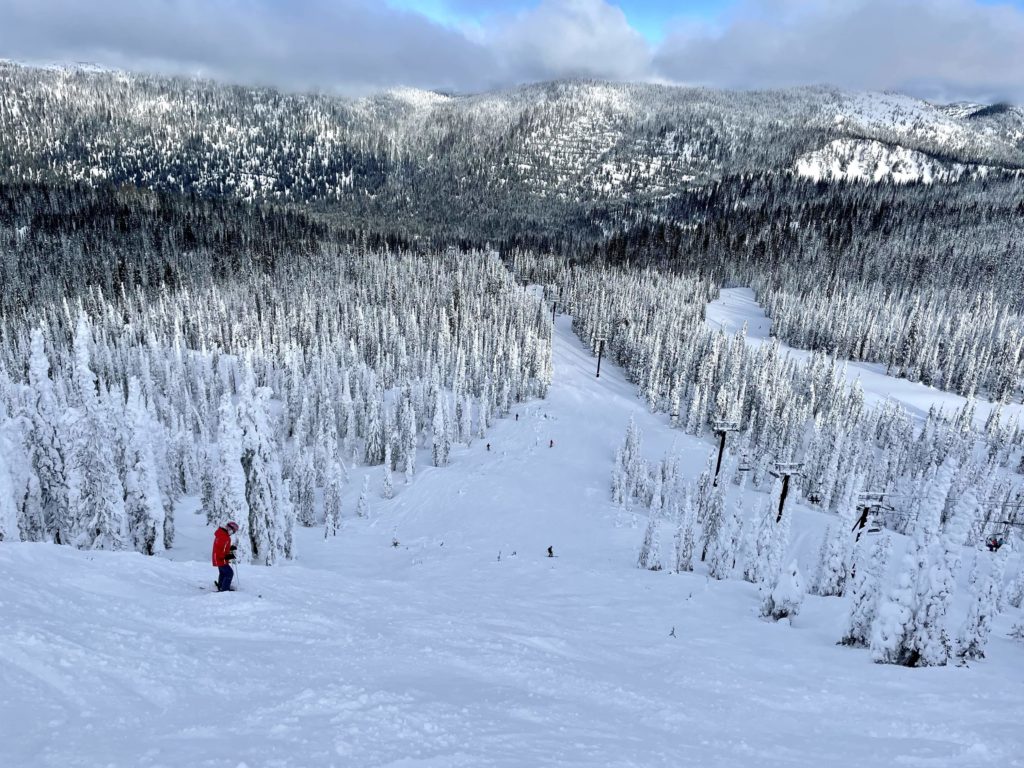 Big Creek Express on the backside of Whitefish, January 2022

New for this year, the Hellroaring chair was upgraded and relocated to a location that allows you to lap some runs on some of the best advanced terrain on the mountain. 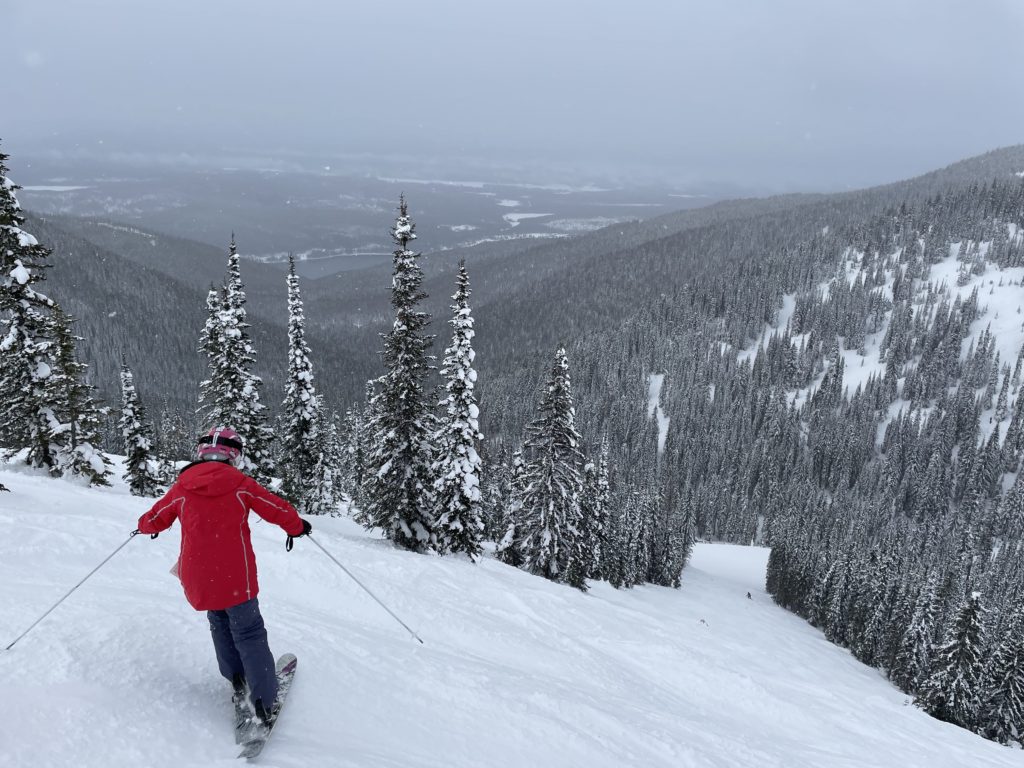 Terrain off the Hellroaring chair at Whitefish, January 2022

Lastly, the East Rim chair has some very steep cliff sections, but the actual vertical is pretty small and there are only a few paths through the cliffs that were skiable when we were there. 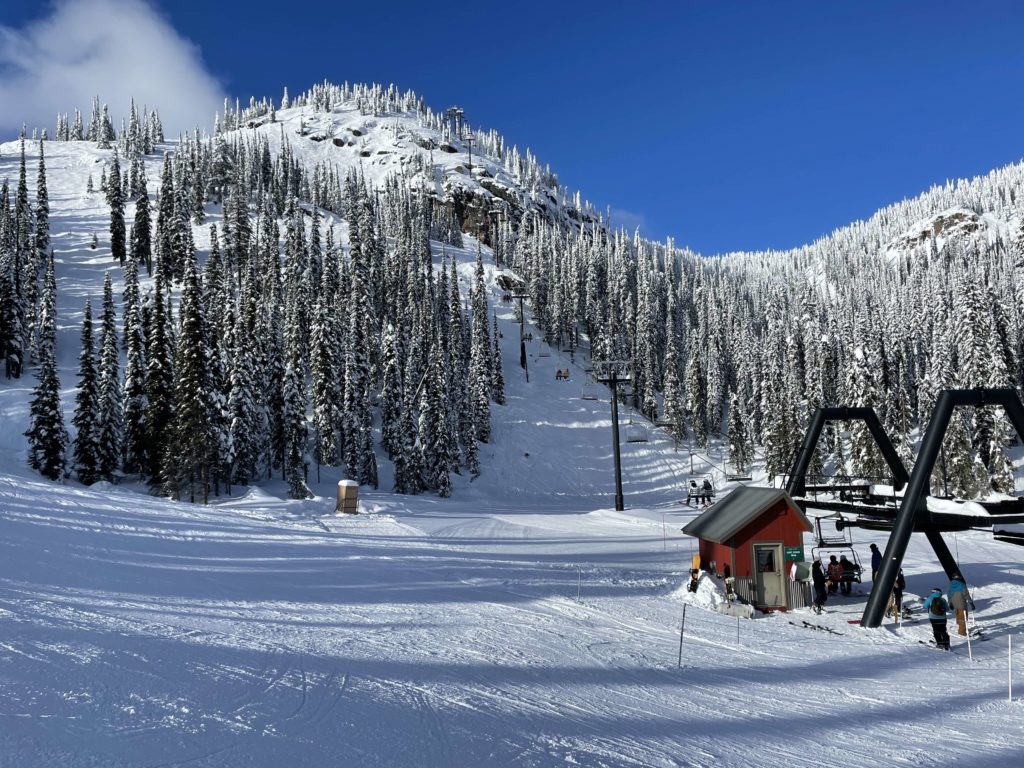 The first day we had a lunch tip and ate at the Hellroaring Saloon which is a very authentic traditional slopeside ski bar with good food.  This was much better than the limited offerings we found the next day at the base lodge cafeteria.  Overall the lodges at the resort are modern and well kept.  The main lodge actually seems to be the one at the top of the mountain.

It was a good thing we took a lot of pictures on the first day and got a good feel for the layout of the mountain because the second day was super foggy and it never cleared up.  This is the biggest problem with Whitefish.  The clouds are pushed up against the mountain from the prevailing south winds and the moisture laden air rises and forms fog.  Apparently this happens about 50% of the time, so make the most of clear days when they happen!

One notable run was down Toni Matt in the fog.  This is also the uphill route and we were thankful for the people hiking up the run because without trees at the top it’s easy to get turned around.  Hiking up seems to be a very popular activity there, which was lucky because it provided us some reference points to follow down. 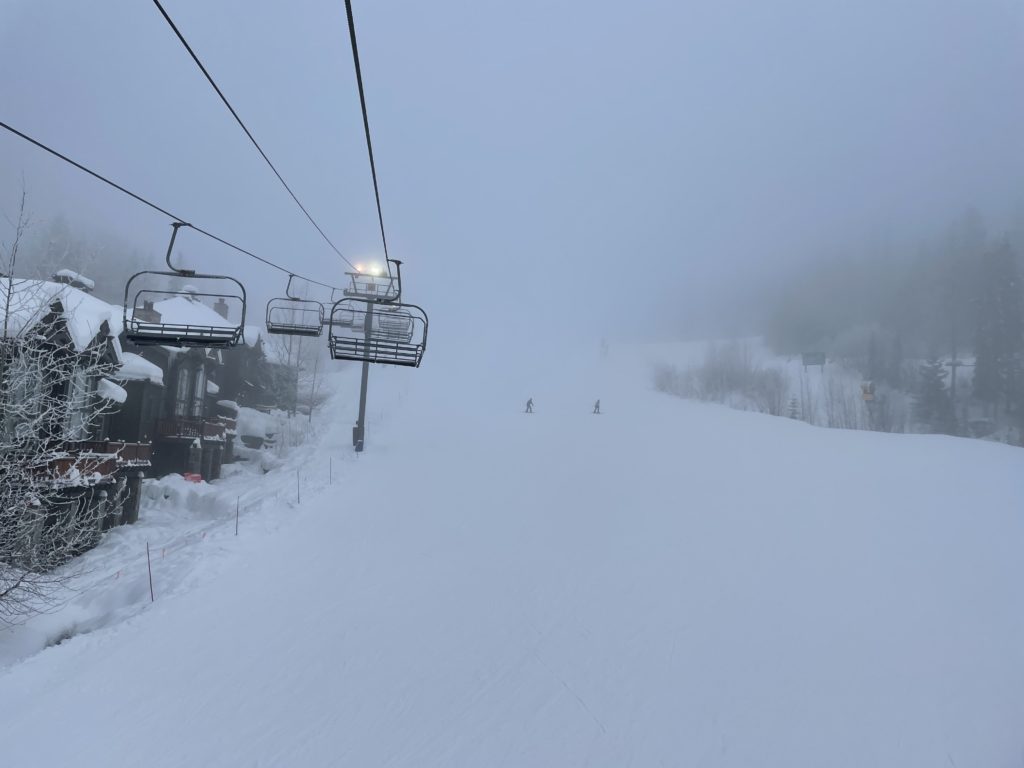 It’s definitely worth staying down in the town of Whitefish rather than up on the mountain because it’s a great walkable town with a ton of good bars and restaurants.  There is no shortage of nightlife in the town.  We really liked breakfast at the Buffalo Cafe on the morning of our last day. 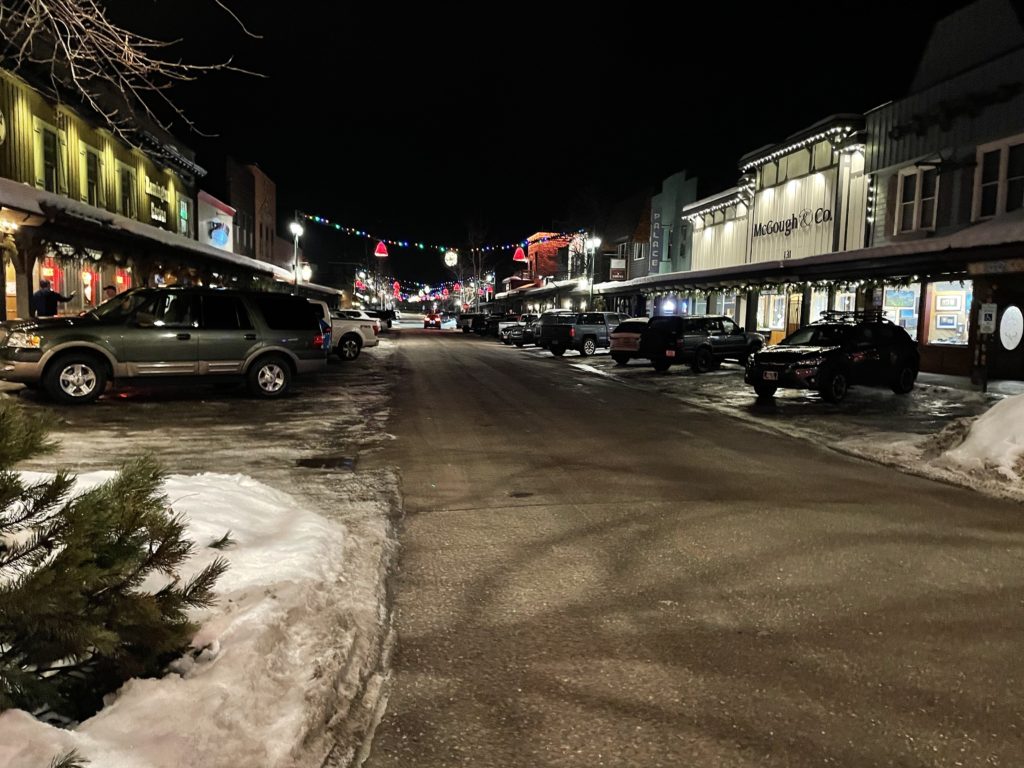 The town of Whitefish at night, January 2022 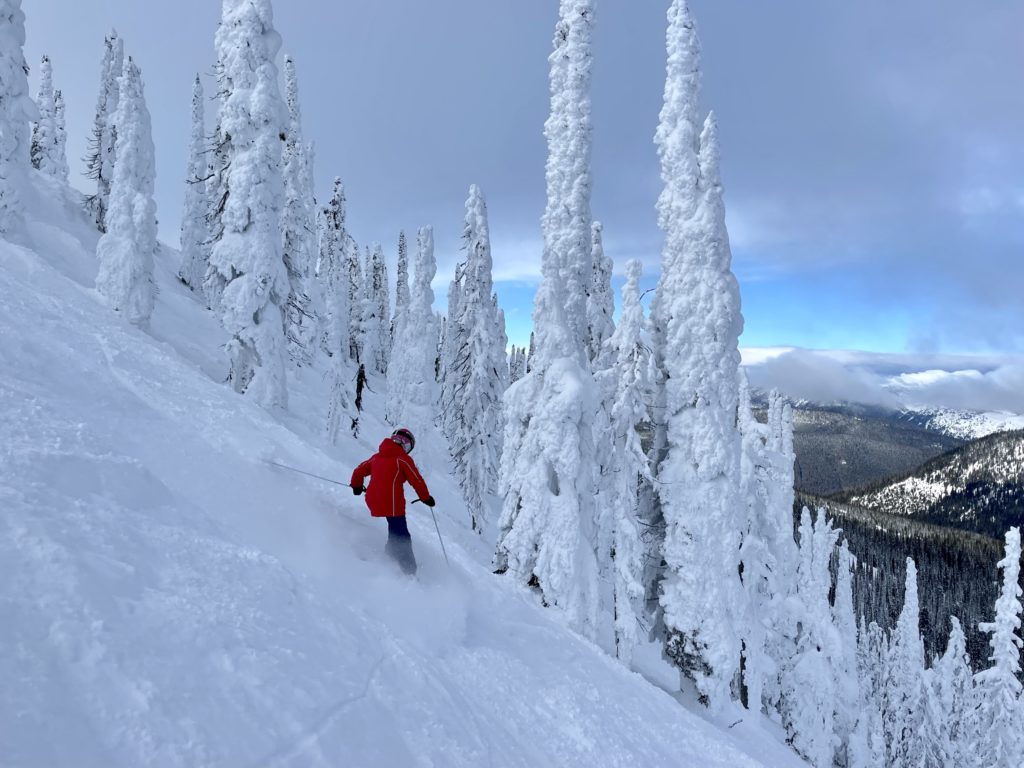 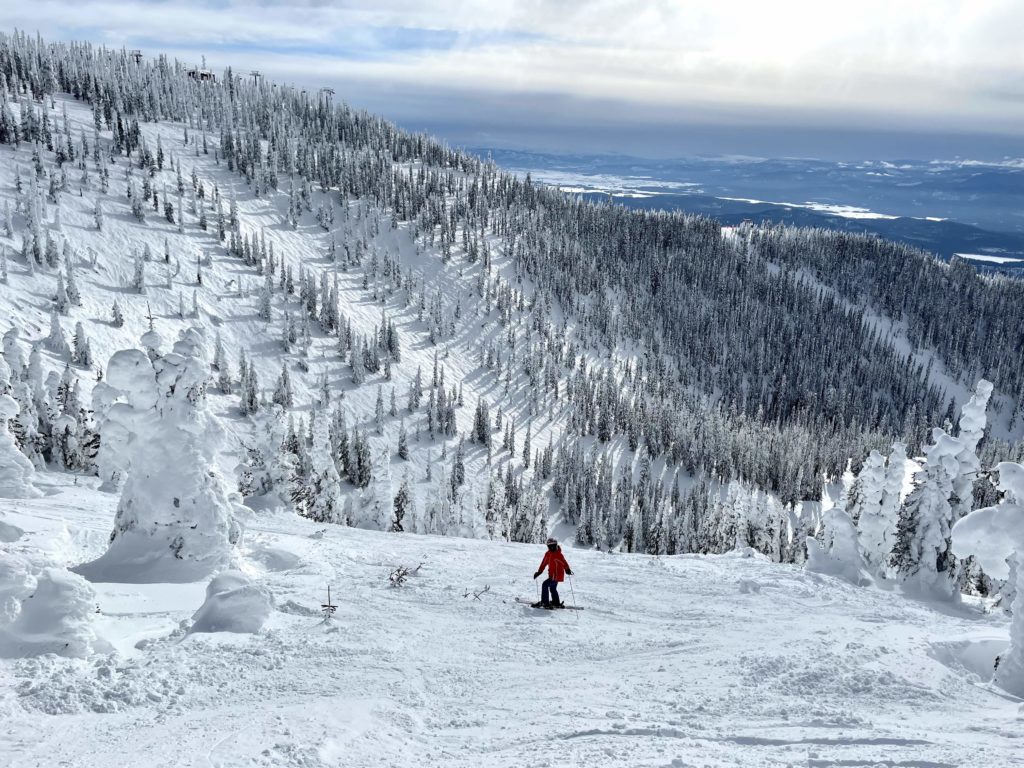 Whitefish has a great combination of terrain, lift network, snow quality, and ski town that make it a solid 4-star resort. We wish it was closer and easier to get to for us because it is one of our favorite resorts that we discovered on the project. 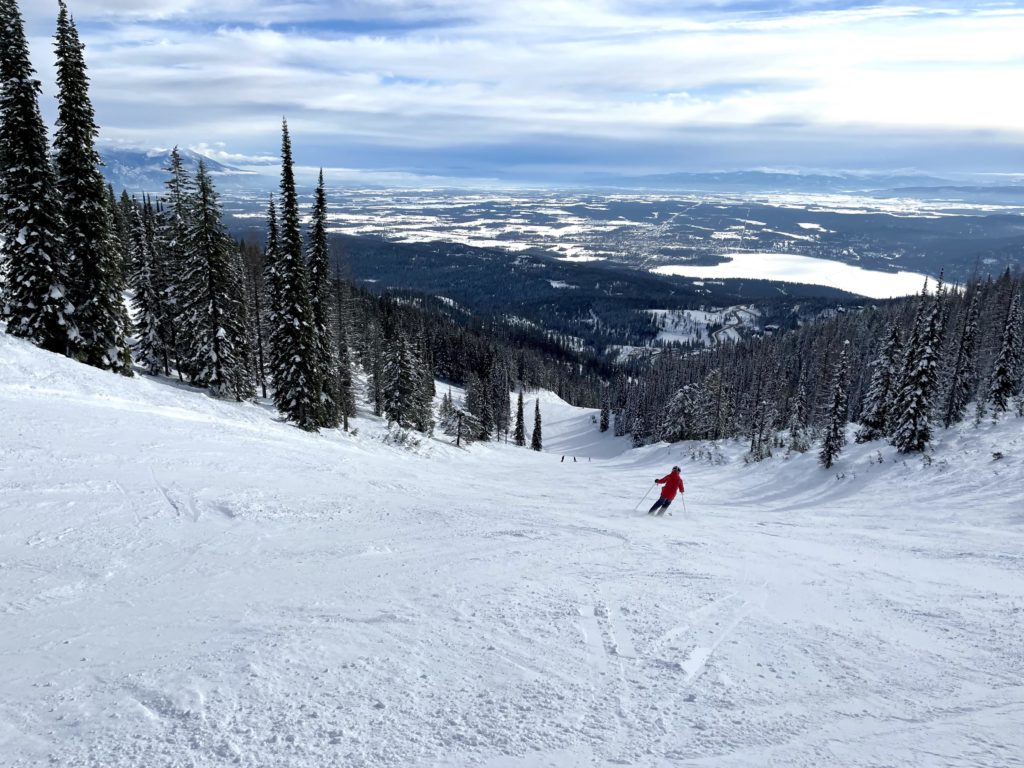 Another great run at Whitefish, January 2022