49° North is north of Spokane, WA in the remote northeast corner of Washington. It’s really close to Idaho but still feels very much like a Washington resort. This review is based on one visit during below average mid-season conditions due to a rain crust off-piste. 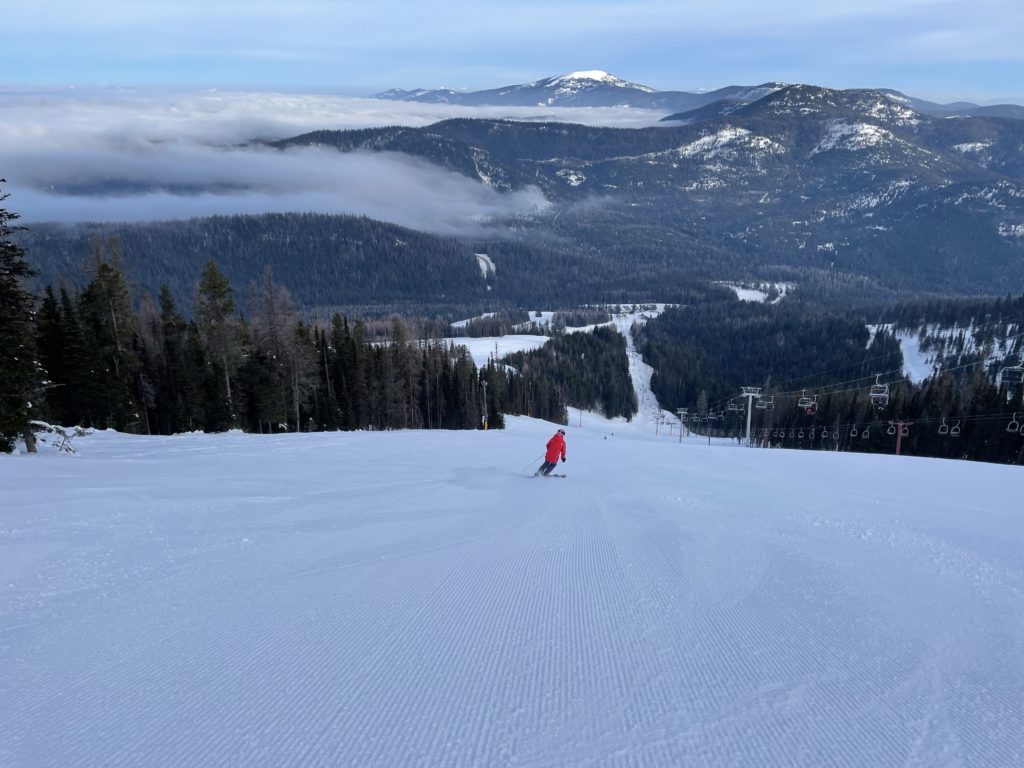 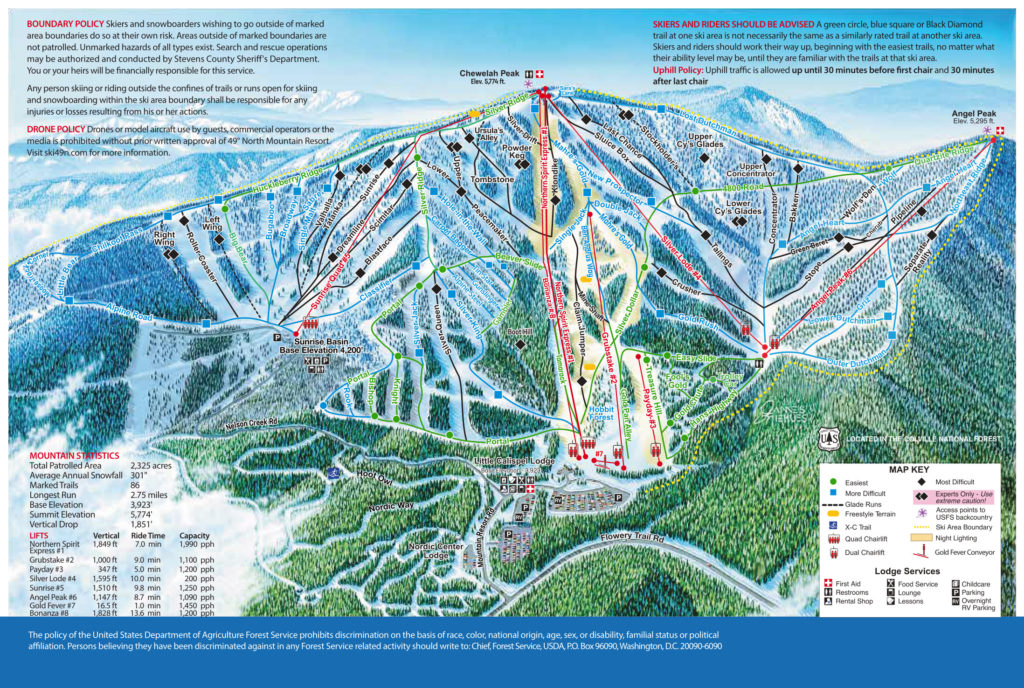 We struggled to include this resort on our list because back when we were first coming up with the final list they had a really bad snow year and never even opened.  This was also one of those resorts that is not open every day of the week.  Those 2 things made it somewhat of a risk and more inconvenient to plan a trip there.  Then in 2021 they installed a new high-speed quad that serves most of the terrain, and along with fewer days closed during the season the resort seemed to be progressing to the next level. 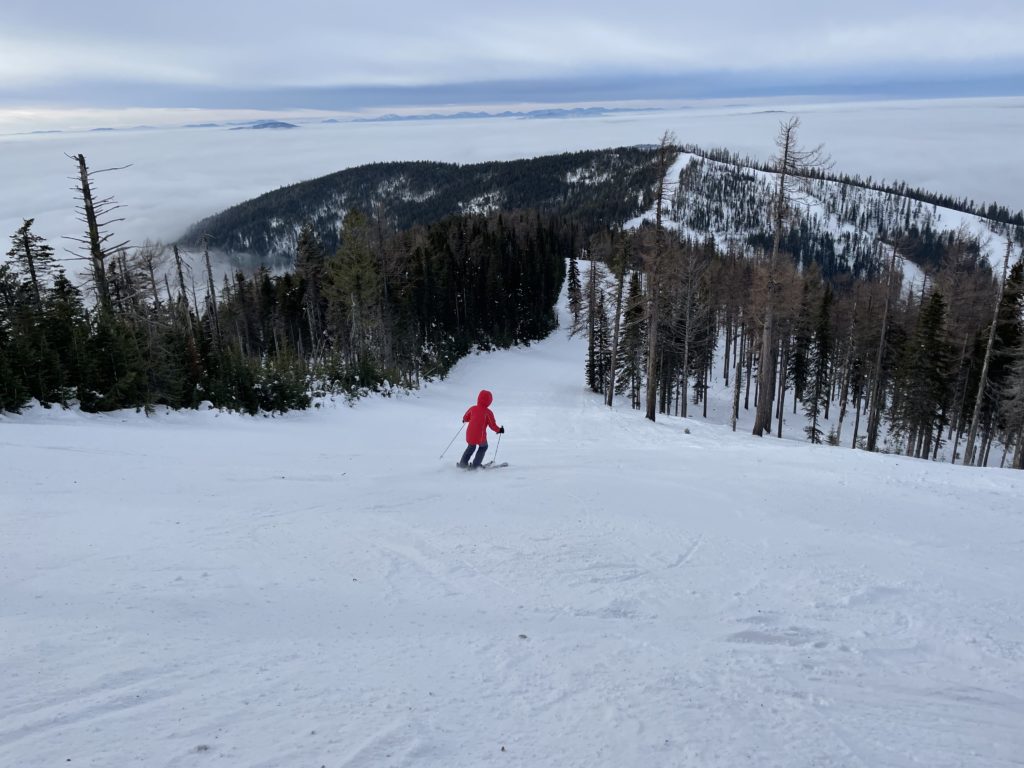 We visited in 2022 while we were also skiing at Schweitzer.  We were staying in the Sandpoint area and had to make the long-ish drive over there early in the morning because there really isn’t any lodging available anywhere near the resort.  It’s primarily a day trip resort for Spokane and the communities around it with no real possibility of becoming a true destination resort due to that lack of lodging. 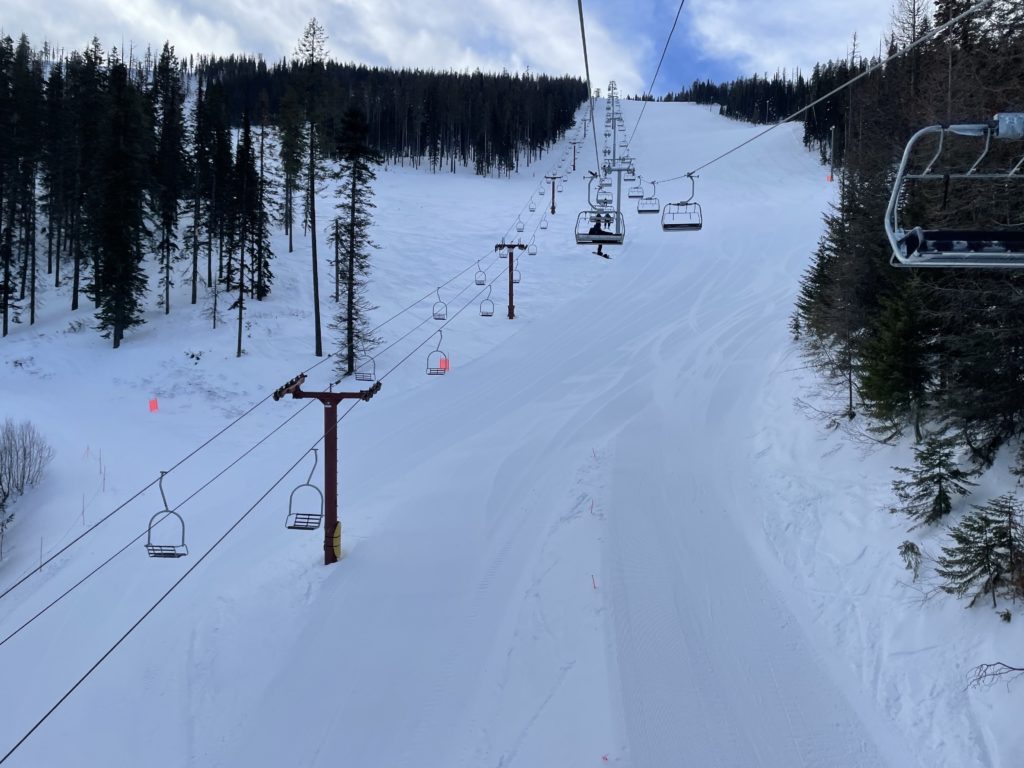 At first 49° North appears to be a single peak north-facing resort that could almost be served by the one high-speed quad “Northern Spirit Express”.  This is where we started and we immediately enjoyed the steep grooming on Klondike right under the chair.  The top is a nice steep pitch and there are several runs fanning out from there that are similar.  Kind of like Flagstaff peak at Deer Valley, but without the wall-to-wall grooming.  When we visited, the resort had experienced a typical light rain event that turned off-piste into a crusty mess, so we were limited to the groomers and more grooming would have been better.  Still, the amount of grooming for a resort that operates more frugally than a place like Schweitzer was adequate even if it wasn’t extensive. 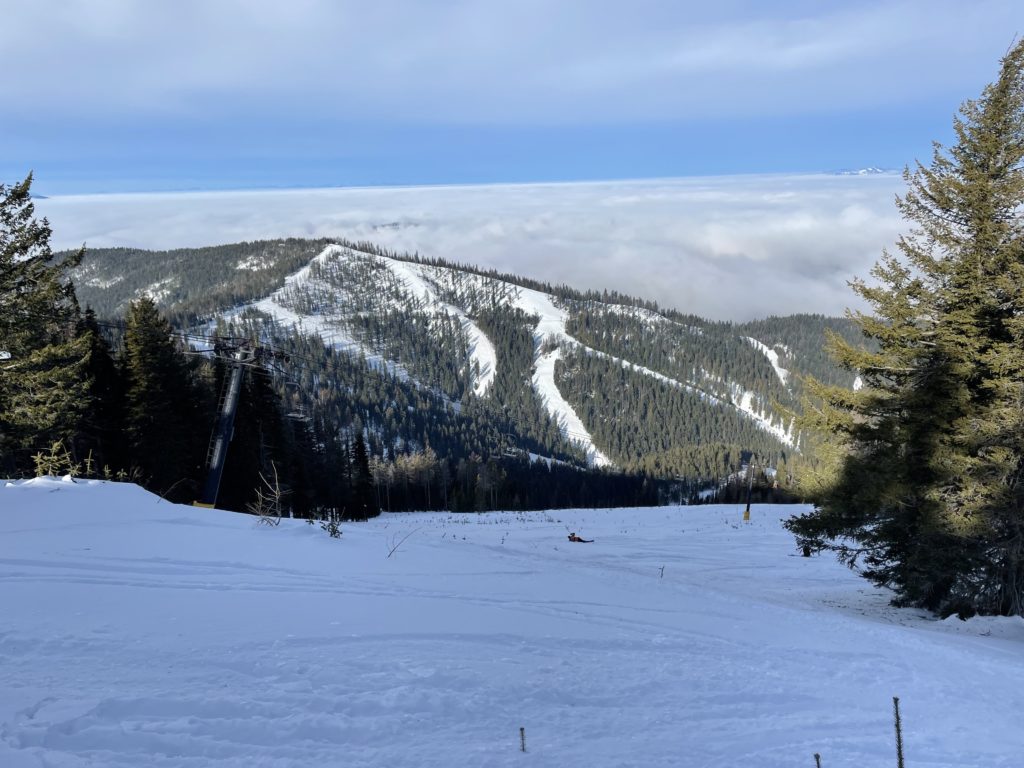 Next we skied the Angel Peak area which has less vertical but enough to be interesting at about 1,100 ft.  Not much grooming happened over there so that was a quick couple of runs.  The bottom of that pod is interesting in that it drops down into a deep dark canyon which was very cold.  We felt sorry for the lift ops down there in the permanent shade of late January! 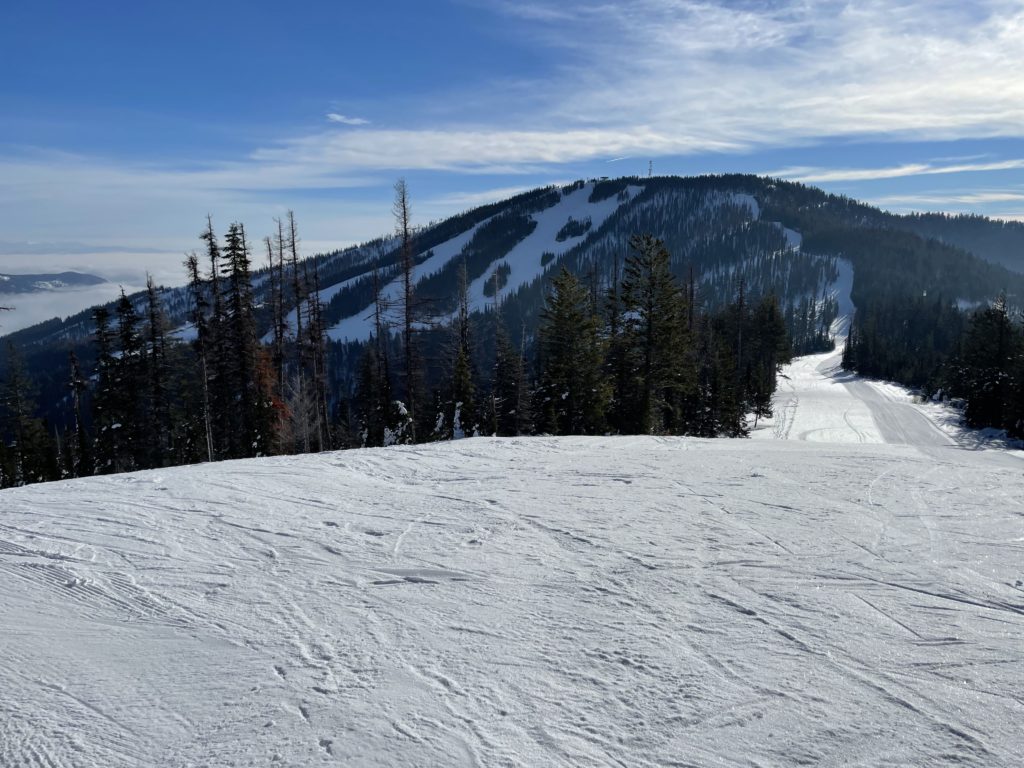 Looking at the Silver Lode terrain at 49° North from the top of Angel Peak, January 2022

The Silver Lode chair would be a great lift on a powder day when you could ski the steeper gladed runs to skier’s left of the lift.  These were actually closed due to the snow conditions when we were there.  We saw some people try to poach it because it looked like untouched powder.  Instead, they found breakable crust conditions which led to instant faceplants and instant karma for poaching. 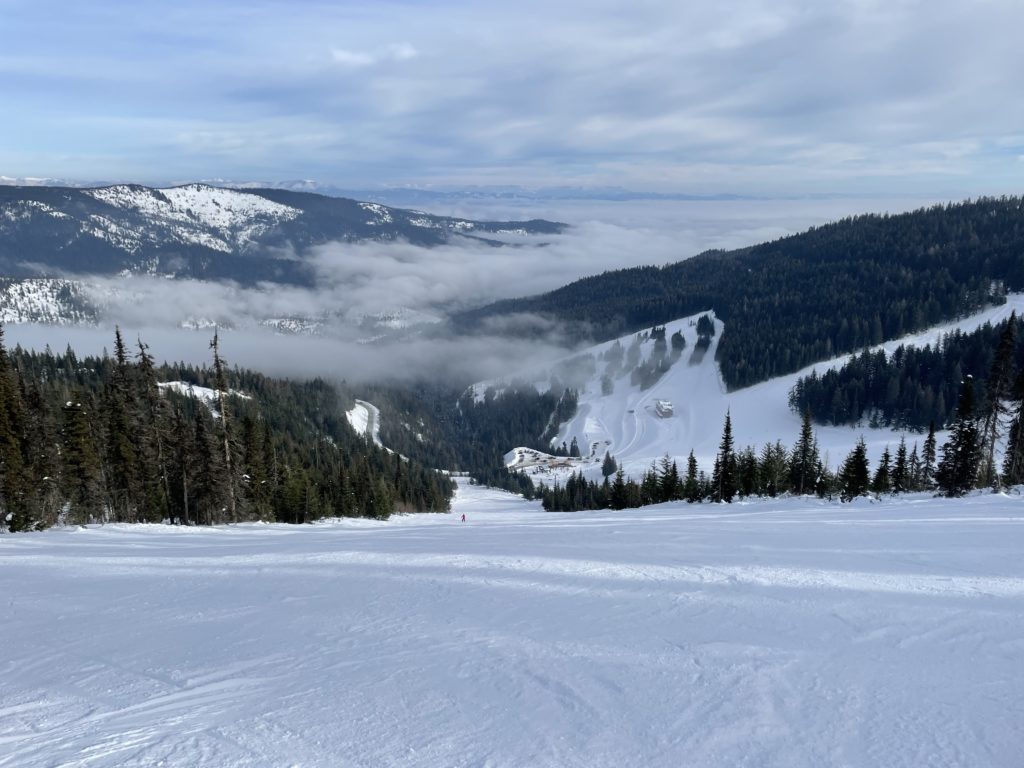 The Sunrise quad is the other main zone on the mountain and that one is actually the most popular on the mountain.  It would be better if it could be shortened so you didn’t have to ride the same run “Silver Ridge” on the top 1/3rd every single time.  It makes for a long 10-minute lift ride every run.

All this makes the terrain somewhat awkward in many places even though it appears pretty straightforward on the trail map.  Many of the runs we thought would have been regularly groomed on the left or right of the high-speed quad were not groomed which put us on the same runs on the top 1/3rd or 1/2 of the mountain repeatedly.  At one point the main route feeds into a terrain park which is harder to bypass than it should be.  We went through the terrain park once because of that and got yelled at by the park attendant for going too fast(!). 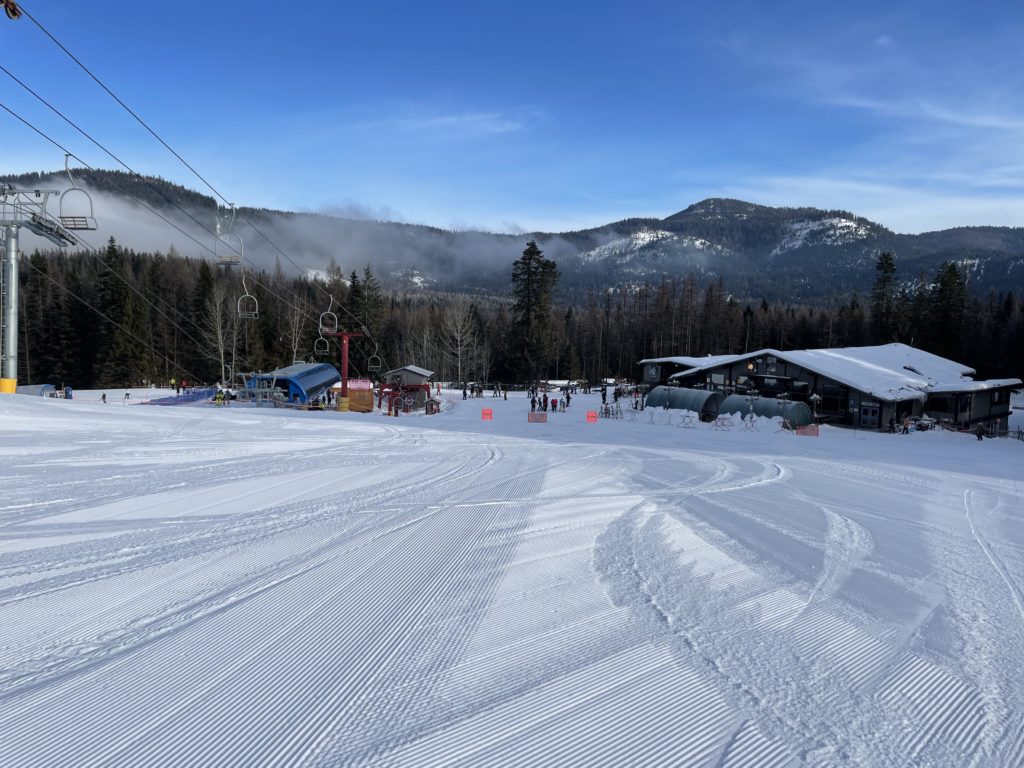 Base lodge and food

The food at the base lodge was above average for a small resort, but getting it took some time.  The lodge is just too small for the resort and was packed even before noon.  The line moves very slowly and people that came in 30 minutes after we did probably stood in line for 45 minutes or more.  This was on a Saturday when there weren’t any lift lines to speak of.  This is typical of a resort that doesn’t have deep pockets to build a new lodge as they get more popular. 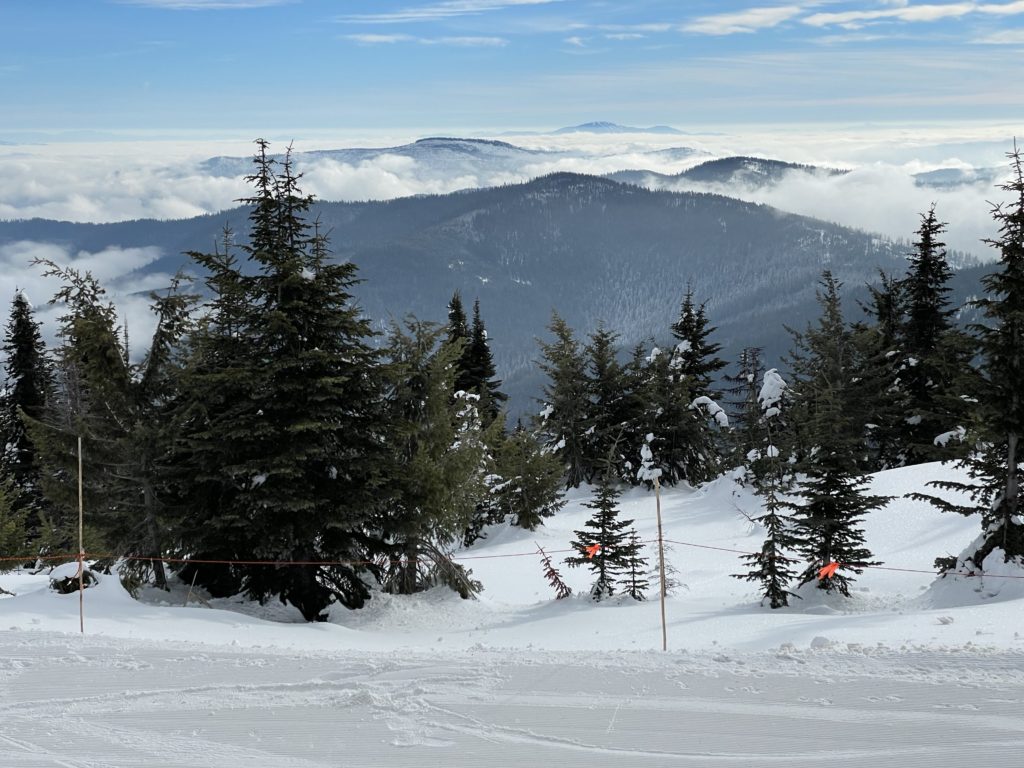 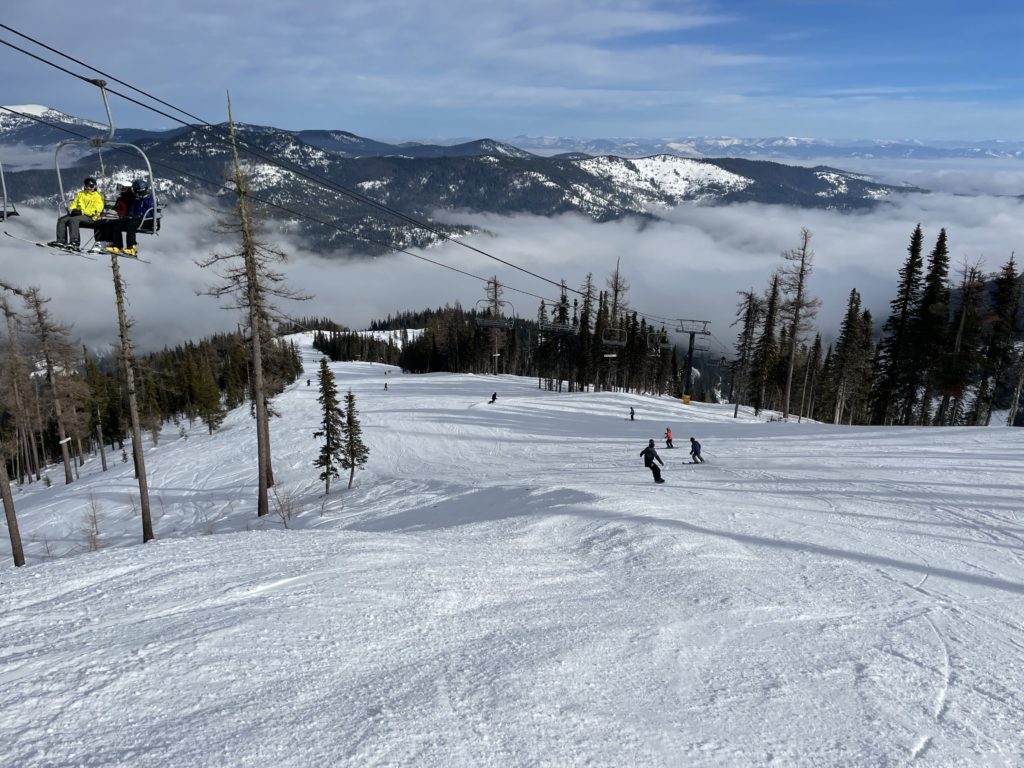 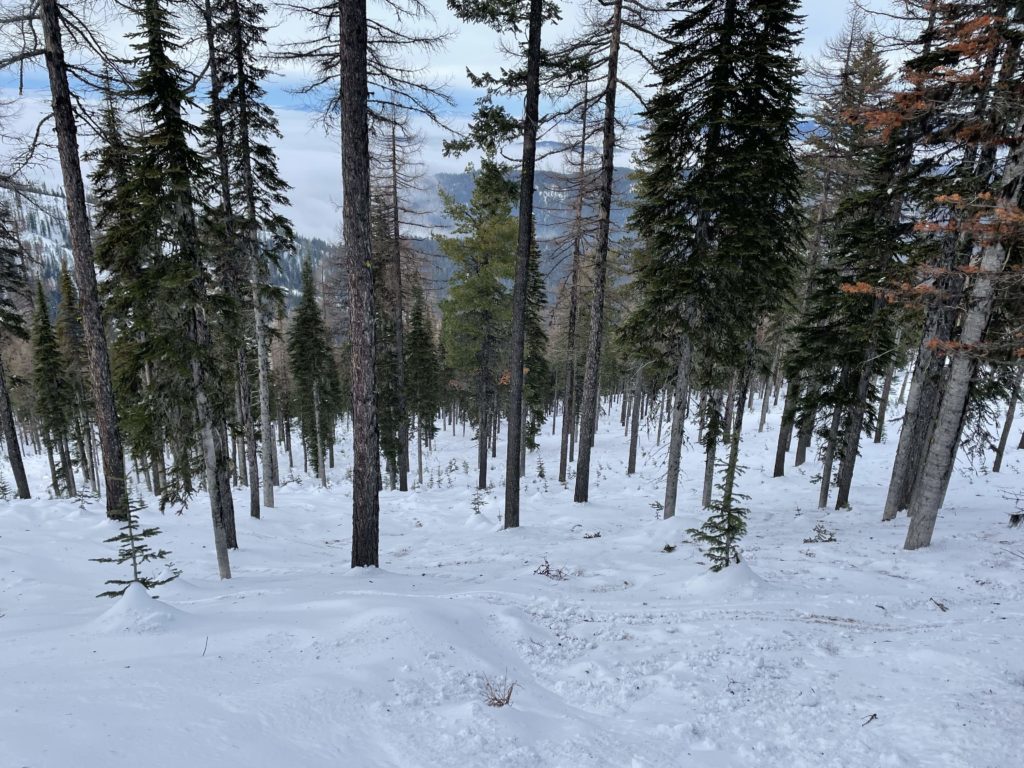 49° North would be a great option for people from Spokane and the surrounding areas as a home resort with the “Combo” season pass for Silver Mountain and 49° North. It doesn’t attract as many tourists and crowds as nearby Schweitzer does so will be a more consistent and less hectic experience.  As a Combo pass holder it would be a great alternative to Silver Mountain for variety a few times a year. For us it’s not really something we would go out of our way to return to, but it was a fun place to visit for a day.