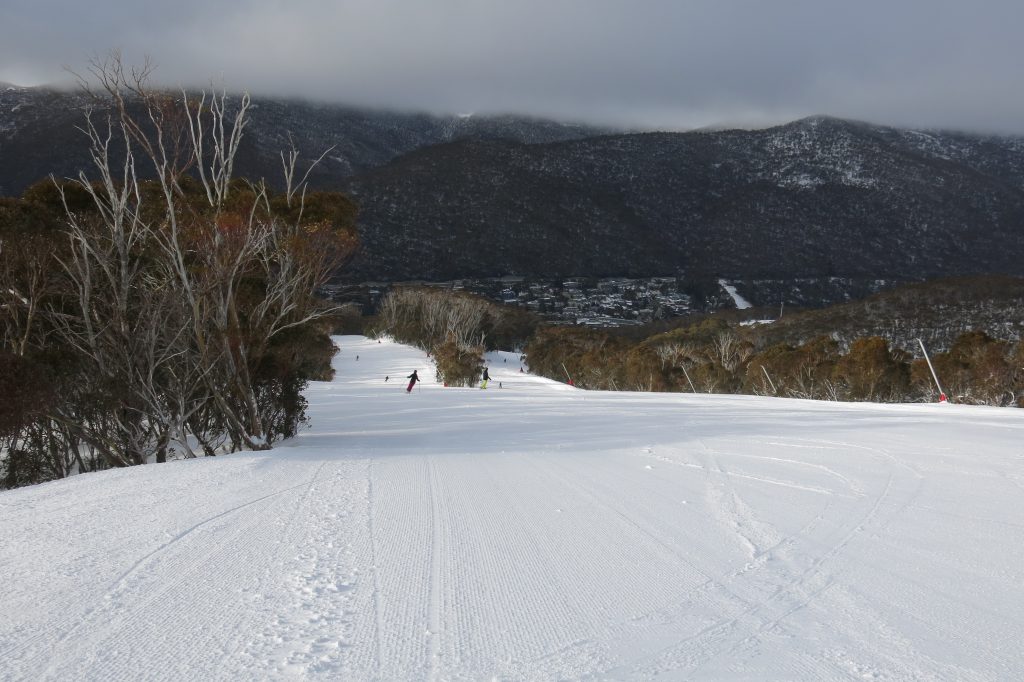 This summer I got a chance to check off one of the items on my bucket list — skiing in Australia!  My daughter lives in the Outback in Alice Springs has been there for 1 1/2 years, so it was time for a visit.  Since it is such a long journey I decided to take a few extra days to see Sydney and to go skiing in the Snowy Mountains.  AiRung couldn’t make it on this trip unfortunately.

Above tree-line at Thredbo, August 2018

After looking at the map and logistics and talking with Jack at Snowpak.com, I chose to ski Thredbo and Perisher.  Jack rated Perisher as #1 and Thredbo as #3 in his article here: The Best Ski Resorts in Australia. 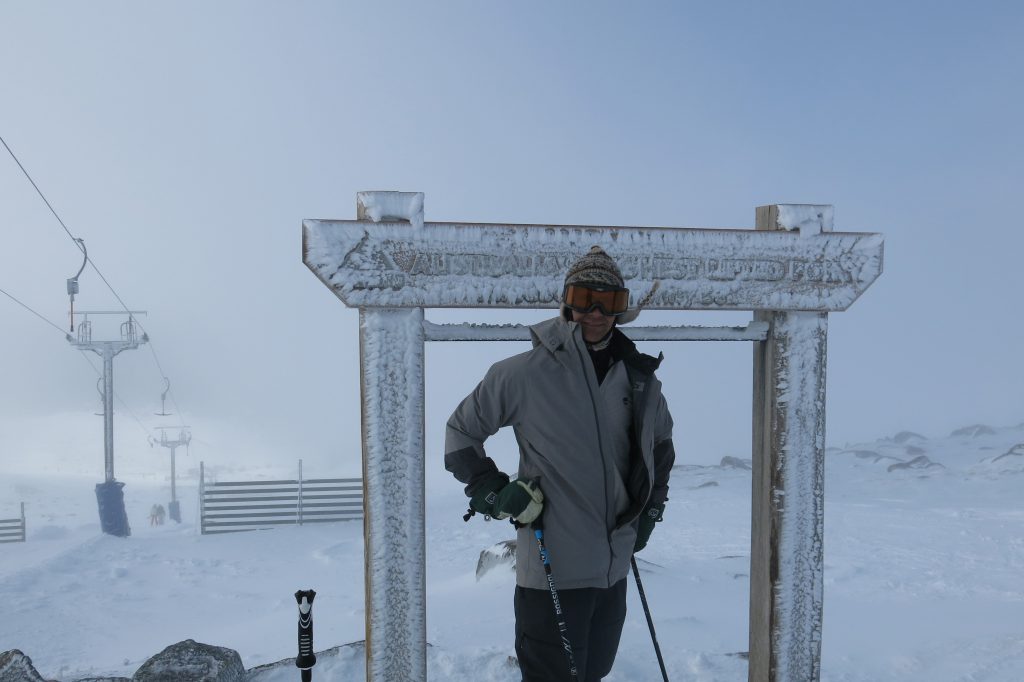 I spent most of Sunday driving from Sydney to Jindabyne, which is the closest town to both Thredbo and Perisher and a great spot to spend a couple of nights with lots of restaurants and bars, and the largest per-capita number of ski shops I’ve ever seen anywhere — over 20 for a town with a population of 2,600!  Of course these shops are to serve the hordes of skiers that descend on Perisher and Thredbo.  I did some digging and it looks like those 2 resorts are responsible for somewhere between 1 and 1.5 million skier visits per year, which is huge.  That’s why Jack suggested that I ski on a weekday, which was great advice.  I did see lines at Perisher, but nothing too bad. 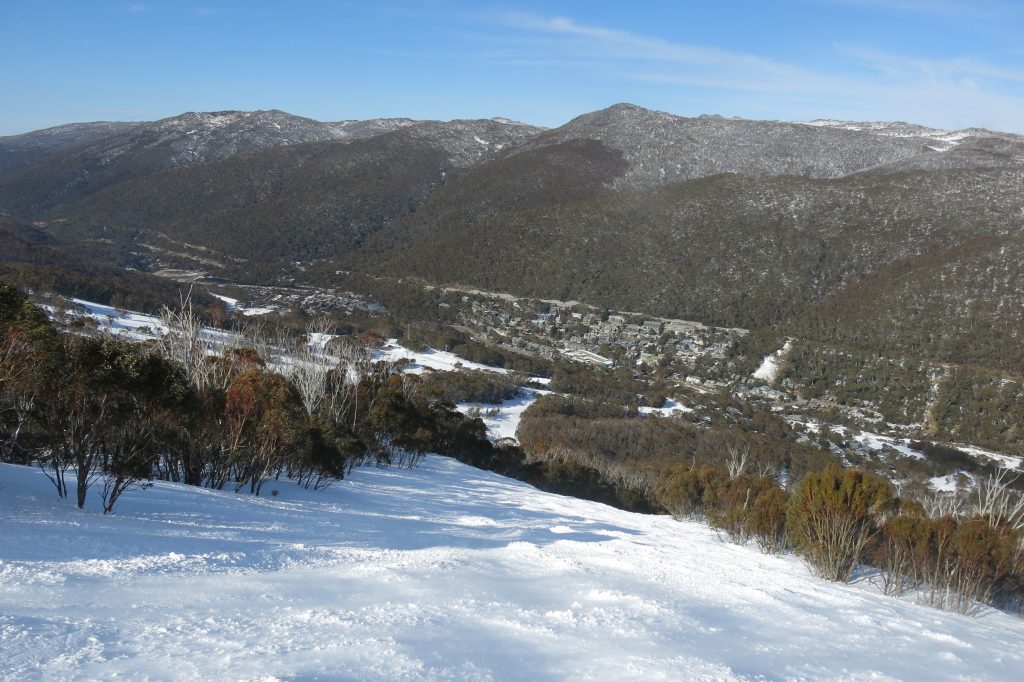 I skied at Thredbo the first day, and was super impressed with that resort.  It has both the highest and lowest lift-served elevations in Australia, giving it a respectable 2,200 feet of vertical.  It also has a great lift network with 3 high speed quads and the best lift in Australia: the Kosciuszko Express, which has a vertical drop of over 1,800 feet.  I spent most of the day on that lift.  There were patches of wind-blown powder in the trees, and lots of top-bottom groomers.  There is some challenge there, but nothing that could be considered double-black.  Good snowmaking coverage assures skiing even if natural snowfall is lacking. 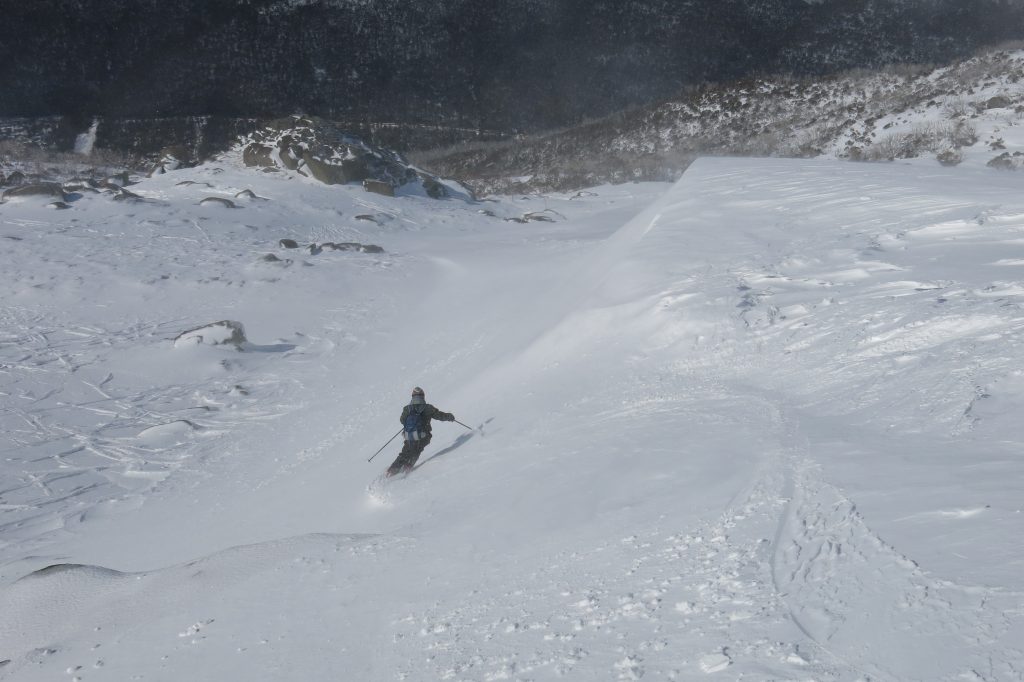 Graham shows me the soft snow at Thredbo, August 2018

The very first chair ride of the day I met John and Graham: 2 Thredbo regulars who spent the whole day showing me around.  Graham had been skiing there since the 70’s and had lots of stories and history for me.  John and his wife invited me to join them for dinner in Jindy after skiing, so it was a super fun day and I got to learn a lot about the skiing culture in Australia.  These 2 guys had to be the best 2 skiers on the mountain and as long as I was following them, I was skiing soft snow and powder. 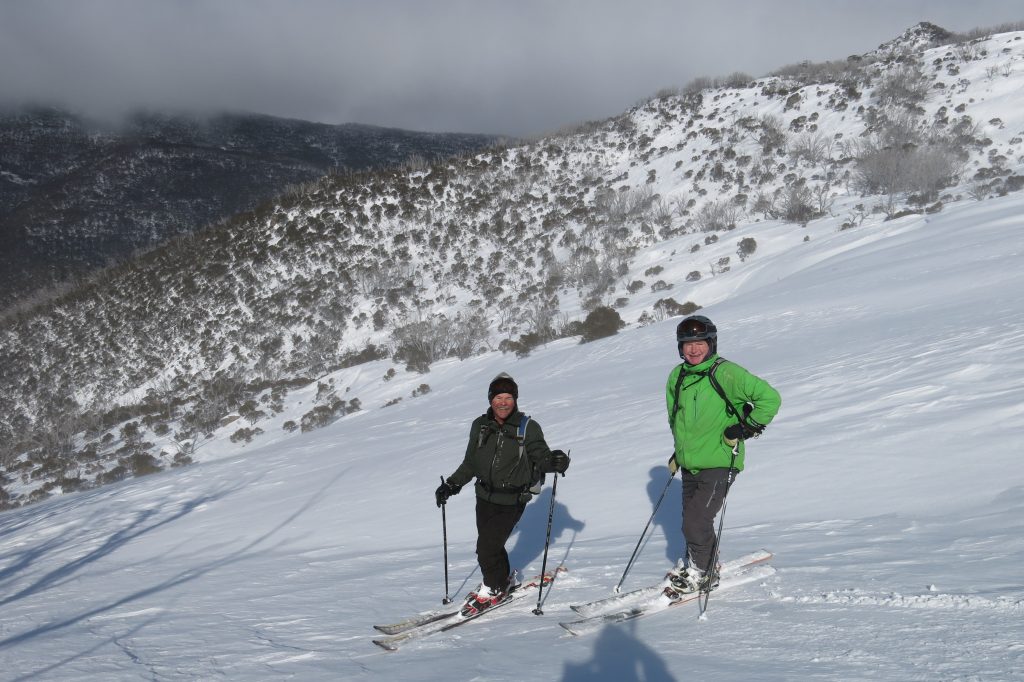 The next day I drove up to Perisher, the largest resort in Australia at over 3,000 acres.  It has a higher base but has much less vertical and is mostly green or easy blue terrain.  In fact the max skiable vertical there is only 1,200 ft.  It also has only one high-speed lift which has very little vertical and serves beginners. Perisher was underwhelming but impressive in a silly way — being so flat and spread out with so many T-bars and pointless long flat chairs.  I’ve never seen anything like it anywhere else. 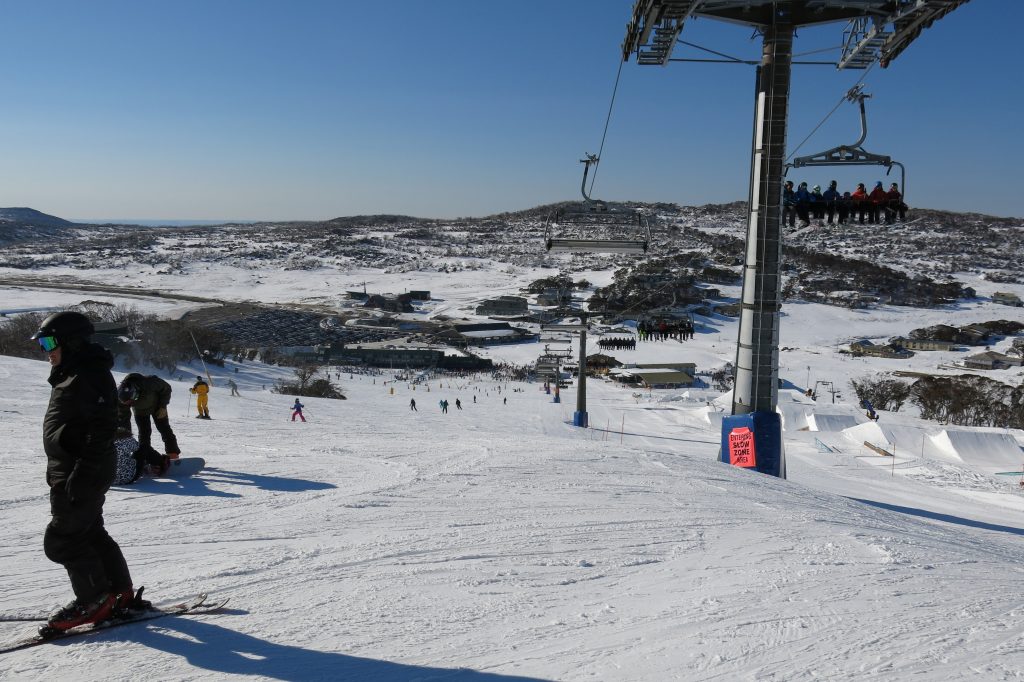 The best chair is the Ridge Quad which has some legit steep terrain on 2 trails which provided the best runs I encountered in Australia.  Other than that, there was only Mt. Perisher on the other end of the resort that had decent vertical and enough slope to make it interesting.  Once again, I had a friendly guide Mark who I met on one of the many T-bars early in the day who led me to the steeper stuff.  Thanks Mark! 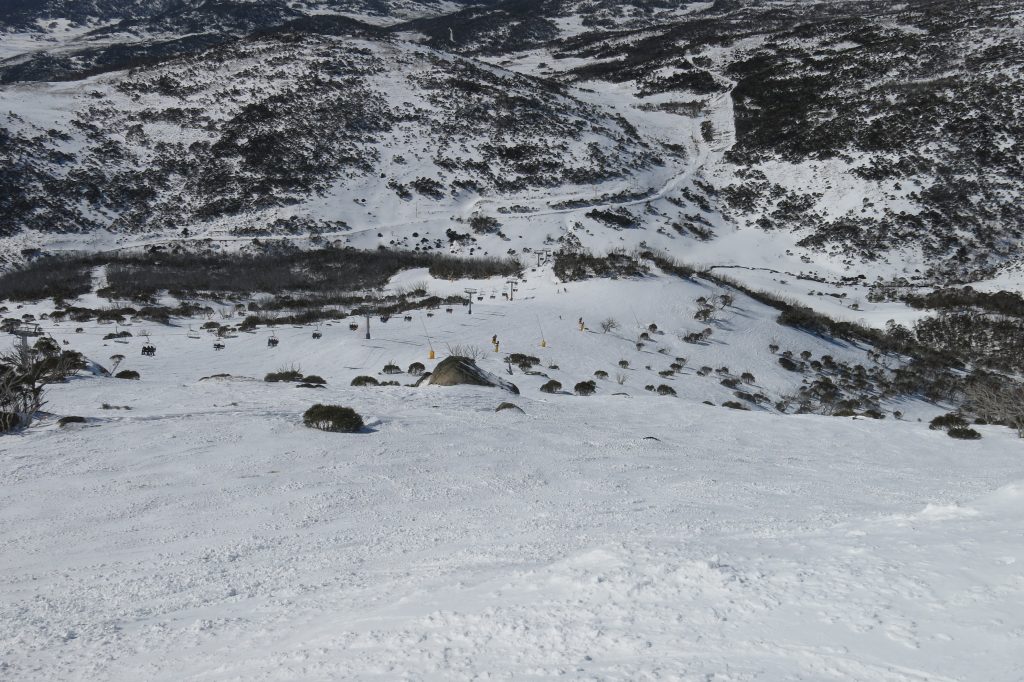 Steeper terrain at Perisher off the Ridge Quad, August 2018

Snow was excellent according to the locals I talked to, and I thought it was good even by Tahoe standards.  They don’t get the depth we are used to, but all the runs were covered and I never hit a rock in 2 days of hard charging off-piste. 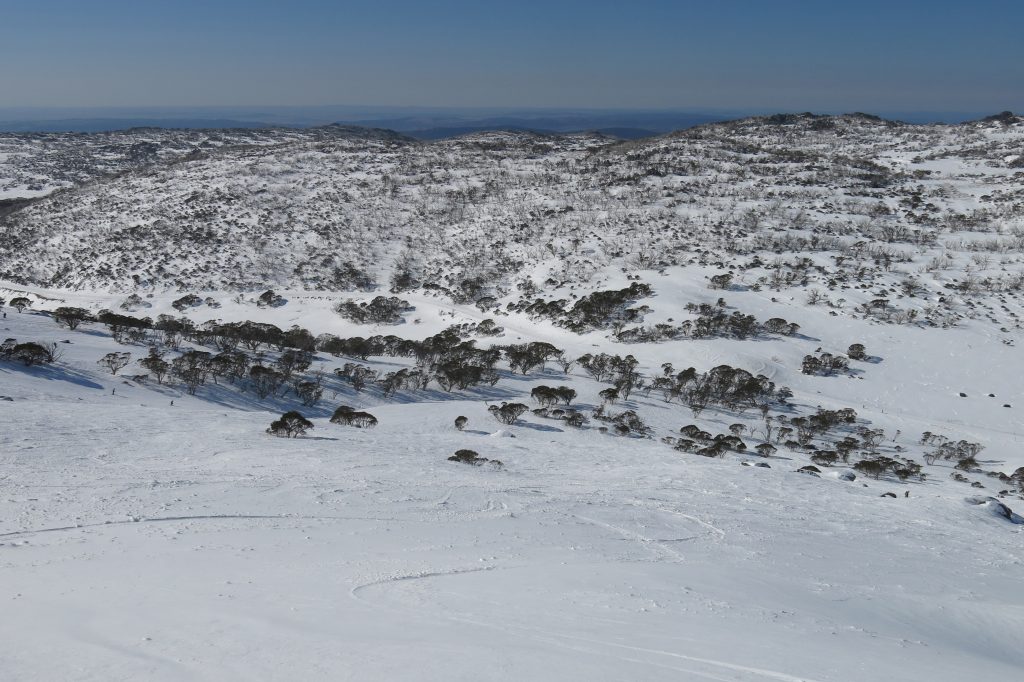 I felt like a star skiing in Australia and had a great time.  Locals were very interested in showing me around and I’ve really never skied anywhere else where people were that friendly. Once I opened my mouth to speak they found out I was from California and they seemed so happy that I had made the effort to ski in Australia.  It’s a fun skiing culture with less emphasis on challenge and more on just getting out onto the snow and sliding around. 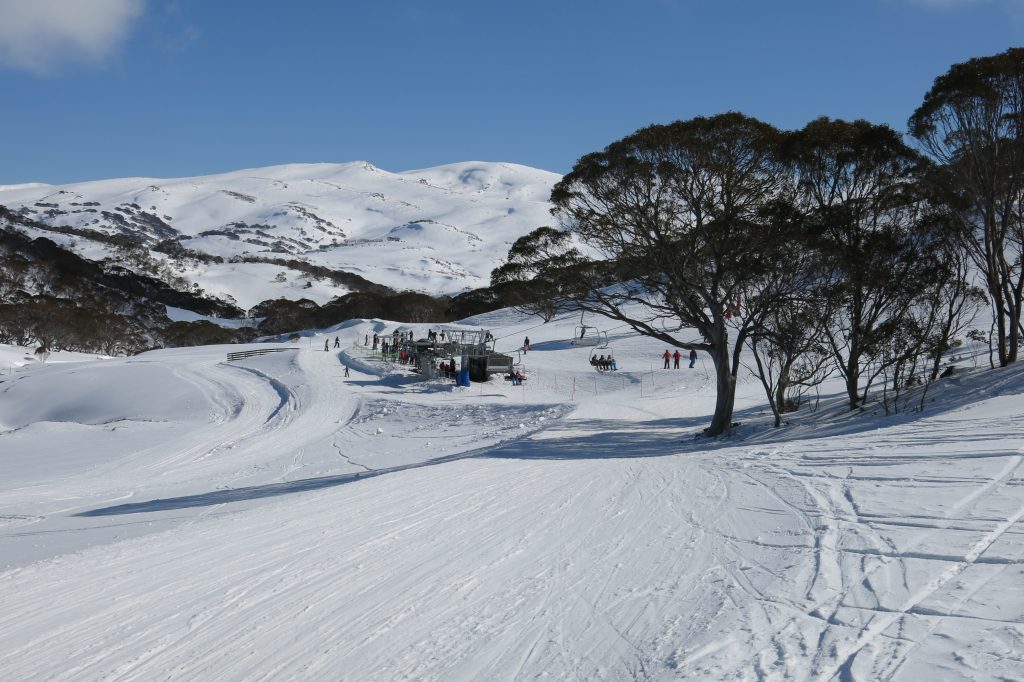 Base of the Freedom Quad at Perisher with a view of Mt. Kosciuszko, August 2018

I would go back to Thredbo which I would rate at least 3 out of 5 stars on our scale.  As far as choosing Australia over New Zealand for a summer skiing vacation, New Zealand definitely has better resort skiing at Treble Cone, but I’d rather ski Thredbo over the other major NZ ski resort I skied at which was Mt. Hutt.  The thing that New Zealand has over Australia is really impressive mountains that you can only get to with a helicopter or by hiking, but the resort skiing is actually pretty comparable. 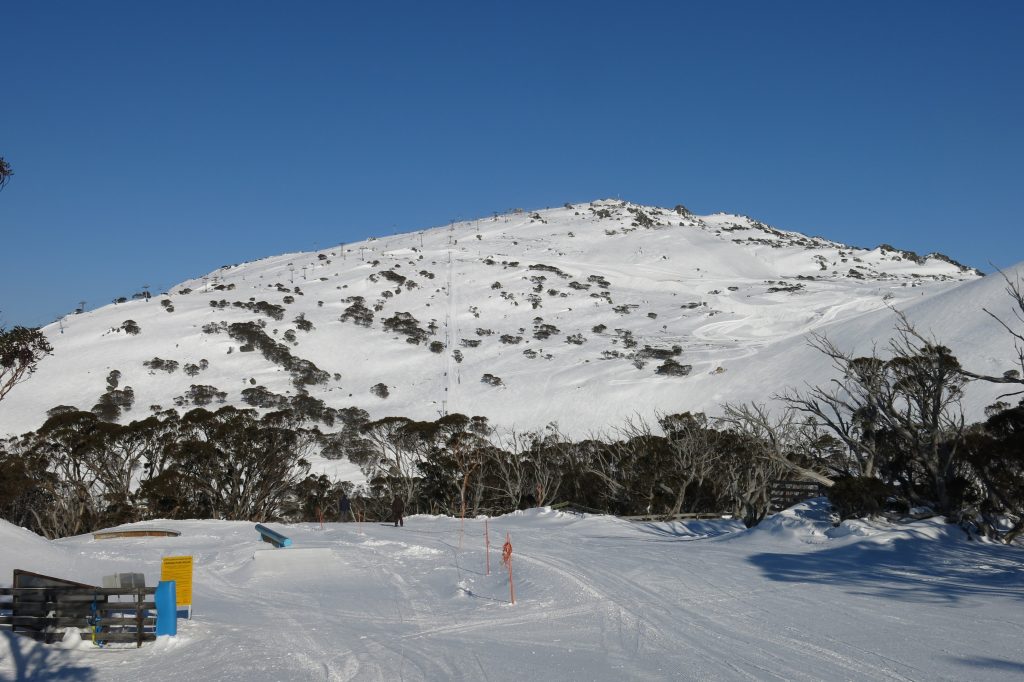 Now that I have had my summer skiing fix, we are waiting for Winter in North America.  I’ve been doing a lot of mountain biking to stay in shape.  Hopefully winter provides us with deep snow and cold temps, but even if it doesn’t we are certain to have a good time.  We have already booked our Whistler/Blackcomb trip for Christmas and are also planning to go back to Telluride and my old home town Crested Butte in March.  Can’t wait!