This was a record-setting winter in Northern California which received the most rainfall ever recorded since records have been kept.  This translated into a LOT of snow and Tahoe got the most snow of any place in North America this season.  Our home resort Heavenly received almost twice as much as normal at 639″, obliterating the previous record of 500″ set in the 10/11 season. 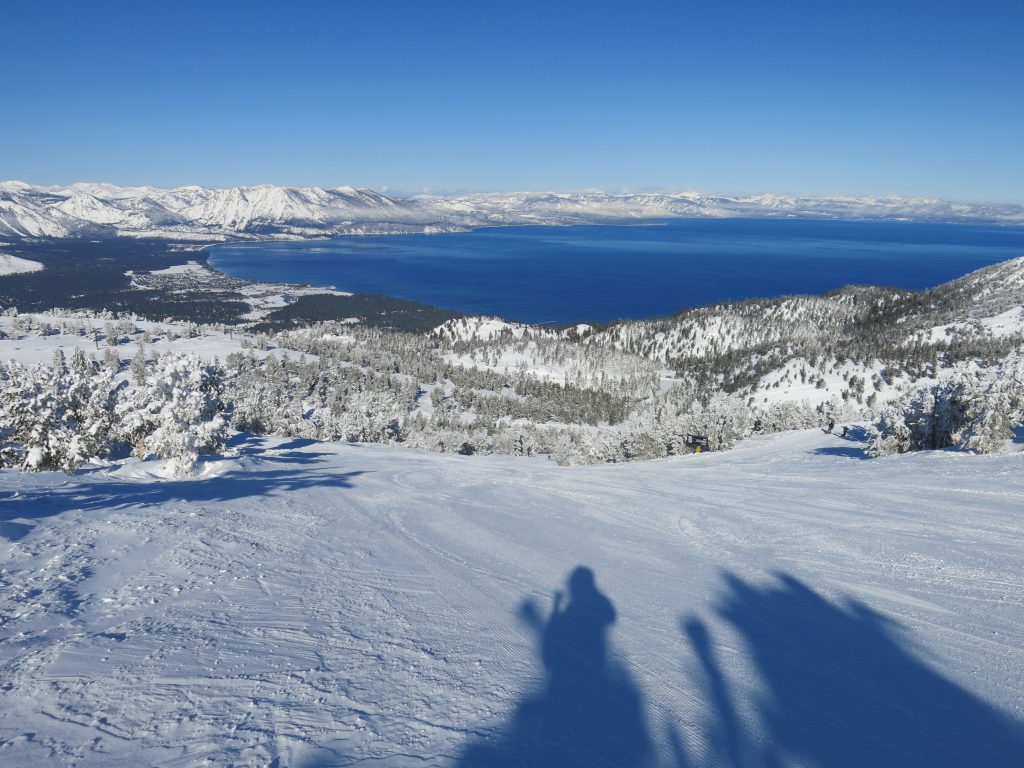 Just getting around was a challenge at times.  One Sunday in March we had some great powder skiing at Heavenly and then spent the next 1hr 45m driving 6 miles back to our house in a blizzard with gridlocked traffic.  Snow removal was difficult and we saw snow piles over 30-feet tall in the Kirkwood parking lots.  Heavenly had parking challenges all season because there was no place to put the snow. 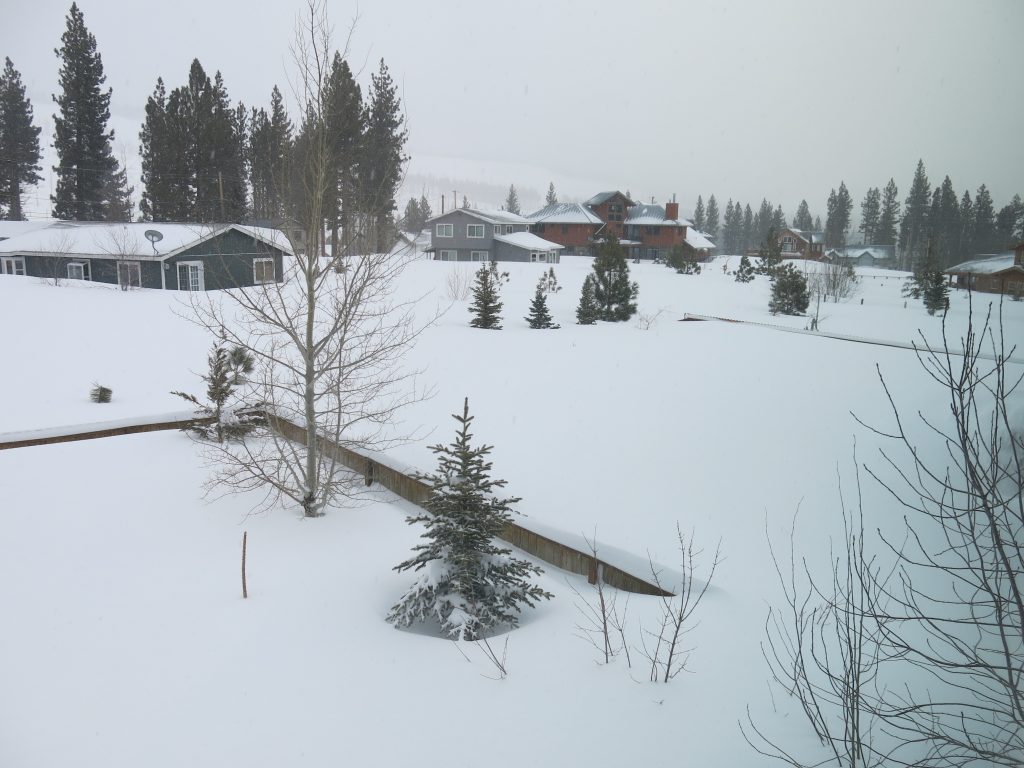 It kept snowing in March, April, and May, so we kept skiing powder.  April provided the best powder of the any month, and the massive crowds attracted by the record snowfall eased up making for the best skiing of the season. 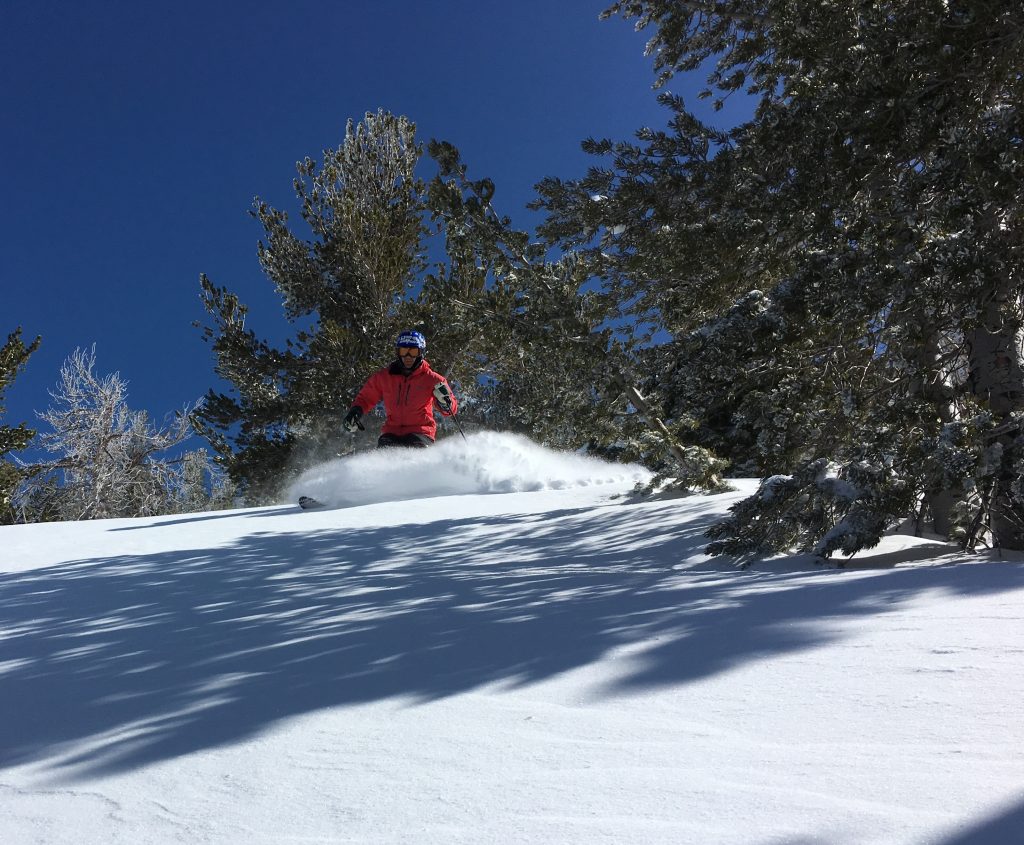 Kirkwood closed really early on April 16th with the deepest snowpack in the past 6 years still on the ground.   Heavenly opened one additional weekend so after they closed we had to head a bit further afield to keep skiing.  We had a great day in mid May at Mt. Rose, and then the best Memorial Day skiing we’ve ever had at Palisades Tahoe.  Amazingly, the Mountain Run and KT22 were still open (6,200′ elevation).  It was interesting skiing past Aspens in full summer leaves and green grass at the bottom of the mountain. 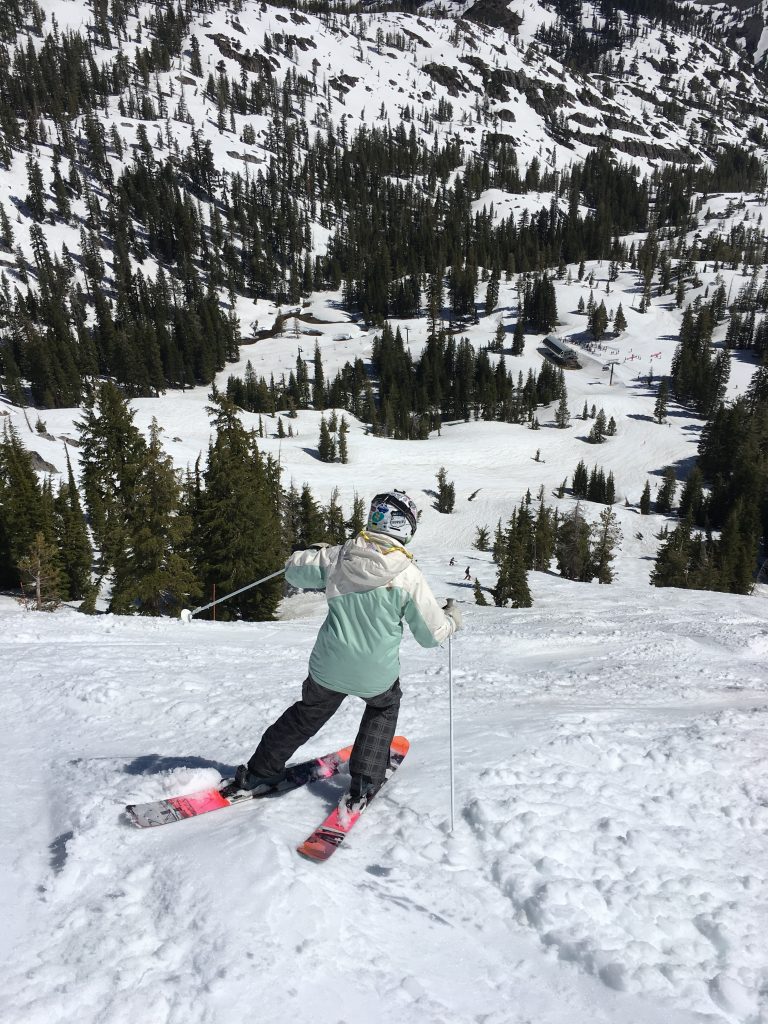 For only the 2nd time in my 48 years of skiing have I skied the July 4th holiday, and we actually did 2 days.  It was AiRung’s first time skiing that late.  July 3rd we went back to Palisades Tahoe where there were massive crowds on the limited terrain.  The party atmosphere was a blast though. 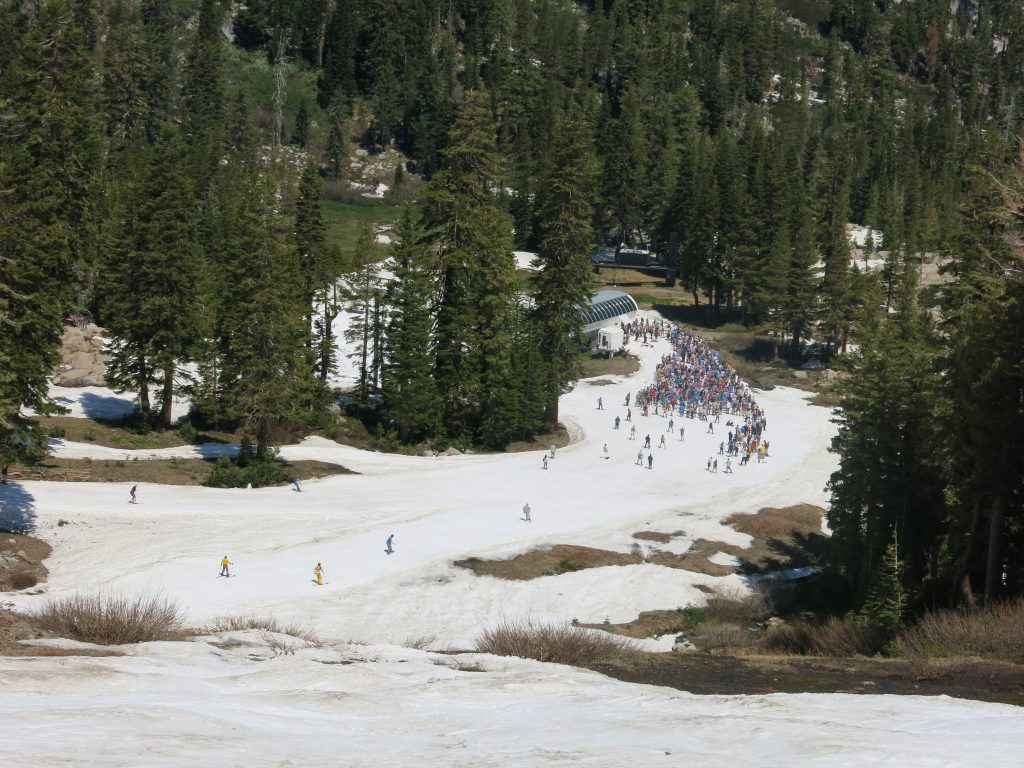 On July 5th we wrapped up the season at Mammoth.  2,000 vert of skiing on about 25 runs with no crowds and firm snow was so much better than Palisades Tahoe.  We camped in the RV park with our trailer and dogs, and were able to park the trailer in the Main Lodge parking lot, which was a good test for next winter when we plan to use it on our Big Trip.  They open early at 7:30AM this late in the season so we had breakfast in the parking lot and then skied until 11:30 which was 30 minutes from closing. 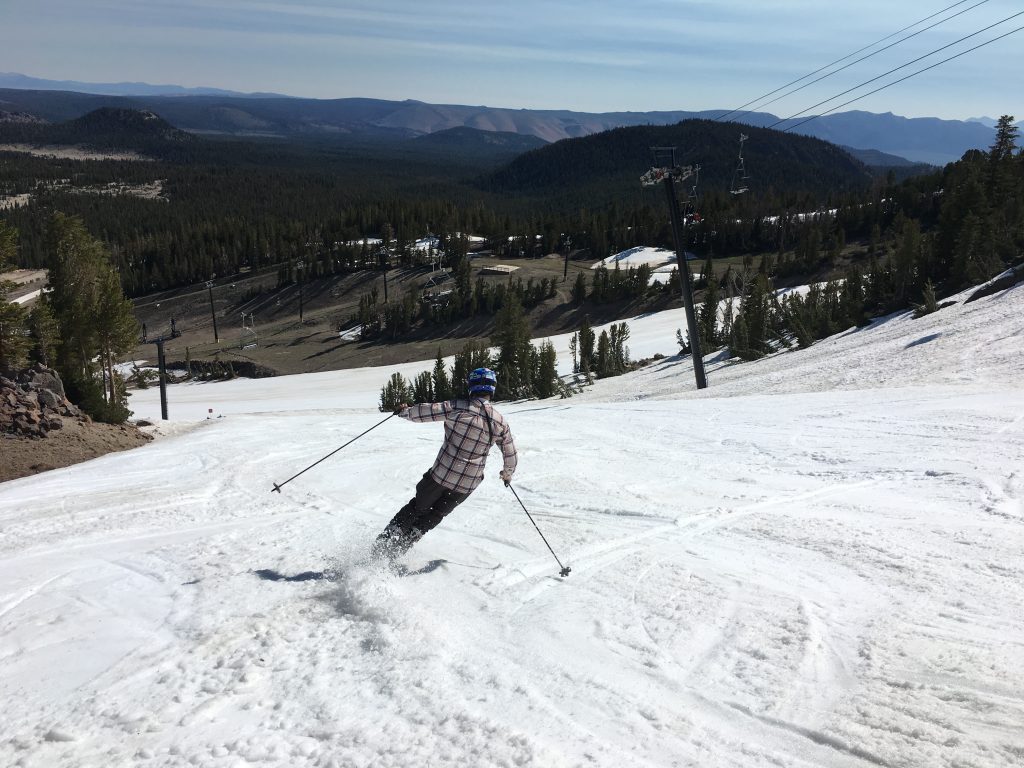 So the final tally for this season was 9 new resorts, 51 days for me, and 38 for AiRung.  We met a ton of friendly people and experienced some resorts and adventures we never would have if not for The Project.  A few highlights were Apex Mountain, Sun Peaks, and Silver Star in BC, Canada, night skiing at Mt. Hood Skibowl in Oregon, and powder skiing on runs like “Hogbacks” (below) that are seldom skiable (and never good) at Heavenly due to the record snowpack. 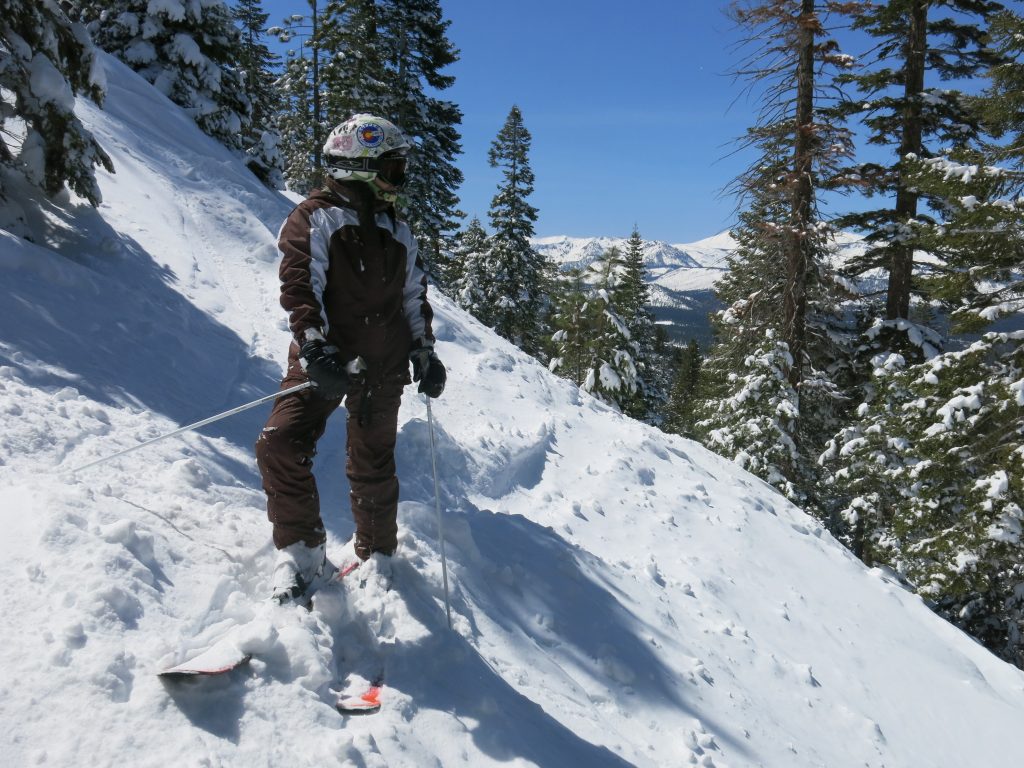 Our normal ski day in Tahoe starts early so we get to the lifts just as they open.  For Heavenly that’s 8:30.   We can get a few runs in before the crowds get large and we usually only ski until 1 or 1:30PM.  After a quick lunch at home, we head out with Sammy for X-C skiing in the neighborhood.  This year we could X-C ski in our neighborhood almost continuously from the beginning of December until mid-April.  In drought years past we might only be able to do a few select days, so this was something very special.  The first snowfall was October 1st and the last was June 11th. 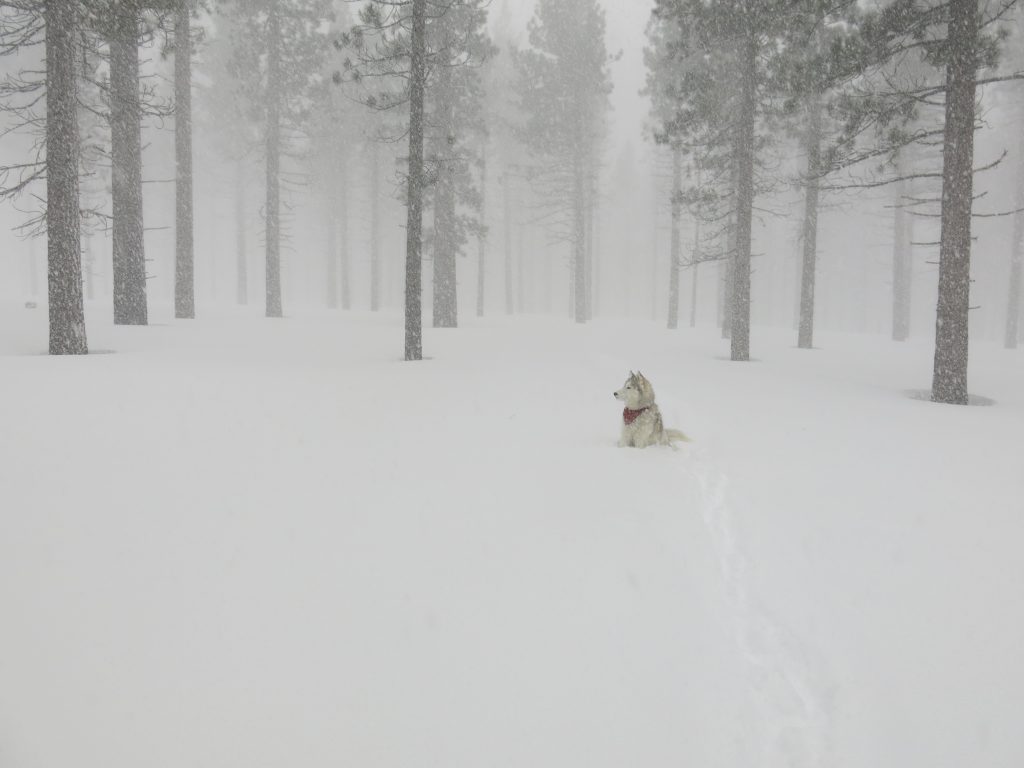 So now we need to wait out summer and start planning for next year.  64 resorts are done and we should make serious headway next year because we are planning to take a whole month to knock off some of the more distant resorts in Montana, Idaho, and B.C.  Can’t wait! 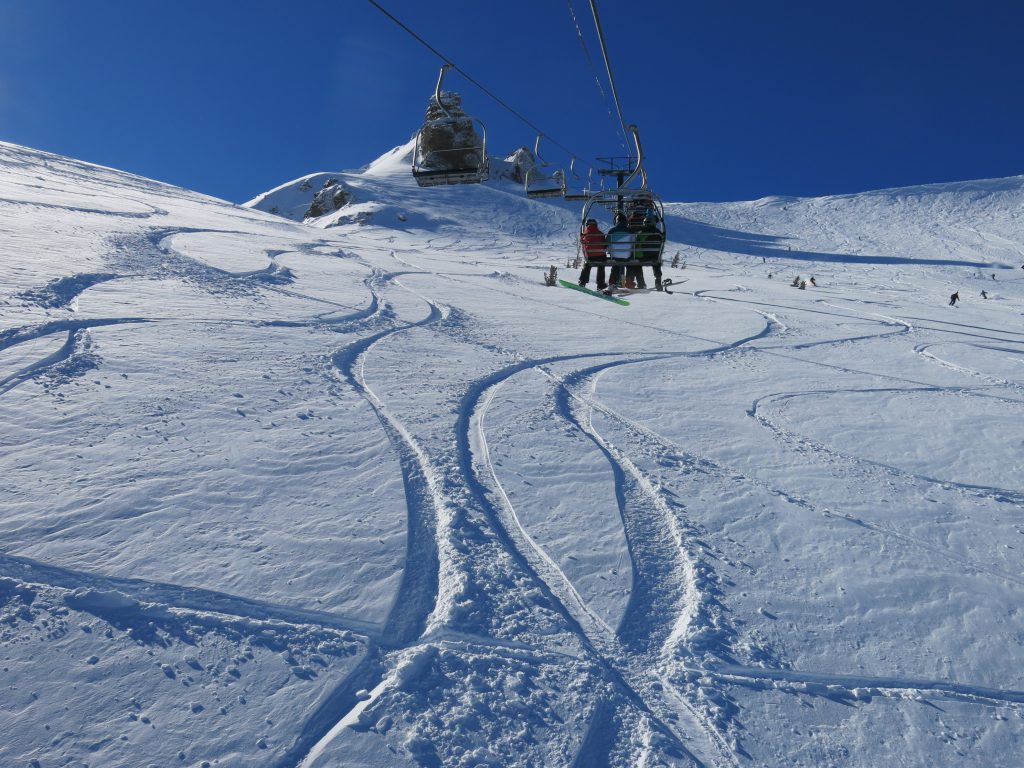