Our statistics for each resort attempt to compare apples to apples.  We pour over resort maps and boil it down to 5 important stats.

This is the actual maximum vertical you can ski without taking another lift, and without walking up hill.  Walking on flat-ish terrain counts as long as it’s something people skiing the resort regularly do.  It may take multiple lift rides to reach the summit but once you start descending the true vertical will be the end of your run.

A good example of real vs. published vertical is at Brian Head, UT.  The Giant Steps mountain portion has a real vertical of 1,200 ft served by the Giant Steps Express which reaches the highest elevation.  The base of Navajo Peak is lower by 120 ft which gives an unrealistic 1,320 ft vertical.  You obviously cannot ski the complete vertical in one run because they are 2 completely separate mountains.  We report this as 1,200 vertical.

The difference is usually small like in the example above, but in some cases like at Powder Mountain, UT it’s huge.  Powder Mountain lists their total vertical at 3,346′ but the true lift-served continuously skiable vertical without hiking is a much smaller 2,000′.

These are the distinct areas served by individual or multiple lifts.  Resorts can double up (or more) lifts next to each other and add them to their official stats, but that doesn’t mean much when you are skiing so we don’t publish those numbers.

Typically people do a few laps in each lift pod and then move on.  It makes for a much more interesting experience with more variety.

Here is an extreme example from Mt Snow, Vermont.  There is ONE lift pod outlined here, with 11 lifts. 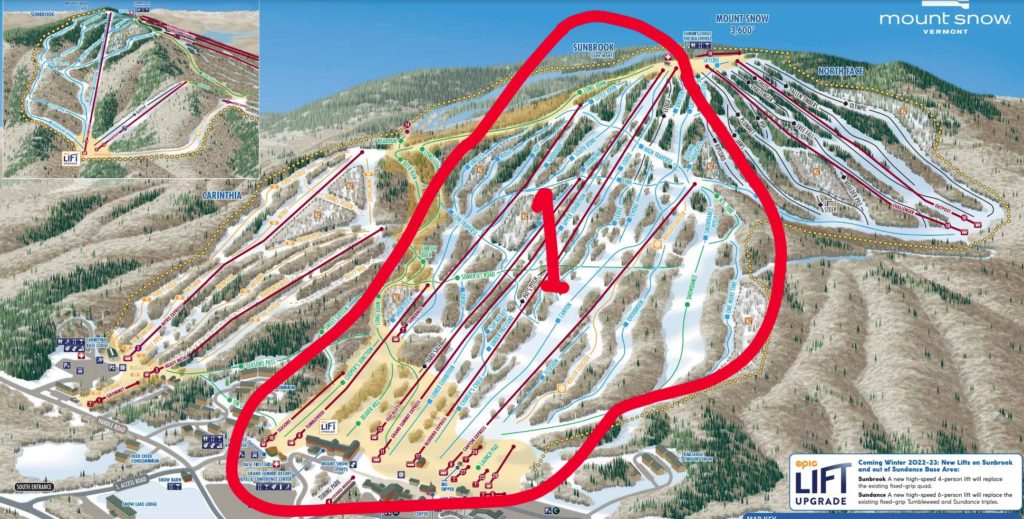 These are the runs you would experience skiing.  Sometimes resorts break runs down into “Upper”, “Middle” and “Lower” to increase their published trail count.  This is meaningless and confusing.  It’s pretty easy to pick out on a trail map but sometimes you have to ski it to get a true feel for what is a run and what isn’t.

This is the published number of acres from the resort.  It’s impossible to determine this unless you have the resort master plan documents, so we have to believe the resorts on this one.

This is shown as the resort reported number “claimed” and the number the well respected site ZRankings publishes as their best guess at actual snowfall “actual”.  Tony Crocker is a contributor over there and has his own site BestSnow and probably had a lot to do with those numbers.  When this is shown in red it is below the average on our list.  Green is above average.

Long ago we made our own attempt to compile these real snowfall numbers but with climate change it became too difficult to keep updating them, and our source OnTheSnow seems to have gotten less reliable at scraping snow reports in the past several years.